Kansas WR Justin McCay out to prove himself

Transfer receiver Justin McCay breaks through a line of defenders to catch a pass during practice on Tuesday, April 10, 2012. 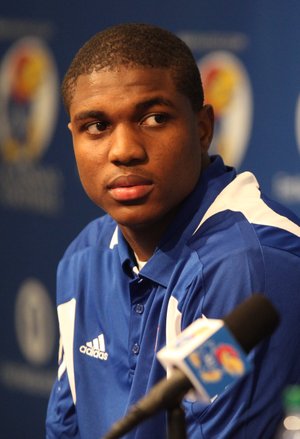 Receiver Justin McCay, a transfer from Oklahoma, listens as his teammates answer questions on Monday, Jan. 16, 2012 at the Anderson Family Football Complex.

Based on fan reaction, one of the biggest surprises regarding the Kansas University football program’s pre-spring depth chart was junior Justin McCay’s listing as the second-string X receiver.

The news did little to shock McCay.

“The depth chart is where they perceive us to be,” McCay said. “But we all gotta perform. You can go from last to the top, so the depth chart doesn’t really matter, you just gotta go out there and compete every day.”

That’s what McCay has done since he arrived in Lawrence, but because of the circumstances surrounding his transfer, it mattered little.

Dating back to January 2012, when McCay first committed to leave Oklahoma and join the Jayhawks, fans of KU football have been operating under the assumption that McCay could be a game changer. That possibility certainly still exists, but as the team heads into its second spring session under head coach Charlie Weis, McCay is one of the most significant question marks on the roster.

“Of the guys we have here and not the guys coming in,” Weis began. “The only unknown for us, really, is Justin, until he gets out there and we see what holes he has in his game. Last year at this time, when we went through spring drills, we were very disappointed.”

At the time, the 6-foot-2, 213-pound McCay not only was going through the process of leaving OU and relocating closer to his Kansas City, Mo., home, but he also was in the middle of a long and drawn-out battle with the NCAA for immediate eligibility. It never came, as both his initial waiver request and subsequent appeal were denied, leaving McCay ineligible for the 2012 season.

As soon as that was settled, McCay put his disappointment on the shelf and went back to work. The coaching staff noticed.

“He gained our support as time passed because he kept getting better and better,” Weis said. “I would like to think that Justin is going to press Andrew, (Turzilli) and Andrew better be ready to bring his A game.”

While McCay worked almost exclusively with the scout team last season, Turzilli took the first significant step forward in his career, finishing with 287 yards on 17 catches in four starts. He started slow, took off in the middle and faded at the finish. But whether he stays ahead of McCay on the depth chart or winds up working behind him, there is plenty of room for both players to play prominent roles in an offense that received zero touchdown receptions from its wide receivers in 2012.

McCay, who said it killed him to have to sit out while his teammates battled last year, believes things will be different this season. From where he sits, they already are.

“Oh, man, I’m super excited,” he said. “I’m just ready to get out there and show everybody what Kansas football can really do. Not just myself. It’s not an individual thing at all. I’m just here to help the team out any way I can. I’m not a selfish guy at all. If I don’t play a down at receiver and I’m on special teams, I’m happy with that. I just want to play.”

McCay has the athleticism to do huge things. No doubt he has the ability to be a big time player who ends up in the NFL. If last year taught me anything though, it is to temper expectations. There is a lot of talent out there and for various reasons it doesn't always surface. McCay is a kid who didn't make an impact at OU, has been through a lot personally, and hasn't played a meaningful role in a football game in over 3 years. This could be a difficult transition for him. It's unwise to assume he's the second coming of Dezmon Briscoe.

That's not to say I'm not a fan. The guy is a Kansas kid, has been through a lot of adversity, and has amazing raw talent. I'm definitely hoping for big things!

I also will give a little more credit to the depth charts implications. Jake Heaps is listed as the unquestioned starter. I don't think Weis screws around with those things.

If you recall last year, the depth chart changed quite a bit and will likely do so this year. The depth chart does show what the coaches are thinking now, so the position is Turzilli's to lose. I really liked Turzilli last year, he made some nice catches when not a lot else looked very good on the team. I hope both players continue to get better and both play well for KU.

I expect that both McCay and Turzilli will play a lot of snaps all year. They likely would both end up listed first string if Weis weren't committing to a two back running game this season.

They likely will share the load this year. Even if McCay separates himself from the other receivers I doubt that it will take much away from Turzilli's snaps.

I hope that this kid has the ability to get open.

There was a video posted last season of the receivers doing up/downs in practice. Watching McCay was alarming. He didn't look like he belonged on the field. After reading the article above, and reading between the lines of anything said about him in the past year, I'd be surprised if he makes an impact of any kind in the fall.

Yawn... blah blah blah, we'll see if he has anything when the games start.

It's real clear as to what your expectations are; there's only two:

Get open and catch the ball when it's thrown right at you.

Doesn't get much simpler than that.

As a matter of fact, I want to stress that if you do these two simple things, you'll not only be a starter, but you'll be an instant super star.

I't been four years since I've seen a receiver that could do both in the same game.....at the University of Kansas that is.

3 is often missed - block someone downfield, but vital none the less.

Sorry about the font. Don't know how that happened. I'm really not mad and the music isn't loud enough to need to shout.

it does this if you lead a line with the # sign or with a numeral.

I always thought that with McCay on the scout team and Heaps being the most likely starter this upcoming year, that it would help with their timing. Basically, a red-shirt year for both of them, where they get to work on mechanics and timing.

Hope it works out for both of them. I still think McCay got a raw deal, but I'm hoping that it turns into a positive move for him.

I really hope the coaching staff puts emphasis on hand-eye coordination and strengthening the hands on McCay. From what I understand, there were talks of moving him to LB at OU since they were so stacked at WR.

Really hoping the depth chart is a motivational tool to get this kid going.

Rock Chalk we are going bowling!!!

Hope he can play like he did and contibute to the team, kid has too much talent and (sounds like) good head on his shoulders... good luck