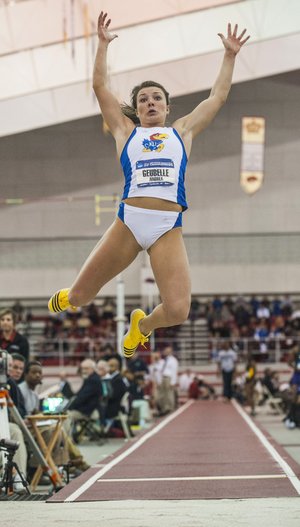 Kansas’ Andrea Geubelle competes in the long jump during the NCAA Division I Indoor Track and Field Championships on Friday, March 8, 2013, in Fayetteville, Ark. Geubelle won the event with a jump of 21 feet, 6 inches.

Geubelle’s best jump was 6.55 meters, Simpson’s 6.41, as the duo combined for 16 points in the event, the most ever for Kansas in a single event at an NCAA championship meet, indoor or outdoor.

Alena Krechyk earned the KU women their first three points of the competition in the weight throw with a toss of 20.95 meters to finish sixth. Paris Daniels ran a 23.37 in the 200-meter final to finish eighth overall and claim one team point.

Kyle Clemons, the lone KU male competing at the national meet, turned in a semifinal time of 46.95 in the 400-meters to finish 15th overall.

The KU women will continue their bid today for the program’s first team title in NCAA history.

Big day, ladies. Congrats on the year so far, and good luck.

Congratulations to Andrea and the rest of the team on a great day one. Keep it up!

Congratualtion ladies on a great first day. A win in the 400 and two places in the triple jump and the championship belongs to KU. Good luck and keep up the good work.

i think Andrea needs to win the TJ...i don't think we have anyone else competing in it. Diamond probably won't win the 400....but a top three would be nice. we need the pole vaulter to go top 3, and then our 4x400 team to top three...and then we'd have a real shot.

NOt sure why you say she won't win...she's the defending champion.

I think Andrea has a serious case of: "Want to...", that I wish she could instill into the other student athletes.
Congrads Andrea!! 'You Go', Girl!