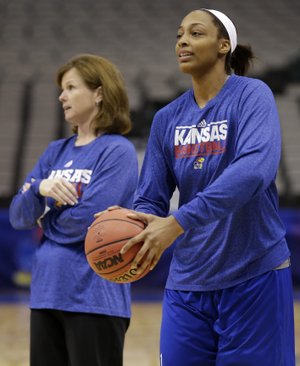 Beating a team three times in one season is no easy chore at any level of basketball. But if a Big 12 women’s basketball team must play the same opponent thrice, it might as well be TCU.

Tuesday’s victory ended a four-game losing streak in which KU opponents averaged 83.3 points per game, calling attention to the ineffective, hands-at-their-sides style of defense played by the Jayhawks.

Kansas ranks last in the 10-team conference in scoring defense (67.1) and ninth, ahead of only Kansas State, in field-goal percentage defense (.412).

Kansas needs tonight’s game to improve its sagging NCAA Tournament résumé. More than tourney bubble status was expected from a KU team that returned four starters from last season’s squad, which gained national acclaim when point guard Angel Goodrich led the Jayhawks to the Sweet 16 and trended on Twitter.

Goodrich, guard Monica Engelman and center Carolyn Davis all are members of the 1,000-point club, but Davis has been slowed by the effects of ACL knee surgery, and the team lost for the season starting guard Natalie Knight to similar surgery after she injured her knee Jan. 30.

Kansas appeared headed to a second consecutive NCAA Tournament appearance, but the recent slide means the WNIT is back in play as a possibility. Ninth-year Kansas coach Bonnie Henrickson has made the NCAA field once at KU. Her contract runs through the 2013-14 season.

After Tuesday’s victory against TCU, Engelman said, “We for sure needed to get this win. Now, heading into the Big 12 tournament, we need to go on a run.”

Davis didn’t view having to beat the same team a third time as a disadvantage.

“It gives us confidence going into the tournament to play them again,” she said. “We have the confidence knowing that we’ve beaten them twice, and we know what we need to do to clean up a little bit to get another win.”

You have to basically reach the Finals girls if you want to get back on the right side of that bubble.

Very disappointing season and certainly the coaching staff bears a load of the responsibility and the unlucky injury bug hurt plus losing yet ANOTHER player to transfer at mid-season as well but at the risk of being blasted by my fellow posters, the players must share part of the blame in this debacle of a season.

The lack of aggressiveness, save for Angel, is mind-boggling. Sometimes players have to overcome their own coaches to excel....unfortunately, this years team just couldn't do it.

In all honesty, I think the LadyHawks will have to get to the Big 12 finals and at least be moderately competitive with the Grinerettes to receive an NCAA bid.

I would be thrilled if someone can prove me wrong...please, fire away!!

We've seen vast improvement from our other women's sports including volleyball and most recently a Big12 championship in track. There is no excuse for the BBall team missing the NCAA Tourney. If Zenger wants to put more people in the seats at AFH, then he will fire Bonnie and hire a coach who can extract the talent from KU players. This team was/is loaded with senior leadership and 3 1000 point scorers. How do you account for their lack of success? It starts at the top. The other coaches in this league would have killed to have our seniors in their lineup AND they would have been successful.

My guess is that Hendrickson will coach next year mostly to get the signed players to enroll and for our sorry coach to finish her contract thus saving a bunch of cash. Certainly not the best reasons to keep her but reasons none the less

That said Hendrickson richly deserves to be fired that is a demonstrated fact. KU has wasted millions on her salary and ridiculous bonus.