Texas Tech head coach Chris Walker pleads for a call during the first half, Monday, March 4, 2013 at Allen Fieldhouse. 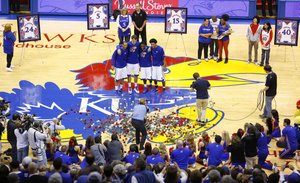 Without a hint of disappointment in his voice and a smile on his face, Texas Tech men's basketball coach Chris Walker sat back and tried to explain the takeaway from a 79-42 loss to Kansas University Monday night at Allen Fieldhouse.

“It's the most difficult situation probably in all of college basketball to come to Kansas on Senior Night,” Walker said. “But give Kansas all the credit in the world. Coach (Bill) Self's a great coach, and I just think they did a great job tonight.”

Despite keeping the game close for the first nine minutes, Walker's Red Raiders (10-18 overall, 3-14 Big 12) quickly found themselves on the wrong end of an old-fashioned run-away.

After cutting KU's lead to 13-10 with 10:54 to play in the first half, Tech was outscored 32-10 the rest of the half and 66-32 the rest of the game, with many of KU's points coming on plays that more resembled what you'd see in some sort of all-star exhibition. Elijah Johnson threw six first-half alley-oops and Kevin Young, Jeff Withey and Ben McLemore made sure each one was more than just a pretty pass.

The stylish onslaught not only helped the Jayhawks light up the scoreboard, but also put stars in the eyes of the Texas Tech players.

“The moment was a little tough for our guys,” Walker said. “I thought we had some chances early, but we didn't capitalize, and then it snowballed after that. It was just open season.”

Tech, which shot just 26 percent for the game, tallied nine baskets and nine turnovers in the first half and added five field goals and five throwaways in the second. The Red Raiders' ineffectiveness only aided KU's aerial attack, and each Jayhawk alley-oop seemed to pump the venue's volume louder and louder.

“That's what they do,” Walker said of KU's lob dunks. “They did get more than we anticipated, and we lacked a little bit of toughness that could have negated some of those things.”

All of that and more was on display Monday night, as the Jayhawks and 16,300 adoring fans said goodbye to four senior starters and may also have watched freshman phenom Ben McLemore play the final home game of his college career. With the game firmly in hand and the love-fest in full swing, Self pulled his starting five from the game with 4:45 to play. But even that did nothing to comfort Walker, who was asked if he took any joy from the fact that he would not have to face those five again in the coming seasons.

“They said that (a few) years ago and they won the national championship,” he said with a shrug. “Kansas is Kansas. I hope they get everybody. That's what we're here for. You want to play the Kansas and Dukes of the world. They're always gonna reload. ... They're trying to win a national championship, and we're trying to show every single night that we can come out and be competitive.”

“Kansas is Kansas. I hope they get everybody..."

Was it just me or did Wiggins look like he wasn't enjoying himself every time they showed him.

Name the last recruit you saw having the time of their life on a visit.

He would be having more fun if his parents hadn't come along :)

The last time they showed him he was laughing about something with his parents. The prior times I saw it the same as you did. That may be a studied look given the situation, though.

Someone pointed out to me that players like that want to be playing. Watching from the stands isn't as much fun :)

SportsCenter has all the Top Ten content they need from this game alone. You could even give Tech two or three spots--they had some nice lobs. I give Kevin the top spot for the reverse jam.

I will go with Withey posterizing the defensive player with a monster dunk.

I loved the team reaction to Withey's slam, especially the shot of EJ laughing as he pedaled back up the court.

Withey could have gotten a T for taunting after that dunk, but that would have just gotten the team more juiced.

...and then the Bad Ass stare down!

Agreed. Kids never show their cards on these visits. Honestly, most of them probably don't like watching games in which they feel like they would already be better than most of the participants.

When Bill intro'ed Travis for the final senior speech he raised his voice & said "the ROCK of this team." A great tribute to a guy that did everything asked of him, including a red shirt year that generally no one wants. Rele said in his farewell that there were times he thought about moving on to somewhere else. Damn we're glad he stuck it out. If they can go all the way to the NC game that'd be about 10, more games-almost another 4th of a season. Hope there's enough gas in the tank to win at least the final 6 in a row. First off, they need to whack the Wacko Bears for the 9th straight Conf Championship. Geeze louise, that is just unheard of!

It would be great to land Wiggins, like bread from heaven--but he'll follow his parents and go to Florida-State. It would be better to land Randall, the meat and potatoes missing from next year's crew, and we need him even more.

I have to quit walking in on the wife when she's watching the food channel.

Imagine if Trevor Relefords recruiting didn't come at the height if Travs disillusionment over pt... We could have used him this yr...

I didn't think that Bill Self recruited Trev. Or maybe he would have if Travis had been a major factor at the time.

I remember it that way, too. It seemed to me that there was little-to-no interest in Trevor at that time by Bill and staff.

Does anyone know how many games we are behind Kentucky for most wins? Seems like we have done some catching up this season.

A good conference tourney and NCAA tourney could put KU real close, cause KY ain't going no where...

UK likely will win another 2-4 games this year (if they don't end up in the NIT). KU likely will win 6+ more so we could very easily cut the gap to single digits if UK get into the NCAAs as a 10 or 12 seed. UK could wind up with a play-in game during the first round though that could get them an extra game on the season. Also they should have a high seed in the conference tourney which should score them a couple wins.

Couldn't say it better myself.

So, Chris Walker said the right things in trying to get in line for an assistants job with Self, if Tech whizz cans him. And telling his players not to rough Selfs guys up as KU makes its title run probably got Walker a phone call from Self to tech's President saying Walker would be a good keep.

Are you basing this opinion on just one game? Bardo has been consistently horrible all season except for Monday night while reminiscing about his own senior day at Illinois. (And even then it was just a chance for him to talk about his one true love, the B1G.)

Then again, compared to the rest of the jokers, I suppose he might be one of the best we've had.

When one is talking about announcers, how can one overlook: