Mark Mangino back in coaching 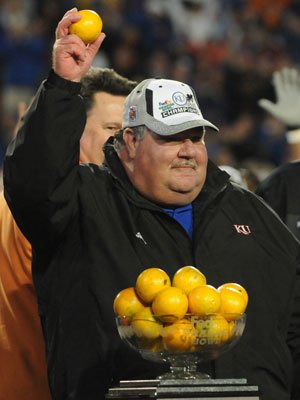 After sitting out for three full seasons, former Kansas University football coach Mark Mangino is back in coaching.

Mangino, who resigned his post at KU under pressure following the 2009 season, was hired as an assistant on Friday by Youngstown State head coach Eric Wolford, the school announced in a press release.

A native of New Castle, Pa., Mangino had been linked to jobs across the country during the past couple of years, but nothing materialized because of his desire to spend time with his family and focus on his helping his wife, Mary Jane, fight cancer. The one job that lured him back to the game comes at a program and in a region where Mangino has strong personal ties. He graduated from YSU in 1987 and also coached two seasons at the school with Bill Narduzzi and Jim Tressel.

“This is a homecoming for me,” Mangino said in the press release. “I’m delighted to be at a great school with a great football tradition with a team and coach poised to do great things. Every coaching job I have ever taken was a rebuilding project, but this program is not rebuilding. This program has the potential to have a very good year and that’s a credit to Eric Wolford, his staff and his team.”

Mangino will serve as an assistant head coach, tight-ends coach and recruiting coordinator for the program that is run by a former Kansas State player whom Mangino coached and later worked with during his days in Manhattan.

“I am a big believer in Coach Wolford’s ‘no shortcuts’ approach that focuses on getting results on and off the field,” Mangino said. “This school is near and dear to my heart and I’ll work very hard with Coach Wolford to get the job done.”

During his eight seasons in charge of the Jayhawks, from 2002-09, Mangino finished with a 50-48 career record. Mangino’s crowning achievement at Kansas came in 2007, when he guided the Jayhawks to a 12-1 record and an Orange Bowl championship and was named the consensus national coach of the year.

Probably shouldn't have let him go. If you win an Orange Bowl at KU, you get a lifetime contract.

Best of luck to the Buddha. Even though I never wanted to see him go it seems like it might all work out for the best for him and his family in this instance.

Glad to see the big man back. I am not into shouda, coulda or woulda. Weis is our coach now. I think there is a scripture that says, "all things work to the good when you are a Jayhawk".

We won't miss him a couple years from now.

Good luck Mark! I guess I'll have to change my login now.

Way to go, Coach! Glad you are back!

Wow. Figured Mangino would get a lot bigger job than this one, but maybe he didn't want anything bigger.

It is probably that nobody would take a chance on this guy after seeing his track record of the way he treats players / people.

Perhaps MM didn't take a Head Coaching job at a D1 school because he was just burned out. If you just like the game, want to be involved without the spotlight and pressure Youngstown would be a good decision. Also tells me he values being part of a team and wherever he goes he just wants to be appreciated, while being there for his wife. Not all coaches are adept at the building and maintaining of relationships; maybe that was not his forte. But he did a pretty good job at KU and I suspect he will be at the D1 level again someday. Hope his wife is doing well.