Kings: ‘We got the best player in the draft’ in McLemore

The Sacramento Kings are taking another chance on a Kansas product with potential. 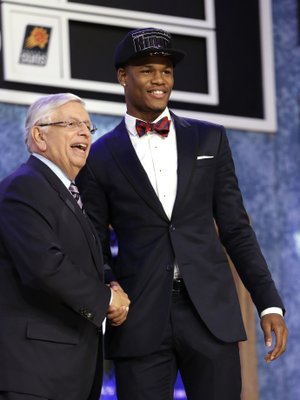 NBA Commissioner David Stern, left, shakes hands with Kansas' Ben McLemore, who was selected by the Sacramento Kings in the first round of the NBA basketball draft, Thursday, June 27, 2013, in New York.

“Seven is my lucky number,” new Kings owner Vivek Ranadive said. “When I was at the Warriors we got (Stephen) Curry, (Harrison) Barnes at seven, my birthday is on the seventh, the Mayor (Kevin Johnson) was picked seventh, he wore the number seven and we got the best player in the (draft) at seven.”

New general manager Pete D’Alessandro hopes McLemore pans out better than predecessor Geoff Petrie’s previous pick that entered the league with a similar background and expectations. The Kings took Robinson fifth last June, but he struggled from the start and was traded to Houston in February.

Sacramento used its only second-round pick on another perimeter player.

Both players come to a Sacramento team coming off seven straight losing seasons and trying to rebrand itself under Ranadive. More than 2,000 fans, most just happy to be back in Sacramento’s arena after the franchise almost moved to Seattle in May, cheered each selection.

The picks could be particularly useful if the Kings lose combo guard Tyreke Evans this offseason. Evans, the 2009-10 NBA Rookie of the Year who has been saddled with knee injuries and inconsistency ever since, is set to become a restricted free agent if he declines Sacramento’s qualifying offer as expected. Evans didn’t attend Sacramento’s draft party.

D’Alessandro said he hopes Evans is back and that the two picks shouldn’t be interpreted otherwise.

“We wouldn’t have gone this direction if we thought there was a clutter,” D’Alessandro said.

The new guards also could complement talented but volatile center DeMarcus Cousins — who is eligible for an extension this summer — on the outside.

D’Alessandro had McLemore No. 1 on his draft board since he scouted him with Denver’s front office. Ranadive said they even contacted other teams to try to move up in the draft before McLemore was taken.

When Cleveland surprisingly chose UNLV’s Anthony Bennett first overall, D’Alessandro turned to new coach Mike Malone and said, “I think we have a chance to get our guy.”

The 6-foot-5, 195-pound McLemore gives the Kings an elite shooter and gifted athlete with tremendous upside, though one whose ball-handling skills and ability to create his own shot have been questioned.

The second-team All-American broke Danny Manning’s freshman scoring record at Kansas while shooting nearly 50 percent from the floor and 42 percent from 3-point range. McLemore averaged 15.9 points, 5.2 rebounds and two assists on a team that went 31-6 and won a share of its ninth straight Big 12 title.

Most scouts touted McLemore’s resume and expected him to go in the top three. Even the world’s most well-known player wondered what was up when McLemore began to slip.

The four-time NBA MVP also wrote that McLemore would fit perfectly with Malone and assistant Chris Jent, who were on the Cavaliers staff when James played in Cleveland. McLemore attended James’ basketball camps and said he has known the Miami Heat star since his junior year in high school.

While he obviously hoped to be drafted higher, McLemore said he looked forward to coming to Sacramento’s re-energized fan base and proving the six teams that passed on him wrong.

“I want to come in and show everybody what I can do, because I know on the court I know what I can do,” said McLemore, who wore a sharp suit and bow tie in Brooklyn to shake NBA Commissioner David Stern’s hand on stage. “I can be an alpha dog and take over games and help my team win games.”

McLemore said Robinson often gave him advice about the NBA — he just never knew it would also come in handy in Sacramento.

“He was just telling me it’s hard,” McLemore said. “It’s going to be hard when you first get in, but you go to work. You got to keep working.”

McLemore was forced to redshirt during the 2011-12 season when he was declared a partial academic qualifier by the NCAA, but he made the most of his only season in Lawrence. With a dizzying array of dunks, a silky smooth outside shot and a boyish grin, he quickly became one of the school’s top players. He even graced a regional cover for Sports Illustrated prior to the NCAA tournament.

But some reports suggested the 20-year-old McLemore, whose rise from the neighborhood playgrounds in an impoverished St. Louis community has been well chronicled, was out of shape during pre-draft workouts; Sacramento’s new staff never had a private workout with McLemore. He also perplexed some scouts with his inconsistency — starring one game, then disappearing the next.

McCallum might be considered more of a project than a proven product.

The Horizon League Player of the Year led Detroit with 18.7 points, 4.5 assists and 1.9 steals last season. He played at the university under his father, also named Ray McCallum, passing on more prominent scholarships after earning McDonald’s All-American honors — and wowing in dunk contests — at Detroit’s Country Day School.

McCallum’s outside game still needs some work. While he shot 49 percent from the floor last season, he was just 32 percent from 3-point range.

In the end, the quickly assembled Kings management team felt satisfied with its work.

“We got better today with the two young men that we drafted,” Malone said. “From a talent perspective to a culture perspective, we have just added two young men who will make this team better.”

I really hope Sacramento can give Ben the kind of tutelage he needs to become the All-Star he CAN BE. Really wishing McLemore the best, dunno about the Kings....we'll see....

I became a James' fan at least for one night. I think LeBron knows talent and it was nice to see him give Ben some props as well as Jay Bilas throughout the night. Both Ben and Jeff have to work hard to make it in the NBA, especially Withey, but hopefully both can shine. Rock Chalk.

NBA head scratcher, Archie Goodwin in the first round. Only heard negatives from UK fans throughout the season.

It's the double Mc. - glad he went in the top ten and hope he does well - either way he is now living a charmed life and hope he keeps his nose clean and remembers nothing good happens after midnight! -

SAC can start improving immediately by getting rid of THAT cancer...i.e., Cousins!!!

Yeah, The AP article kinda rips TRob. While he didn't have the greatest stat line, part of that was due to them having way too many bigs and having to cater to that petulent child Cousins. I was happy TRob got out of there and also a little disappointed BMac went in this year. Hopefully everything has changed with the new management and Ben has a chance to grow into a role and develop.

Is it fair to call TRob a Flop? It's been one season. I don't really watch the NBA so I honestly would not know.