Chayla, a 5-foot-11 guard, averaged 10.8 points while hitting 45 percent of her three-pointers for Rock Bridge’s Class 5 state championship team. Kayla, a 6-1 middle blocker, was named all-region as a junior. She also plays basketball.

“We wanted to go to school together,” Chayla Cheadle told the Tribune. “This is the place for us.”

Missouri and Alabama also offered scholarships to both players.

Outstanding young women ~ happy to have you as members of the Jayhawk family.

The "great and powerful Alabama." I don't think the twins were recruited to play football. KU's women's athletics in volleyball and basketball is on better footing.

DULUTH, Ga. - The women's basketball team ended its run at the Southeastern Conference Tournament with a 77-35 loss to No. 17 South Carolina on Thursday at The Arena at Gwinnett Center. The Crimson Tide finishes the season with a 13-18 overall record while the Gamecocks improve to 24-6.

I may be mistaken but don't we have another set of LadyHawk twins coming in...the Rodriguez or Gonzalez sisters???? I just remember something about them blogging with then recruit Mr. Randle and that both of them were Knockouts!

Someone please correct me if I am wrong!! 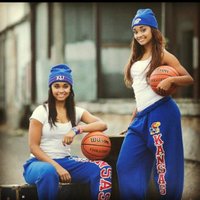 Why would they want to play in the SEC where there would be long trips to every road game? Smart move girls, welcome to the family!

I was wondering the same thing. This article is pretty ambiguous.

I wonder if they're related to the actor Don Cheadle. He's from KC, mo.

according to the Columbia Trib: "the Rock Bridge seniors-to-be gave verbal commitments to Kansas. Kayla will play volleyball for the Jayhawks, while Chayla will join the women's basketball team."