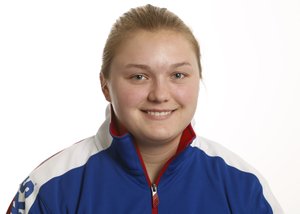 KU also had one individual and one relay team advance to the finals.

Through five of 21 events, Kansas’ top-ranked women have 22 points. Arizona State is in second with 20 and Arizona a distant third with 11.

Maroszek entered as the No. 5 overall seed. A junior from Seymour, Wis., Maroszek had only two legal throws on the day, but both were over 180 feet. Her better mark was 55.78 meters (183 feet), the second-farthest of her career, in the third round. She added five points to the Jayhawks’ team total.

Maroszek’s placement tied her for the highest NCAA finish by a Jayhawk and garnered her first-team All-America honors for the second time in her career. With Maroszek’s finish, the KU throwers have now combined for 16 of the Jayhawks’ 22 points.

Sophomore Lindsay Vollmer began her Championship week Thursday as she participated in the day-one events of the heptathlon. The Hamilton, Mo., product kicked off the event on a high note as she ran to a lifetime best in the 100-meter hurdles — 13.56 seconds.

Though four of seven events, Vollmer is in third overall with 3,569 points. Day Two of the event is today.

In Thursday’s semifinals, KU’s Paris Daniels advanced to her second straight NCAA 200-meter final. Daniels left little doubt in her right to advance when she won her heat handily, crossing the finish in a wind-aided 23.56. The time made Daniels the second-fastest qualifier and earned her a trip to the event final slated for 4:43 p.m. Saturday.

Daniels returned to the track later in the day to help secure the women’s 4x400-meter relay team a spot in the event final. Daniels, Denesha Morris, Diamond Dixon and Taylor Washington qualified fifth overall. That final will be 5:43 p.m. Saturday.

The KU men’s 4x400 relay team was the first team outside the final. DeMario Johnson, Kyle Clemons, Michael Stigler and Kenneth McCuin finished in 3:05.63 to place third in their heat, one spot from a trip to the final.

The NCAA article gives some insight into the entries each team has in the various events.

I was worried about losing Francine, but 3 of the top 5 have lost a top rank athlete to non-qualifying.

Diamond not making finals hurts us too!

J-W, please keep updating the news. It is very hard to find any live coverage on the events. Many of us are proud of the top-ranked women and are pulling for a national championship trophy to add to our hardware. Rock Chalk and personal best to all of our track and field athletes in Oregon!!

If you are on twitter the ku track and field twitter page does an amazing job of updating their results after each event. Whoever runs their twitter page should get a high five for their awesome and timely coverage! Their twitter handle is @KUTrack

It's on espnu tonight and tomorrow. You can follow on twitter, or go to meet central. It would be nice to hear some updates from coaches or athletes. They are the most successful KU team this year! Rock Chalk!

Don't know if I just heard on tv that Volmer has won the heptathalon or not? C'mon Bro, can I get a witness???

She did. If you want more timely updates there is a good track and field thread on phog.net that everyone is posting in.

Yes! 10th best in NCAA history, 1st national heptathlon win for ku! Awesome news! Andrea and pole vaulter 2nd. Stigler 2nd in hurdles. The announcers were all Oregon, no respect! 3 events tomorrow, we can do it! It's on espnu at 4:00