Kansas' Mario Chalmers and Sherron Collins celebrate after beating Memphis on Monday, April 7, 2008 at the Alamodome in San Antonio, Texas.

Former K-State player Rodney McGruder and Missouri’s J.T. Tiller and Leo Lyons also are slated to play. Chalmers and Ronnie Brewer will be coaches, while former KU guard Ben McLemore is expected to be on hand as a special guest.

“I like it a lot,” Wiggins said in a question and answer with Slam Magazine conducted last week at the Gatorade Player of the Year ceremony in Los Angeles. “Lawrence is a college town. People there don’t show you anything but love. The practices (two hours per week in accordance with NCAA rules) are really hard. We have the best strength and conditioning coach in the country. Every day in practice (pick-up games) we go hard. I’m a freshman so I’m trying to take someone’s minutes and they’re not just going to let me take their minutes. So I have to go out there and go hard and be hungry. I think we will be a special team.”

The No. 1-ranked prospect in the recruiting Class of 2013, who is expected to be taken No. 1 in the 2014 NBA Draft, was asked, “who in your life reminds you to try and remain a kid through it all, to enjoy it?”

“God and my family. And my friends — the ones that treat me no different than they did 10 years ago. It’s good to have,” Wiggins told Slam. The Q-and-A is available at http://bit.ly/1beT22k.

KU’s basketball team is ranked No. 5 in the country in a USA Today preseason poll compiled by USA Today staff writers. Kentucky is No. 1 followed by Michigan State, Louisville, Duke, KU, Arizona, Florida, Michigan, Syracuse and Oklahoma State to complete the top 10.

Agreed... They have some major talent and experience.

Okie State has ZERO good big men. They will be one of the worst rebounding teams in the nation next year.

I have a feeling this is going to be the year of Wiggens & Ellis. I see both of those guys being All Big 12 monsters.

Here is my best guess at the preseason Top Ten Basketball College/ShoeCo rankings:

End Note: kind of conspicuous that Adidas is incurring so much blow back for what goes on in Indonesia, when Nike is not, in Blue State schools, where so much Red State and reputedly Koch monies were dumped recently to turn Wisconsin and Michigan into Red States, albeit unsuccessfully so far. No, wait, I forgot! Everything is about football TV revenues, right? :-)

Syracuse and Okie St. are both Nike. Being an adidas school in football because Nike, adidas, and Under Armour don't manufacture most of the high school football teams like they do with AAU teams in basketball.

Andrew Wiggins evinces a fine media presence. KU athletics is fortunate in that regard, as the mics and reporters' notebooks will constantly track him down. Andrew is the face of KU this season; hopefully, in a very positive way for a long time.

I liked reading that it's his friends who have always been his friends, not new ones popping up as he becomes famous, that he counts on.

Apparently Chalmers is too old to play in his own "all-star" game? Lame.

I'm going wiith the theory that he's protecting his health for his NBA value. Do you really think he couldn't participate with the lineup listed or even anyone else who might show up? What does that say about The Heat?

Eh, Chalmers isn't going to risk an injury in an offseason all star game appearance. He may not even be ALLOWED to play per his NBA contract.

Yep! Planning on being there.

Every day in practice (pick-up games) we go hard.

I always wondered why nobody (esp. past players) has written in detail about what the "off-season" (summer) is like in terms of how structured and intense the program is for these guys. Obviously pick-up games are required, in addition to supervised two or three weight training and flexibility/strength sessions a day, plus regular one-on-one personal strategy and development meetings with the coaching staff, sports psychology sessions, plus???... I guess the point is that even though coaches can't officially be present for he on-court stuff, the players are deeply entrenched in an intense basketball development regimen pretty much full-time during the summer months. I'd like to hear more about it, without, obviously, compromising any NCAA compliance since permissible/impermissible details are touchy.

I agree, those details would make an interesting write-up... Jesse, get on it! ;)

Champions Classic will indeed be impressive once again:

Wow. I need to get tickets!

That has to be one of the biggest jumps ever...ousted out of the NIT first round, to being #1 with probably 4-5 starting freshman. I'm not saying they aren't a good team, I'm just amazed at the jump. I know every team loses players and gains players. I would probably have Michigan State and Louisville ahead of them currently.

OSU will definitely be interesting this year. They could be the stopper or they could end up fifth in the conference. You never know with some of the players they have. They can shoot lights out or 10%.

The more I hear Wiggins talk, the more I like him. I know his parents have to be extremely proud of him. He has his priorities in order and his head is not in the clouds. I believe he is going to have a very special year. My advice to all you fans; don't bug him all the time. Let him enjoy his college experience. Enjoy this year.

Would it be unthinkable to get one of the writers to do a piece on how the team looks so far in practices? Don't those guys do it for the football team? Why not basketball?

Oh yah, one more thing. Chalmers could coach and play in his own game! Its been done before right? RCJHGOKU

I Love this quote: "I’m a freshman so I’m trying to take someone’s minutes and they’re not just going to let me take their minutes."

Andrew, we all know you're gonna start, the teammates all know it, but that is the best attitude to have, always go hard. I doubt some of those players of at Kentucky have the same "I have to work for it no matter what attitude", especially playing for Calipari,

I'm just scratching my head trying to figure out whose minutes he's referring to that he's trying to take. Andrew White is the only scholarship, non-freshman wing on the team that I can think of.

RE: "I doubt some of those players of at Kentucky have the same "I have to work for it no matter what attitude", especially playing for Calipari,"

Considering UK has 3 McD AAs on the 2nd team that can easily be starting for about any team in the country, Cal won't have to worry about that kind of attitude on this team.

Make no mistake, Cal learned a valuable lesson after the 2012 season that he cannot protect players (Harrow) by not signing recruits and he has acknowledged such. Having only 8 scholarship players (7 players after Noel goes down with a season ending injury) on a team doesn’t provide the day-to-day competition a team needs to get better throughout the year. Cal has already offered 11 players in the 2014 class a scholarship which is unheard of (even for Cal) and you won’t see the 2012 situation again as long as Cal is at UK. I believe Self also learned a lesson from the 2012 Championship game that he needs to sign better talent to win National Championships and has done so. In regards to the NC game, when you’re down double digits for a majority of the game (to 3 freshmen) and down 15 points with 5 minutes to play, you’re not winning many games if any.

What matters most in understanding and supporting Andrew Wiggins is to remember that no matter how much he looks like an American from USA, he is an American from Canada. It is a profoundly different culture that seems quite similar on the surface. Be as compAssionate and understanding to Andrew as we were to Sasha Kaun, who also seemed so similar superficially, and all will go well. Like Sasha, there will be times when his quotes seem a little different than expected, and his responses somewhat different, despite him being all Jayhawk and a terrific player. Let it be and viva la difference. Naismith was different too. All real Americans Are different. That's what makes us able to absorb the world and get better! Rock Chalk!

How many days till Late Night?? Could someone please just post the days left on each article follow?

A countdown clock on the web page is a great idea!

Watching a small portion of this video makes me miss Danny's coaching ability with the Bigs.

ralster, I agree with evertthing you say. what I miss about Danny was the fact he was the one the bigs could talk to and play against in practice that could impart a tip, a big man perspective. Self knows what he wants from the bigs, Whenever TRob and Cole would come out of a game the camera would show them sitting next to Danny and being coached until they went back in the game. Self is the best motivater in all of basketball and Jay Bilas calls him the best coach in basketball, but Danny was the the sargent whom the troops could talk to. 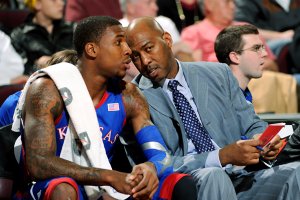 Do people honestly believe that Self "learned" in the 2012 Natl Championship game that he had to recruit elite talent and that he only started trying to do so after that loss?