Strength and conditioning coach Scott Holsopple calls out stretches as the Jayhawks get loose for practice on Wednesday, Aug. 15, 2012. 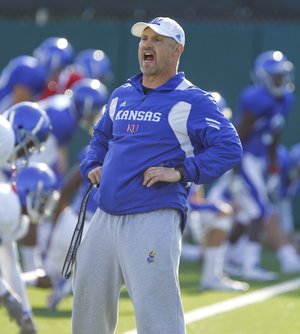 Strength and conditioning coach Scott Holsopple calls out stretches as the Jayhawks get loose for practice on Wednesday, Aug. 15, 2012.

Never one to shy away from searching for new motivational tactics, Kansas University strength coach Scott Holsopple has come up with a couple of doozies this summer.

The first, a red-white-and-blue-clad Firecracker Workout back on the Fourth of July, was in line with the Valentine’s Day Massacre and other holiday-themed training sessions that have become the norm in the KU football weight room since Holsopple’s arrival a year and a half ago.

“We had a little Fourth of July bash,” senior defensive tackle Shane Smith said with a bit of sarcasm in his voice. “There wasn’t as much celebrating as there was sweating, but we had a lot of red, white and blue and fireworks and music blasting over the speakers. We got ourselves a nice workout in.”

The second, which Holsopple implemented for the first time this summer, was a Big Brother program in which established veterans of the squad are paired with newcomers and charged with showing the rookies the ropes on how things are done.

“The new guys, juco guys or freshmen coming in out of high school, he gave ’em a big brother just to kind of help them with the transition,” said Smith, noting that freshman offensive lineman Joe Gibson, of Rockhurst High, was his partner. “Anything they need, you’re there for ’em because it definitely is a culture shock.”

Walk-on kicker Austin Barone was not paired with a newcomer but said junior-college transfer Trevor Pardula, who arrived on campus in January and seems to have a leg up on KU’s punting and kickoff jobs, was assigned Hutchinson Community College place kicker Michael Mesh when Mesh arrived in Lawrence earlier this summer.

“Trevor Pardula took (Mesh) under his wing and really treated him well,” Barone said. “We (wear) these pride bands (on our wrists), and if you’re a newcomer, you wear yellow. But Mesh has already been moved up to the red and hopefully soon we can get him up to the blue.”

The idea behind both programs — and, really, Holsopple’s entire philosophy in the weight room — was to create a bond between the players that cannot be forged through running drills or studying film.

“Coach Holsopple and the strength staff have really been pushing us, and I think that’s helped bring the team together and bring some camaraderie,” Smith said. “If it has been a tough workout or a tough run, they really push to make us pull together as a team and get through it. And I think that’s been good and is really gonna help when we get into camp.”

Asked how this summer compared to the first summer under Holsopple a year ago, Smith said things had been considerably more intense.

“They’ve turned it up,” he said. “Maybe a couple notches. We’ve been told that this was about to be the best summer in college football, and that’s what we’re trying to make it.”

Added Barone, who did not go through summer workouts last season but has talked to plenty of upperclassmen about the past: “From what they’ve told me, it’s night and day. The unity that the team’s formed, the camaraderie … the difference between a walk-on kicker and the starting quarterback, when we’re working out and we’re doing stuff together, it’s no different. If you’re a part of the team, you’re a part of the team. It’s awesome.”

Smith said the guys who have stepped into the biggest leadership roles this summer are the ones most would expect. Quarterback Jake Heaps, linebacker Ben Heeney and others who play prominent roles on the team and have been through it all before were singled out by Smith as the example-setters this summer.

“Holsopple’s been putting an emphasis on, ‘Grab all the young guys. There’s no transition period. Just grab ’em and pull ’em up,’” Smith said. “For the most part, the older guys have been stepping up, and it’s been good. We turn it up every day. That’s what our mentality has been, and it’s been going good.”

Thank you for taking the time out of your weekend to post an article on Saturday Matt!

But someone just in a job could try to get by with doing the minimum it takes to keep that job. Matt continually goes above and beyond, not only with his articles but in his replies to our questions. Matt is part of a good staff.

I liked Matt too until he neglected to post the Memphis game at the top of his list. Now... It's war. I challenge him to a joust.

Games aren't won on the field, they're won months prior in the weight room, glad to have a cold blooded killer like holsopple on staff!

Correct. But it's not just about lifting weights. I love Holsopple's "Big Brother" program! That's going to build terrific team chemistry which strengthens a team in more subtle, but essential ways. That's the kind of "out of the box" thinking that can really make a difference. I'm very impressed!

Holsopple is going to do for FB what Hudy has done for BB and that's the first step to our success.

Coach Holsopple may be the best hire that Coach Weis ever made concerning the football team.

Why does it say there are 11 comments when there are just 6 (now 7)? Has the comment count always been inaccurate?

Love to see that we have a great strength coach again. I thought firing Dawson was a huge mistake.

Was he fired or did Snyder see the opportunity during the transition and snagged him (Dawson)?

Chris Dawson was not retained by HCTG when he took over. I thought that Chris Dawson was one of the biggest reasons for the success we had during the HCMM years! Coach Snyder obviously saw his value and hired him. I agree with ShelleySue, it is great to have a legitimate Strength & Conditioning coach agaain!

As others have said previously, Holsopple might be the biggest weapon on our team/staff like Hudy is for the basketball teams. A lot of success in athletics comes from players knowing that they have prepared harder than the other team and that they can withstand the punishment during the game, get back up and keep going. The players all seem to have totally bought into his philosophy and plans to get them in better shape for the long season. I'm certainly excited to see how year two under his training will pay off since there were times last year where they just ran out of gas. Hopefully this year we'll have more than enough left in the tank and can power through to victory.

Holsopple will get everything he can out of these kids. Holsopple trained me while I was at Marquette. Since then, I've never had a challenge in any facet of my life that was tougher than a Holsopple workout. The man doesn't sleep in a bed, he does a wallsit and closes his eyes for a few hours. These players will turn into machines.

I didn't know Marquette had a football program. Was he roundball then?

He was the head strength and conditioning coach so yes he was basketball and other sports as well. I was on the soccer team, and years later I have bad dreams about bopple.

Looking forward to seeing what a Holsopple trained player can do on the field. Solid article Matt.

I remember hear years ago about the Nebraska strength program. The trainer was talking about certain kinds of muscles they were trying to develop over other types of muscles. It was the first time that I knew just how sophisticated these programs can become. I had always thought speed was speed, power was power but then it is more than that. But I knew when I heard this guy talking that he was the secret to NU's success.

Hopefully Holsopple's workout program will translate into more than one win this season and a few league wins.

Yeah, I just saw a tweet of the Big 12 football season saying KU would finish last and that their team only has a running game to fall back on. I don't follow KU FB at all but I hope its not true. Id like to see them do great this year and prove the haters wrong.