Kansas University strength-and-conditioning coach Andrea Hudy, top, works out with Sgt. Michael Pride on Wednesday during Pride’s visit to the KU campus. Pride is in town to pick up pointers from Hudy for the Wounded Warriors Project, for which he is a coach. 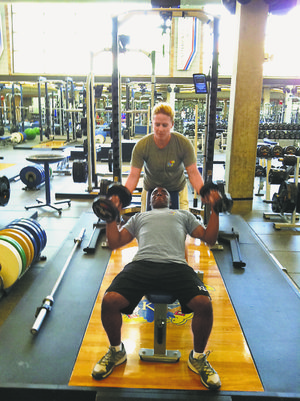 Kansas University strength-and-conditioning coach Andrea Hudy, top, works out with Sgt. Michael Pride on Wednesday during Pride’s visit to the KU campus. Pride is in town to pick up pointers from Hudy for the Wounded Warriors Project, for which he is a coach.

Sgt. Michael Pride, a 33-year-old Marine from Kansas City, Mo., who has been awarded the Purple Heart, Navy and Marine Corps Achievement Medal, Combat Action Medal and Good Conduct Medal, has been in Lawrence the past several days for instruction and conditioning — Andrea Hudy-style — on Kansas University’s campus.

The superbly conditioned former Wounded Warrior track standout’s goal has not only been to survive the workouts of KU strength-and-conditioning coach Hudy, but pick up pointers regarding techniques and philosophies of training to be used with Marines in general at Fort Leonard Wood, Mo., and athletes in the Armed Services’ Wounded Warrior Project, for which he is a coach.

“A week before I was told I’d be working with her, I read up on her, and, wow, I was surprised she’s not a Marine herself,” Pride said of Hudy, who is known as one of the most demanding strength-and-conditioning coaches in the business.

“She has a mentality of being a Marine. That’s probably why I clicked with her so quickly and so easily. Everything she says makes sense. You can see her results in all of the athletes that are here at Kansas University. I will take everything she has given me and try my best to give to the Marines back there.”

Pride learned a lot about leadership and training philosophy not only during Hudy’s July 10 speech at Fort Leonard Wood, but during his stay in Lawrence, which has included time spent with men’s and women’s basketball, volleyball, baseball and rowing.

“Basically, know your athletes before you put them through training,” Pride said of a major point stressed by Hudy and KU coaches. “Being in the Marine Corps, we believe everybody is on the same playing field. We don’t think about a sense of weakness. Here I’ve learned to have the attitude to know what my expectations are and what I’m trying to accomplish — to learn about them (each Marine) and know what they are capable of before I put them (through drills).”

The cooperation between the Marines and KU has been inspiring, Pride said.

“How the U.S. military can actually get put with a college ... to be able to come together and accomplish something as big as this ... I’m pretty sure there has not been a Marine here (before) going through this whole thing with the athletic department of KU,” Pride said.

“To learn something different to take to the Military is so valuable ... I’ll never forget her (Hudy).”

Hudy said she has been inspired by Pride’s personal story.

He nearly lost his left arm in a roadside bombing in September of 2008 in Afghanistan.

Following 21⁄2 years of recovery and rehab, Pride was able to win silver and bronze medals in track at the inaugural Wounded Warrior games.

“Leadership,” Hudy said of what she’s been taught by Pride. “What he’s gone through ... he almost gave up his life for the good of our country. His team of Marines came in and saved his life (when a vehicle crushed his left arm). The stories he’s shared with our men and women athletes have been very impactful regarding what they are to do — either lead, follow or get out of the way.

“On a much smaller, more insignificant scale, the core values and leadership guidelines are the same whether in sports or the Marines. There’s just a greater significance in what the Marines do,” she added. “They are sacrificing their lives for our country. We go for wins and losses and entertainment.”

Pride, who actually grew up a Missouri fan who also roots for KU, said he has been quite impressed with KU’s men’s basketball players — athletes he has met as part of this program made possible because of a research grant to KU’s Health, Sports and Exercise Department to work with the Marines.

“They are loaded with future NBA players. For them to reach out like they have has been impressive to me. They treat me like family,” he said.

“I would like to thank Kansas University for opening its doors to me and giving me something to give back to the Marines and just to say hoorah to those Marines out there that will see this story,” Pride said.

you never know... she actually could be but we just dont know~

I thought the same thing - not once, but twice! I sure hope that the LJW didn't take any liberties with a quote attributed to a US Marine (but I'm guessing those references should be in parenthesis).

Andrea Hudy ~ one more reason I am proud to be a Jayhawk. Well done, Coach Hudy

Coach Hudy = The Heartbeat of Excellence Thank you for representing Kansas with such class! Great article.

Pay her plenty so she stays put!

Good work. Any chance we can see an article about Jayhawks in the summer league?

Kudos to you, Gary Bedore, for saying he was "awarded" those medals. That is correct. Too often I see authors saying someone "won" the Medal of Honor or another medal. One does not "win" a medal. It is awarded for performance. It's not a contest. Obviously this is a pet peeve of mine. Thanks for stating it correctly.

Pride. What an appropriate name. I'm proud of you, Sgt. Pride, the Wounded Warriors, Coach Hudy, my Jayhawks, and all those serving in the Armed Forces.

I also recommend that everyone consider contributing to the Wounded Warriors at www.WoundedWarriorProject.org. Another contribution to be considered is the USO, at www.uso.org.

Thanks to all who are and have served our country.

I'm glad we're working with the Marines and the Wounded Warrior Project. The only thing that would have made it better is if we'd done it on our own, instead of because we had a grant to do it. At least someone had enough interest to apply for the grant. Well done.

Oorah and semper fi Sgt Pride! I imagine your time with KU athletics and Andrea Hudy will provide extra motivation for you and the other devil dogs in Ft Leonard Wood. YAT-YAS

Well done KU for allowing this. I know it will benefit both sides.

same story but a little bit different in the details

I'm as proud of Coach Hudy as any of the players. She is one of the things that make KU special.

Oorah is the battle cry of the United States Marine Corps. It is equivalent to hooah in the US Army and hooyah in the US Navy and US Coast Guard.

Andrea is indeed an integral part of our basketball success over the past several years. How she's transformed a number of our athletes is nothing short of amazing. I had the distinct privilege of meeting her a few years ago and she's not only a tireless worker, but also a terrific young lady. We're fortunate to have her.

Coach Hudy is the (wo)man!

"The cooperation between the Marines and KU has been inspiring, Pride said."

A big thank you to all that made this happen. KU, Coach Hudy, etc., Inspiration to all Sgt. Pride, carry on Marine! Oorah!

Hudy became famous when the world saw what she did to Thomas Robinson. Think of all the games that came down to the wire where the other team was exhausted while Bill's 8 man rotation piled up the minutes. Take a look at this years Perry Ellis. He looks more like Selden than last year's model. She also makes them quicker. Brady gave her praise for making him a better lateral defender.

Even though Randle went to Kentucky, during recruitment, he tweeted that he could easily see himself being "Hudyized".

After a Big Monday game with Texas when she was shown on the bench as the National trainer of the year, there were several games where that scenario was repeated for the rest of the nation to see. The article says that Self always uses her in recruiting.
She is another special Jayhawk. Here is a better picture. 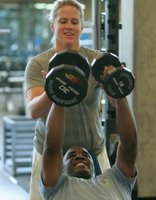