The 7-footer from San Diego had to sit out Friday’s opener against the New York Knicks because not all the players involved in a recent three-team trade that sent Withey from Portland to New Orleans have taken physicals and been cleared to play.

Withey will not be allowed to practice or play in games until all the players in the deal have been given the OK by medical personnel.

“You can see it in his eyes: He’s ready to go,” Pelicans’ summer league coach Bryan Gates told the Baton Rouge Advocate. “He sits down sometimes, then he stands up, and he walks around. He walks over there. Then he comes over and sits down, gets a drink of water that he doesn’t need, and then he sits down. Then he just kind of keeps walking around. From a coaching standpoint, we’ve got a young big. It’s going to be fun.”

The Pelicans will meet Milwaukee on Sunday night.

“It’s probably going to be pretty rough for me,” Withey told the Advocate. “I’m not in game shape. I haven’t been in practices or anything like that. Watching plays and trying to get them stuck in your head is a lot different than going out and actually having defense on you trying to do it. But if I am able to play, I’ll just go out there and play defense and do what I can do.” 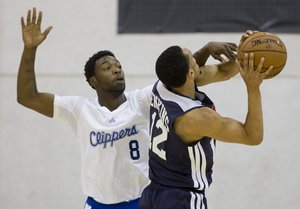 Elijah’s pro debut: Former KU combo guard Elijah Johnson scored five points off 2-of-6 shooting with two turnovers and one assist in the Los Angeles Clippers’ 90-83 victory over Atlanta on Friday in Vegas. Johnson also had two rebounds while playing 16 minutes in his pro debut. ... Former KU guard Josh Selby did not score while playing 14 minutes in the Los Angeles Lakers’ 70-62 loss to Cleveland. He had four steals, three assists and two turnovers in 14 minutes.

“I went out on the Strip yesterday to get some food. It’s pretty hot,” McLemore told nba.com of the scalding desert temperatures. “It’s nice. It’s been awhile since I’ve been in Vegas. It’s been five years. I’m definitely going to enjoy my time here with my team.”

Of his first NBA practices, McLemore said: “I’m having fun and learning a lot of new stuff. I think we’re ready and prepared for the first game.

“I want to work on my all-around game — the defensive end first,” he said. “Coach (Mike) Malone stressed it the first day we got here. It was the main thing we did at Kansas, the main thing coach (Bill Self) stressed. I think I can bring a lot to the table.”

I could hardly stand to watch E.J. today...he missed some bunnies and had couple of really poor T.O.'s... hopin' he'll bounce back... You'd think in his hometown... IDK.

What did you think was going to happen? He was going to be better against better competition? He is what he is.

Very true Robbk. I wish nothing but the best for EJ. RCJH!

I still don't know what EJ is...the #4 rated PG of his class or a 2 guard where he had his best play?

EJ, unfortunately for him, was asked to perform different roles as were needed by the team and never really showed his true potential imho. I hope someone picks him up (doesn't need to be the NBA) and helps him develop his game.

I was always waiting for EJ to have a breakout season and it never quite happened although his junior year was his best. I have nothing but good hopes for EJ.

For anyone that has watched EJ, does he finally look healthy? Does he have his pop back?

Also.. LJW reported that Releford was supposed to play for Indiana's Summer League team...he's not on the SL roster...did I miss something??

He was cut from Indiana but is now on Denver...

I taped the Friday Summer league games to watch later,so I could watch Selby and EJ play. I had almost forgotten, why at times. I hate listening to the NBA announcers, Steve Kerr and Reggie Miller together,during the game. Thank's guys for reminding me why yesterday. Those two are brutal, as a tandem,it's like watching a talk show, because all they do is talk about everything,but the teams playing or the players playing in the game. Okay enough of my mini rant about those two announcers tonight,but does anyone else feel the same?

I will sneak a peek at an NBA game once in a blue moon, but only if a Jayhawk is playing.

I abhor the NBA. To me, it's like "professional" wrestling; they're making a spectacle out of what should be a sport.

P.T. Barnum would have LOVED the NBA.

Fully agree nuleaf, although I think P.T Barnum wouldn't watch it either. On a side note, saw a report saying that the NFL only has 11 min of action per hour! I can watch it recorded much easier than live.

NFL Rewind on the NFL's site is great for watching games. You can't watch them until the Sunday night game is over but they have this play mode that cuts out all the btw play bits and even some insignificant plays to make all the games 30 minutes.

Amen to that, nuleaf. The spectacle known as the NBA holds no fascination for me.

Does anyone know which two teams the NBA powers picked to play in the next finals? Now that the Nets have Pierce and Garnett, I bet the Heat take the dive in the semis in the East. But I have no idea about the west. If it was Vince McMahon running the NBA, it would be the Clippers. The young guys (Thunder) had their shot two years ago. The veteran then came back to fall short. Now it is time for another young one.

I wish our pro journos would interview some retired pros like Scott Pollard, etc., and ask which level of hoops is actually more fun to play out on the floor--college or pro--and why?

Do you think Pollard remembers playing at both levels?

Good question and one Scott could provide an answer for no doubt.

FWIW, I have a hunch Scott's rep is partly contrived on his part. He seems pretty bright to me, when he is not clowning. A good sense of humor and intelligence often go together like earth and outerspace. :-)

it would definitely make for some interesting reading!

You could ask Scott about anything and get interesting reading. Just fun.

I just want to point out that Josh Selby had three assists, not one, two of which were quite nice. You can see one in the highlights of the game starting at 0:54. He also made a three pointer that didn't count because an offensive foul was called on someone else. Not to suggest he is going to make the team, but he actually looked solid despite not scoring. http://www.nba.com/video/games/lakers/2013/07/12/20130712-sl-cle-lal-recap.nba

Nicely done by Josh. This kid wasn't a top recruit for lack of skills. I still believe that he could have been a lottery pick if he had stayed at Kansas another year.

His freshman season was handicapped from day one. Expectations were not realistic considering the situation. Having his first game be one of his best games didn't help and neither did the consistent if not flashy play of Reed or Morningstar If Selby could have stuck around as did McLemore - yes, different situation - I think he would have been a super sophomore.

Thanks for the link!

I've lived in the New Orleans area since 1999 and I've only been to one NBA game. The combination of loud rap music and the NBA "dribble-pass-shoot" mode of play just didn't do anything for me. WWE with a ball.

And besides, dining out is just to much of a treat.

But remember, avoid anyone named Guy Bannister, or Lee, um, now what was his name?? :-)

What's up with the "answer the questions" bit? Annoying at the least.

I don't understand all the NBA hate on these boards... maybe it's a generational thing, but I grew up watching the NBA in it's heyday (Magic, Bird, The Bad Boys, and Jordan, et. Al.) and watching the playoffs brings me back to sitting outside on my grandparent's back porch with Grandpa watching games late into the night.

I really love KU basketball but the skill and execution of the NBA is just so much better and seeing two team duke it out in a seven game series is for my money, as good a way to determine a champion as there is... No fluke one game surprises that KU has suffered from so much over the years.