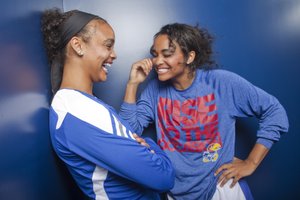 After a few weeks on campus, Dylan Gonzalez already has been stopped by strangers at Allen Fieldhouse who have called her by her first name.

Others have said how big of fans they are of her and her twin sister Dakota — and neither has played a minute for Kansas University’s women’s basketball team.

Though No. 1 men’s basketball recruit Andrew Wiggins has received most of the headlines this summer, it’s possible that a pair of outgoing twins from Pocatello, Idaho, could end up bringing nearly as much publicity to KU.

The 6-foot Gonzalez sisters — thanks to social media — have stepped onto KU’s campus as mini-celebrities.

Need proof? The Big Lead sports blog declared in April the twins might be “the next big thing in college basketball” and later posted a story in May with the rumor that one of the twins was dating former No. 1 overall pick Anthony Davis (“We’re just really good friends,” Dakota said). The two also regularly interact over social media with rappers Romeo Miller (Lil’ Romeo), Trey Songz and Waka Flocka Flame and have been compared to former Notre Dame guard Skylar Diggins.

Dylan and Dakota — they both model as well — have more than 200,000 followers on the photo social media site Instagram (Dylan is just 25,000 behind first lady Michelle Obama), while their combined Twitter account has more than 20,000 followers (for comparison, KU men’s basketball freshman Wayne Selden has 15,000).

After a few weeks on campus, KU coach Bonnie Henrickson says the twins already are at a level of recognizability that it took All-Big 12 point guard Angel Goodrich five years to reach.

“I’ve always said it since I got into this profession: We’re in the entertainment business,” Henrickson said. “If that’s part of it, I think that can only help us.”

The twins have marketed themselves well. The charismatic pair regularly post on social media — using Instagram, Vine and Twitter — and aren’t shy about putting themselves in the public eye. That includes posting photos, singing duets on camera and answering questions from fans in videos on YouTube.

“We were born into this age,” Dylan said. “Social media is the thing to do.”

Part of the attention, the women know, has come from their looks. Both have heard the term “eye candy” used by followers online.

“We appreciate it. People don’t have to compliment you, so it’s like, ‘Thank you. Thank you,’” Dakota said. “But at the same time, with the support, we do hope it comes to where it’s supporting the team for what we worked so hard for and what we want.”

Added Dylan: “For now, that’s OK. Later, after we get going here, like Dakota said, our team has so much potential.”

As do the twins themselves.

The two are the daughters of former KU standout Angie Snider, who led the Big Eight in scoring in 1984 (21 points per game) and still ranks 11th on the Jayhawks’ all-time scoring list.

Though the twins spent most of their lives in Denver before moving to Idaho about six years ago, Angie made sure they knew about KU. When coming back to Kansas to visit family, Angie would take her daughters to KU’s practice or have them watch the Jayhawks during the Big 12 Tournament in Kansas City, Mo.

Though both believed early in their high-school careers that they would attend Pac-12 schools, they ultimately picked KU after seeing the scoreboard videos and the team camaraderie at Late Night.

Dakota was ranked the 43rd-best guard in the class of 2013 by ESPN’s HoopGurlz, while Dylan was 44th.

So far, Henrickson said both have been impressive. Not only are they quick learners, but they also have been good teammates.

One example came when Henrickson was giving the two special instructions this summer on one side of the practice gym. Every time point guard Natalie Knight circled the perimeter on a jog, one of the twins would slap hands with her or yell encouragement.

It was one of the first times Knight had been able to run since tearing her ACL in January.

“I didn’t tell them to do it,” Henrickson said. “They’re naturally good communicators.”

The two, who will both play on the wing at KU, also have been good listeners. Henrickson has already seen both improve their footwork and has received reports from strength coach Andrea Hudy that the two have tried to outdo each other in the weight room.

“They’re both incredibly competitive. They’re both very driven,” Henrickson said. “In the (few) weeks they’ve been here, they’ve both gotten a lot better.”

Now, the question is where they go from here.

With women’s basketball’s marketable “Big Three” — Baylor’s Brittney Griner, Delaware’s Elena Delle Donne and Notre Dame’s Diggins —all graduating to the WNBA, the opportunity is there for players like the Gonzalez twins to take their own place in the national spotlight.

They both know their social-media attention won’t amount to much, though, if they don’t play well and KU doesn’t win.

“If you’re going to be a losing team, my mom said, then people are going to be like, ‘OK, they’re surface, but not substance there,’” Dylan said. “For us, I feel like even if we lose a game, I feel like I’m very confident in my team and what we can do here that we’ll just bounce back from that, and people will see that. I feel like that will attract people.”

Henrickson knows the twins hold huge potential for the program in terms of exposure.

The 10th-year coach Henrickson, who uses Twitter and Vine for recruiting, is aware that many recruits could be following the twins’ social-media accounts online.

“If this brings attention to our program, whatever they’ve been able to do from a social-media standpoint — and I think they’re sincere, and that’s a part of why they’re doing this, to bring attention to the program — who wouldn’t want more attention to your program?” Henrickson said. “And they’re two quality young ladies who are very good players, who are very good people, who have great values and really are interested in helping us grow.”

Henrickson, who has led KU to consecutive Sweet 16 appearances in the last two seasons, also has seen the benefits other schools have received when their players have earned celebrity status.

“When it was Skylar Diggins … she played at Notre Dame,” Henrickson said. “There was a tag to her. It’s where she was and what she did.”

The twins already have set high standards for themselves and are unafraid to dream a little. Both have goals of Sweet 16s and even Big 12 championships at KU.

“We know what we want to do with our life,” Dakota said, “and our life goal is not to accomplish 500,000 Twitter followers.”

Can't wait to see these two young ladies play a little ball in AFH. This could change the face of women's basketball in Kansas, wouldn't that be great. Good luck to the Gonzalez twins, good luck to the Lady Jayhawks, let's win both Big 12 championships this coming season.

KU sports is on the rise; maybe that statement is a little premature, we have yet to see what the football team is going to do but...

"...my mom said, then people are going to be like, ‘OK, they’re surface, but not substance there,’”

What a wise and relevant thought for the times in which we live.

Finally.... I've heard one petty argument after another with regard to this Google advert. campaign... But if LJW is shooting down opinions, without justification of blatant vulgarity or violation of terms of use, it is tantamount to violation of freedom of speech... or should I say, in these times, freedoom of speech...copyrighted quote, by me.

Apparently, the same with Safari. I have no idea what you're talking about with the "Google Surveys". I've never seen one.

Thanks for that. I use mostly Chrome and sometimes Firefox. I'm off to install Ghostery.

What would you do if you had a million dollars?

2 chicks at the same time

What makes you think I don't.

Don't know if you're kidding or not, but vine allows for short (3-4 second or so) videos to be quickly and easily posted. The ones I've seen loop so you see something over and over again. Think of it like twitter for videos.

I also use Safari with iPad. I have no idea what all the hubbub is about this google crap, and I'm feeling OK about that.

They remove a lot of comments when you speak I'll of the Google ads, so don't feel like you are getting the full complaints.

you only have to answer one question to get into the article. Doesn't seem that much of an inconvenience to me. Different strokes ....

Not that I like Google surveys (in fact, they're terrible for user experience), but they monetize really well. And if you haven't heard, the newspaper business is struggling to find ways to give you quality digital content without you paying for it. So, unless you want this site to be like Rivals.com and live behind a pay wall or something, I'd say just suck it up. Sure, let LJW know that the surveys are bad, but understand the reality the good content has got to be paid for somehow.

Struggling businesses that warren buffet and Charles Koch are both investing in. It'll be interesting to see when businessmen own these businesses if they will turn them around or if it truly is a dying business.

ESPN will soon be requiring all comments be via Facebook.

So saying the ljw has a first amendment right and saying the Google ads are bad now gets your comments and the replies removed because it is against the terms of use?

I noticed when they announced the agreement, they didn't allow comments.

What about the women's basketball team? Saw a pictorial of the twins and they are truly hot and I would imagine a lot more guys will be attending the Lady Jayhawks games this year. Those lips are beautiful.

I live in Atlanta and now might extend a trip back to see the boys games to catch a girls games, dayum.

Bonnie says she's in the business of entertaining us? That explains a lot because I was always under the impression that she was at KU to win games. Winning games is entertaining and she has consistently underachieved in yhe regular season and needed a couple of big upsets in the tournament to keep her job.

Has kusports ever told us what they get out of having the Google survey inserted in the articles? Maybe if I understood that it's worthwhile, maybe then I'd not have a problem with it.

There is an article about it on the left side; hover, they don't let you comment on that article. Maybe if they allowed it there you wouldn't get it here.

I believe they get paid. Which means it continues to be free for us. Besides, it's just one question on your first article of the day and then you're set for 24 hours.

Personally I don't have a issue with it. I push a couple buttons and get the article. A 5 seconds passed in my life. Big freaking deal. What is a big deal and we all should be more worried about is KU Athletics taking basketball games away from Kansas residents giving the power to cable to dictate who is worthy to watch the games merely on the provider they have. That that is something to be pissed about.

What a pickup! It will be fun watching these ladies during their careers on the Hill.

Notice that the privacy link that gives you the click here to opt out doesn't work. Go figure.

Thank you Bonnie, for being who and how you are.