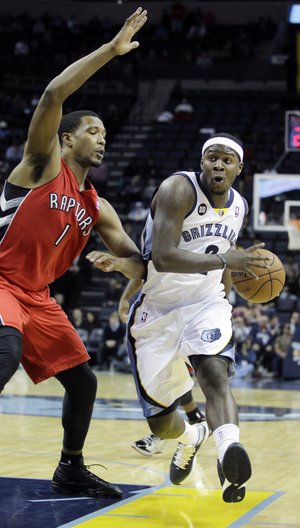 In this Nov. 28, 2012, file photo, Memphis Grizzlies guard Josh Selby (2) works the ball against Toronto Raptors forward Dominic McGuire (1) during the second half of an NBA basketball game in Memphis, Tenn. The Grizzlies have agreed to trade Selby, Marreese Speights, Wayne Ellington, and a future first-round draft pick to the Cleveland Cavaliers for Jon Leuer on Tuesday, Jan. 22, 2013.

The trade Tuesday is the first big move by the Grizzlies' new ownership and clears about $6 million in salary in getting Memphis under the luxury tax threshold this season. The Grizzlies rank fourth in the West and are 6-4 over their past 10 games after the NBA's best start this season.

The deal gives the lottery-bound Cavs another first-round pick to improve a team entering Tuesday night's home game against Boston with a 10-32 record — second-worst in the Eastern Conference. Speights also will help replace center Anderson Varejao who will miss the remainder of the season after developing a blood clot in his right lung.

The ownership group led by Robert Pera took over the Grizzlies on Nov. 5, and they had been scheduled to pay about $4 million in luxury tax this season with a payroll more than $74 million. This should help Memphis keep its starters Rudy Gay, Zach Randolph, Marc Gasol, Mike Conley and Tony Allen together the rest of this season for another postseason run.

"It's a trade that had to be made from a business decision, so we have a chance to keep our core together and we move forward," Memphis coach Lionel Hollins said. "Hate to lose Mo and Wayne or Josh, but it's part of the business of basketball and you have to do things. You have to make some tough decisions, and tough decisions were made and we live with them and move forward."

Speights is earning $4.2 million this season, while Ellington's salary is $2 million. The Grizzlies also get a $6.4 million trade exception good for a year to help sign a free agent or use in a trade.

The 6-foot-10 Speights, whose contract expires next season, will help ease the loss of Varejao, who was leading the NBA in rebounding. Speights averaged 6.6 points and 4.7 rebounds as one of the Grizzlies' top reserves but had been averaging only 14.5 minutes this season coming off the bench in Memphis. The return of forward Darrell Arthur from an early-season injury diminished Speights' minutes even further. Arthur, in his fourth year out of Kansas, has averaged 7.9 points and 3.9 rebounds in 20.4 minutes in 12 games this month.

"Marreese will strengthen our front court, while Wayne and Josh will add depth to our back court," Cleveland general manager Chris Grant said in a statement. "At the same time, we are adding a valuable asset with another future first round pick, while also maintaining our future flexibility."

The Cavaliers also waived Jeremy Pargo to create room for the trade.

Selby had played in just 10 of the Grizzlies' games this season, averaging 2.2 points in 5.9 minutes during mop-up time. The second-year pro from KU averaged 22.0 points, 7.0 assists and 6.5 rebounds in 34.0 minutes when he was assigned to the D-League for two games in late December.