Opinion: Jayhawks will need to turn up juice against Baylor

Kansas guard Elijah Johnson (15) and the bench celebrate a bucket by the Jayhawks against Texas Tech during the first half on Saturday, Jan. 12, 2013 at United Spirit Arena in Lubbock, Texas. 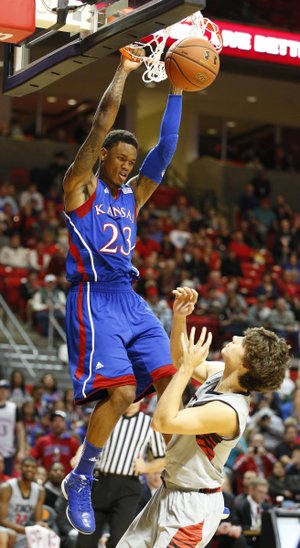 Lubbock, Texas — Lunatics who trust comparative scores in attempting to forecast outcomes will note that Baylor and Kansas, the Big 12 powers who meet for the first time this season Monday night in Allen Fieldhouse, both played Texas Tech in United Spirit Arena this past week with distinctly different results.

Kansas stretched a two-point halftime lead into a 60-46 victory Saturday against the Red Raiders, four days after visiting Baylor scored an 82-48 slaughter.

Is it a mistake to read anything into the outcomes?

“Most definitely,” Tech interim head coach Chris Walker said. “I wouldn’t even comment who is the better team.”

But when Walker talked about his two most recent foes it sounded as if he likes KU’s chances of staying unbeaten in the Big 12.

“First of all, it’s in Lawrence, I believe, and that is something in and of itself,” Walker said. “And Kansas has guys who played in the championship game. They have four seniors and a guy predicted to be a lottery pick, and Baylor has pros on its end too. So it’s going to be a heck of a game with a lot of future NBA players on the floor.”

A heck of a game Saturday’s was not, at least not for Kansas, which played as ugly a first half as it had in years. So much for the second-half field-goal drought of 9:18 against Iowa State disappearing in the rear-view mirror, as predicted here. The Jayhawks topped themselves for offensive futility Saturday by not scoring a single field goal in the final 11:13 of the first half, during which they made just five buckets from the field.

Tech had two more offensive rebounds in the first half than Kansas had defensive boards.

Kevin Young, the team’s energizer bunny, looked to be out of batteries and repeatedly abused on the boards in the first 20 minutes. KU coach Bill Self’s tongue gave him new batteries at the half, and the senior forward led the way from there.

So why believe that a team in such a sluggish state for 20 minutes against a Red Raiders squad picked for ninth in the 10-team Big 12 will gather itself in time to stop a talented Baylor team hitting stride just two days later? For one thing, it happens all the time in college basketball. It happened during halftime Saturday. For another, Kansas will go from playing 20 minutes in a fog to 40 minutes in the Phog.

The obvious home-court advantage cited by Walker ranks as the biggest but far from the only reason to like Kansas extending to 31 an Allen Fieldhouse winning streak seriously challenged the past two games. Even when its offense drops into a prolonged funk, the defensive intensity doesn’t fall as far with it. Plus, the veteran Jayhawks won’t let the Bears’ flapping jaws erode their composure. The Red Raiders were tagged with two technical fouls in the loss to Baylor, and both could be traced to Baylor players egging them into retaliating to trash talking.

Self won’t have much time to dissect what went wrong in Saturday’s lackluster victory.

“I want them to forget about it,” Self said. “There are things we may learn from them and show them five minutes of edit clips or whatever. But we need to put our focus on Baylor."

As he made his final post-game comment, Self sounded tired. And he sounded tired of talking about a game that for a long stretch looked as if his players were shooting at upside-down peach baskets.

“I don’t know how you guys feel, but we look like a tired team,” he said. “So we need to get our batteries recharged. I’m sure we will for Monday night. We’re playing a really talented team.”

Consequently, it will take as much passion as talent to beat the Bears. The former didn’t show up until the second half Saturday, a formula that won’t cut it Monday.

Classic case of looking at ahead to Monday Night...it happens.

Looks as if they were looking ahead all of last week!

I get the story; however, when did Baylor become one of the "Big 12 powers"?

Let's see, 3 tournament appearances in the last 20 years, no better than a #3 seed in the Big 12 tournament. They may be projected to be good by the media, but they have never lived up to the hype.

KU is 16-3 against Baylor inside the Big XII. (18-3 overall). All but K-State and Texas Tech have worst records against KU, while in the big XII.

2 Elite 8's in the last 3 years and beating UK in Rupp is way more than anything every other Big 12 team besides KU has done the last 5 years.

So two years in the past 20 years makes you one of the powers in the bigxii? They have been in the BigXII for 15 years and only have 3 tournament appearances in that timeline.
Let's see OU, OSU, and UT all three have final four appearances while in the Big XII, not Baylor. That aren't a BigXII power. They have been ranked as high as #7, let's see, KSU, OU, OSU, and UT have all been ranked higher than that.
Baylor has not been higher than a #3 seed in the NCAA tourney since being in the BigXII, I think all of the schools have been higher than that.

Lunatics who trust comparative scores in attempting to forecast outcomes

Lunatics who trust comparative scores in attempt to forecast outcomes

On the other hand, Mr. Keegan treated us with this:

is marcus smart going to get big 12 rookie of the year or will ben?

has wesley seen any time on the court this season?

He has been out with a broken finger.

He has played in 8 games.

OTOH, we have, "The Jayhawks topped themselves for offensive futility Saturday by not scoring a single field goal in the final 11:13 of the first half, during which they made just five buckets from the field."

That's extremely poor writing, as it makes it sound as if they didn't score a single field goal in the final 11:13, while at the same time making five buckets from the field during the final 11:13 of the first half.

We still owe Baylor for last years defeat in the Big 12 tournament. I just hope that their three point specialist isn't as hot as he was last time we played them.

I thought this "basketball mind" had the other nine teams conceding 1st place to Kansas?

Remember the Keegs article of one week ago with a headline and story that suggested KU just has to show up for their games while the rest of the pack play for second place. I called that story :silly" and was lambasted by a number of blogs. This is the league. It is a grinder. Teams from the conference aren't near as wowed at Allen as mid majors who come in used to playing in front of 2500 people. They play in Lawrence every year and they know exactly what to expect. On the road in the conference it is the ticket everyone wants when Kansas comes to town and the team has to read all the fawning over Jayhawks during the week in their own paper. Every league team is jacked to play us and beat us on their home court. Things came too easy early in the season with the big blow outs and the victory in Columbus, OH, against a team that now looks much less strong than envisioned. Ohio State might be the 6th or 7th best team in the Big 10. Is anybody listening to coach? This team has a long way to go to compete in March. There is no Blue Kool Aid to be found in the Jayhawk Nation because it has all been drunk up. By the way, has anyone else noted Stephen F. Austin's basketball team from the Southland Conference? They have now beat Tulsa, Oklahoma and ORU on their home courts, and two of the three weren't even close. You don't want to see those guys in your bracket in either the first or second rounds in the tournament. They play monster defense and are tough as nails. One of the most underrated teams in America right now.

Teams giving KU their best shot? Nothing new there. This team needs to get better to make a run in March? No different than any other year. KU looking lethargic while playing a lesser foe yet still managing to win? Same ol' same ol'. Ugly wins are the stuff of which conference championships are made. Honestly, I think some people have never watched Self's teams before. I have no idea if how this team will do in March...we will know more about that in the next couple of months. But right now, KU remains strong favorites to win another conference championship.

He's been playing like this the whole season. It's just that the competition has gotten better since Temple and EJ's flaws as the point guard has been more noticeable.

EJ has to "Attack" and find a way to get in the paint and create for others. He's too freaking passive. Unfortunately, he may not change. He's been a "Ball Mover" the whole season. He needs to roll his sleeves up and get a little dirty. He's playing too conservatively and "Too Pretty". I don't like "Pretty" from my Point Guards.

I can live with the missed shots, especially given that he seems to still be dealing with an injury.

What I have a really hard time understanding is the lazy passes. How can a senior, who's been through so much in his career, be making those types of passes on such a consistent basis??? That's the type of thing you expect from a freshman.

Elijah is slow and clumsy. I can see Pierre Jackson going off on us. Baylor may embarrass us on Monday.

Maybe so, but don't forget who is coachinbg Baylor...Rick Barnes junior!!!!

PS By the way thinbgs are going, beating Kensucky in Lexington may not be that big a deal this year!!!

PS By the way things are going, beating Kensucky in Lexington may not be such a big deal this year!!!!

They WILL play better.

How many times over the years have we all seen KU play to the level of their competition?

KU will win by double digits.

And BTW, when I refer to weak competition, I'm obviously just referring to the TT game, not the ISU and Temple games. But they played much worse against TT than they had in the previous two games.

It's not like Baylor didn't look bad against TCU as well. I anticipate Baylor, like most teams will bring their best to KU as they get to play the role as the underdog. This should be a great game to watch with all the talent on the field. I don't think it's great that KU played like crap agains but I do think it's an easier place to come into a game versus the emotional high we had off of ISU. KU should mop it up to a double digit win here.