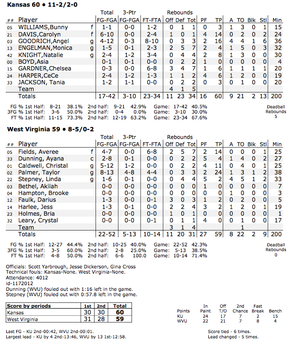 The Mountaineers’ Averee Fields tied the game 56-all with 57 seconds left on two free throws. Davis hit her layup on the ensuing possession, then teammate Natalie Knight hit a pair of free throws with five seconds left for a 60-56 lead.

Taylor Palmer made a three-pointer for WVU (8-5, 0-2) with one second left, but the Mountaineers still fell short.

Both teams traded baskets to open the second half, but then KU’s Bunny Williams fired in three-straight points to give the Jayhawks a 35-33 lead with 15:33 left in the game. KU took its largest lead, 39-35, but the Mountaineers countered with a 13-3 run, including six points from Averee Fields, to take a 48-42 edge.

KU responded with a 5-0 spurt and trailed, 48-47, with 4:27 on the clock. WVU’s Jess Harlee put the Mountaineers up 50-47, but KU’s CeCe Harper had a shot to tie the game with a traditional three-point play. Harper missed the free throw and Kansas still trailed, 50-49, with 3:08 left. WVU sank four free throws over the next minute of play, while KU’s Davis scored five-straight Jayhawk points to force a 54-54 tie at the 1:52 mark.

Goodrich drove to the basket and dished to Davis for the layup, as Kansas regained the lead, 58-56, with 42 seconds left.

“Just from the poise and composure (we showed tonight), we are in a great place moving forward,” KU coach Bonnie Henrickson said. “We got great production (from our bench) and I thought they played with a lot of confidence. This is a big road win in our league, because winning feels different. You prep different, you travel different and you feel better. Just the confidence you gain from being successful, that’s important.”

West Virginia took control early, 6-2, as Christal Caldwell scored all six of the Mountaineers points. Caldwell pushed the WVU lead to 10 points, 14-4, with a three-pointer at the 13:40 mark. WVU’s Taylor Palmer followed with her second trey of the game to cap the 11-0 run and take a 17-4 lead. KU’s Davis, who scored the Jayhawks first four points of the game, was forced to sit the final 13 minutes of the first half after being whistled for two quick personal fouls.

Trailing 19-6 and with Davis on the bench, the Kansas offense ended a nearly eight-minute drought between made field goals and responded with an 15-2 run, including six points by Goodrich, to force a 21-21 tie with 5:39 left in the half. Kansas ended the half without Goodrich and Knight as each collected two fouls with four minutes left in the period. The KU bench stepped up and finished the half strong, as the Jayhawks overcame its largest deficit of the season, 13 points, and trailed by one, 31-30, at the break.

Kansas will continue its road swing with a game at Oklahoma State at 7 p.m. Tuesday.

Congratulations on a big win. Road wins aren't that easy to come by, especially against quality teams. I have to agree with Coach Bonnie about the composure aspect being especially impressive and boding well. It should be pleasant dreams on the flight back home.

Last years NCAA tournament performance, this victory and the victory over the purple kitties are all great signs that womens basketball is turning the corner.

Gotta love this piece of quality journalism: "Neither team led by more than five after intermission." Followed 2 paragraphs later with "...but the Mountaineers countered with a 13-3 run, including six points from Averee Fields, to take a 48-42 edge."

"Gotta love this quality comment" Glad to know there are watchdogs out there who know what's REALLY IMPORTANT about a Kansas University sports article. KEEP UP THE GOOD WORK, Eagle Eye!!

Rumor has it the couches were burning right after the game ended.