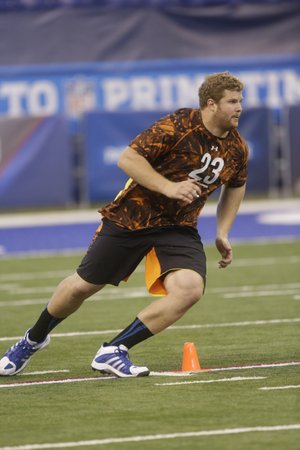 McDougald, a former wide receiver who switched to safety during the final two seasons of his KU career, finished near the top in several drills and, according to one veteran NFL scout interviewed by the Journal-World, helped his draft stock in the process.

“What he did, he kept himself in the mix,” the scout said of McDougald. “He helped himself. He did it all. He competed and those numbers are good, solid.”

McDougald’s 40-yard dash time of 4.74 seconds landed him in the middle of the pack among the safeties at this year’s combine, but the scout said for a guy with McDougald’s size — 6-foot, 215 pounds — that number was not too surprising.

“It’s adequate,” the scout said. “You can play with that speed.”

What’s more, McDougald’s 19 reps of 225 pounds in the bench press, which put him fifth among safeties at the combine, demonstrated what KU fans already knew — that McDougald’s game is more about power than speed.

As for the rest of his results, his 34.5-inch vertical jump landed him in the middle of the pack, his 122-inch broad jump placed eighth and his times in the three-cone (7.7 seconds) and 20-yard shuffle (4.44) agility tests were average, according to the scout.

“He’s a safety with some size,” the scout said. “So those are good numbers, and he’s put himself in a position where now we have to see how he plays.”

As for the 6-5, 298-pound Hawkinson, who participated in the timing portion of the combine with the rest of the offensive linemen on Saturday, the scout was most impressed by his mobility.

“That guy’s intriguing,” said the scout, who did not have either KU player on his list at the combine. “Sounds like you’re gonna get a big left tackle one day. I think it was a very good showing for KU football.”

Next up for both Jayhawks, should they choose to participate, is KU’s annual pro timing day on March 15, when a handful of NFL scouts come to Lawrence to test those players not invited to the combine in preparation for the NFL Draft, April 26-28.

McDougald should be able to improve his 40 time by the time the KU pro day rolls around. It is, however, a very deep safety class. He'll be fortunate to be taken on the last day of the draft.
Hawkinson might be a fit for a team like the Redskins who are looking for right tackle help and use smaller more athletic guys in their zone blocking scheme.

People throw around 40 times a lot but that really isn't a bad time for McDougald. Some no talent idiots will tell you they ran a 4.6 in high school or something but in reality only elite athletes are able to run times like that. Like the scout said, the kid is 215. He's not 190 lb corner who is expected to run 4.5

It's going to be hard to drop .05 seconds but if he does, he'll probably be drafted.

McDougald's 19 reps at 225 crazy. He will get drafted because he has size, strength and quickness. He doesn't need top level speed to be a highly effective safety. He will be great in run coverage situations and on blitzes, and will really only be asked to provide double coverage on the top receivers not to lock anyone down.

By the way, this no-talent idiot ran a 4.7 40 yd dash in high school. No-where near an elite athlete, but I had decent straight-line top speed when I was a little younger. I couldn't lift a brick and didn't have the leg strength to change direction. That's what makes the difference for an elite athlete.

There were 20 safeties who ran the 40 at the combine, and McDougald finished with the 18th fastest time. I too think the 40 is probably overvalued as an indicator of how good a football player he is, but a degree from Harvard Law School doesn't make you a good lawyer either, but it helps in the process of finding a job. To put it in perspective of just how competitive the whole combine is, there was a a 6-5 306 pound offensive lineman from Arkansas Pine Bluff, Terron Armstead, who ran a 4.72. Kenny Vaccaro from Texas, who is generally regarded as the top safety available, ran a "slow" 4.63. The fastest time from a safety was a guy from Syracuse, Sharmarko Thomas, who ran a 4.42. It's all right here: http://www.nfl.com/combine/tracker

Your actually wrong on the "no talent idiots part" because quite frankly you have to look at where they ran that time. 4.6 is really not all that fast without pads, it's the people who can do it with pads that are impressive. And people who said they ran that in high school probably did, heck when I was in high school we timed the 40 yard dash on the track because our practice field was garbage and the guys on the team like me who were track guys could easily obtain a 4.6 time as it is not at all elite as it translates into something like an 11 second 100 meter dash. So don't hate on people who said they ran a 4.6 in high school because they likely did or their coaches said they did in which case not their fault.

^^^ Here we go. 4.6 without pads is not that fast? It's blazing dude. Speed translating to "pads" isn't the same in the league. Half those guys wear nothing but shoulder pads and helmet. There is no tail/hip/thy/knee pads to slow them down.

Who was timing you in high school? Your coach I'm sure. These guys are timed with a lazer, bud. I'm not saying you definitely couldn't run a 4.6 but if you did, you were fast, real fast. You may have heard of a guy named Chad Johnson, he ran a 4.5 in his PRIME. Probably more like 4.7 his last 3 or 4 years!

Go find the average high school kid who says he's a 4.6 guy and Bradley McDougald would torch him, guaranteed.

Yeah I mean what would I know about fast? Only ran track in college and yeah a 4.6 translates into about an 11 second 100 meter dash....which trust me outside of junior high is snails pace so yes a 4.6 40 yard dash is not that fast.

At the major college and NFL levels, a 4.6 40 is average to below average for every positon except QB's and defensive and offensive linemen. For an average person a 4.6 is fast, but the players invited to the Combine are not average people. They are highly skilled athletes who have spent weeks training for the events at the Combine and learning proper techniques to get the best results possible. It's all about context kelleeman, and in the context of the NFL combine, a 4.6 is an average to below average time for most position groups.

Trojanhawk hit the nail square on the head. He deserves a refund from whoever trained him for the Combine.

Why does he need a refund? McDougald has never been the fastest player and was outrun numerous times by players who weren't considered speed demons the past couple of seasons and the stop watch just confirms that. McDougald will get a shot in the NFL as a special teams guy and S/LB hybrid to play run support defense.

McDougald was DEAD LAST in the agility shuttle, DEAD LAST in the 3-cone drill, 17th out of 20 in the vertical jump and 18 out of 20 in the 40 yard dash. If you're paying someone $800 a week to be trained specifically for those events I would think you'd feel ripped off when finishing in the BOTTOM 3 in nearly every drill except for one that it more pertinent for the OL than DBs.

The NFL wants special teams guy who are fast. McDougald was DEAD LAST in the agility shuttle and 3-cone drill according to the NFL website in addition to being the 3rd slowest player to run the 40. If you're paying someone $800 a week to train you for those drills I really dont think you'd be satisfied coming in DEAD LAST in a majority of them.

It's not like you can go to the store and buy a 4.4. 40. You have no idea what he ran before the trainer got a hold of him, because the NFL Combine's 40 times are notoriously accurate, and he's never been timed at the combine. Maybe he shaved .2 with his trainer. We don't know.

By the way he didn't come in dead last, in a very small group of colleges elite safety prospects. Besides he's a power guy. An instinct guy. His 40 time keeps him square in the mix.

I love how everyone has a comment. But I hope this helps. We have scouts saying McDougald improved his stock and we have Hawkinson who showed that he should be in the middle of all OL talks because of what he did. I say its great because why do HS players goto certain colleges because they produce professionals. So if we don't point out the weaknesses that our players have then maybe they start getting drafted higher and then we start winning and getting the 4 and 5 star players. We should show the love and passion that we have for those players and KU football will become that powerhouse that we all want. Great job players I say and way to represent yourselves and the University of Kansas. Rock Chalk Jayhawk!

Not sure players choose schools for their ability to produce pros. Some do for sure, but when you look at a large cross section, these guys are deciding with their parents and they have many things to consider. Pumping out NFL players doesn't hurt, but it's WAY more than that.

We are never going to be viewed as a fast lane to the NFL anyway. Even if we start winning a lot. The very top guys will always go with the hot, powerhouse programs. It would take us a decade or more and at least one national championship to get consistent looks from 5 star guys.