No point in whining about the one-and-done rule that teases college basketball audiences with loud talents such as Oklahoma State point guard Marcus Smart and Kansas shooting guard Ben McLemore, only to take them away to a league with quieter audiences and less passionate action on the stage. 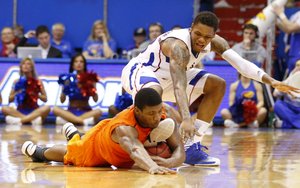 Oklahoma State guard Marcus Smart comes away with a steal from Kansas guard Ben McLemore late in the second half on Saturday, Feb. 2, 2013 at Allen Fieldhouse.

They’re good enough at their soon-to-be-professions to start earning big money, so why begrudge them that? The fact that tonight could be the last time they share a court as Big 12 players makes for an interesting subplot because they both are so gifted and feature such different styles.

If McLemore is Muhammad Ali minus the boastfulness, floating like a butterfly and stinging like a bee, Smart is Joe Frazier, a relentless, thickly built, in-your-face buzz saw, leading with his chin and never retreating.

Smart shoots a little too often at times, McLemore too seldom.

Smart’s Cowboys defeated Kansas in Allen Fieldhouse last month because Smart refused to let them lose. He celebrated with a stunning double backflip. McLemore drops jaws with his flashy dunks, but the closest he comes to celebrating is spontaneously flashing a grin.

They have turned the Big 12 Freshman of the Year award into a two-man race and are lead cars in the only slightly more crowded Big 12 Player of the Year derby.

For all their differences, McLemore and Smart have one thing in common: The more talented the competition, the more points they tend to score. McLemore scored 33 points against Iowa State, 30 vs. Kansas State, 23 against Oklahoma State and 22 at Ohio State. Smart stung chief rival Oklahoma with 28 points, had 25 at Kansas (plus eight second-half offensive rebounds), 25 vs. K-State, 23 against Gonzaga, 21 vs. Iowa State and 20 against North Carolina State.

The player whose team wins tonight will move into the lead for freshman honors and will join KU center Jeff Withey at the front of the pack for the top player hardware.

Regardless of what happens tonight, McLemore has the best shot among Big 12 players of becoming the top pick in the NBA draft. If he is, he’ll become the first shooting guard taken with the first overall pick since Notre Dame guard Austin Carr in 1971.

Plenty of time remains in their college careers before they need to worry about the future. Both college basketball superstars have one motivator tonight and it has nothing to do with individual honors. They and the rest of the players know that the winner remains in a first-place tie with Kansas State and the loser tumbles to third place, one game behind the co-leaders with five games left on the schedule.

Nice comparison. Got me ready for round two! Should be a good one.

Smart money is on McLemore.

I see what you did there.

Ben McLemore is one of the best ahooters I have ever seen and I think Jay Bilas is dead on in his comparison of McLemore to Ray Allen. I firmly believe that when Ben's NBA career is over, he will be residing in the same neighborhood as Allen and Reggie Miller in regards to all time great shooters. I know that's a very high bar to set, but I believe is going to be that caliber of player for whatever NBA franchise/s is lucky enough to get McLemore during his prime.

I don't know what an "ahooters" is, but it's one of the best words i've ever seen !

Now if he would just get to the rack a little more...

That's what typing at 1:30 at night does kiddos. At least the a and the s are next to each other on a keyboard so it's not the worst spelling mistake I've ever made and also why I'm not a spelling or grammar nazi on here.

Funny how often late nights and hooters go together...

Personally, I've never been a fan of "ahooters". I prefer a larger cup size.

Travis is shooting a much higher percentage from treyville.

Trav, you've still got bragging rights on the kid.

This sort of competition keeps a team loose and getting better.

It appears Ben is willing or allowed to take three-pointers under more defensive pressure than Travis. Travis usually takes a long time to wind up and let it fly. I think if he shot in the same situations as Ben, his 3FG would drop.

I used to think talent peaked with Durant and Rush, but this McLemore and Smart duo may be a new high.

A little early for the Durant barometer.

Self had landed Smart and McLemore?

Then he would have had Forte too !

Finally someone said it. I was wondering about that. I'm not a gymnist, but that was definitely a single back flip.

Smart is a great player. Reminds me of Sherron but has a little something more. McLemore will grow and get even better. That stroke is perfect. Such a natural.

tougher than Sherron but not as good of an outside shooter. Probably a little better - like Ru. Robinson in his prime defensively too though.

The only "something more" that Smart has on Sherron is 6 inches and 15 pounds. That gives him the rebounding edge. That's all. Sherron at his best had as much toughness as any player in America plus the fiestiness of always playing with a chip on his shoulder.

he'd be better than Derrick Rose before his injury.

maybe I should clarify "six extra inches would make Sherron... a much better defender"

The only things that kept Sherron from an NBA career were the abilities to be on time for a flight and to say no to food.

So First-Team All Big XII -

Who do you have in the other two spots.

Definitely Pierre Jackson and your first three. McGruder seems to get a lot of pub.

Technically Ben is not a 1 and done player. This is his second year at Kansas University.

glad he didn't pull an Enis Kanter and go none-and-done.

More than Smart and Ben, it is about limiting offensive rebounds, defending the three, and handling a very loud, highly energized crowd that is literally right on top of you. The only thing OSU fans want more than beating Self and KU, is convincing their boy to come home and be their next Mr. Iba. Never underestimate how wrapped in their DNA and in their fantasies this proud OSU bunch I live with down here is to get Coach BillI "back home where he belongs." They act like that hate him for choosing KU over his alma mater, but deep down they love and admire him. To them, Travis Ford is an interloper who fills the seat that belongs to Bill when he finally decides to come home.

That first sentence is the key to the game.

I'm not being negative, just expressing what I see - If ANYBODY on our team can make a 1-2 foot shot, we win by 20. I've never seen a team so adept at bouncing shots off the glass and rim without having it actually go in.

Young, Withey, Johnson, Ellis, and Traylor are the common culprits. And Releford is slowly becoming more and more inefficient at finishing layups.

He was an incredible finisher a few months ago.

And it isn't negativity. It's objective observation. Dudes are misfiring and launching the ball 5 feet off the top of the backboard.

Actually, I think Perry's been a LOT better on his FT's the past few gms.

One boring saturday a few weeks ago here in Baton Rouge I went to see Southern play 0-19 Grambling. Grambling was more adept at bouncing shots off the glass from 1-2 feet than KU! In fact, I've never seen a team shoot so many airballs from inside the lane as I did that day. So we may not be dead last in this category :)

Frank Martin claims that his team leads the nation in air-balled layups. http://www.usatoday.com/story/gameon/2013/02/15/frank-martin-south-carolina-gamecocks-press-conference-lsu-tigers/1921993/

We'll have to ask Jesse during the game tonight!

I see good players all over the country missing a lot of close-range shots. I think it is because the refs have let it get so rough (thank you Jay Bilas) that the big guys have to shoot strong assuming they are going to get fouled. When they don't get fouled, the shot ends up being too long or hard off the glass. I don't see this as just a KU shooting problem.

Smart got a lot of cheap points in Lawrence with offensive rebounds and put-backs. We need to be a lot tougher on the glass tonight.

However, it is what it is.

This year, especially, if Kansas wins or ties for the conference crown, they will have truly earned it the hard way. [ That damn loss to TCU may indeeed be the bump in the road that throws us off the highway to Number Nine ].

Still, I have to keep the faith and believe the Hawks can pull it out somehow!!

No point in whining -- UNLESS you are actually suggesting that the likes of Marcus Smart and Ben McLemore somehow approach the overall game of Rio Adams.

On a more serious note, it has appeared that HCBS recently began using Elijah Johnson, Naadir Tharp, and Rio all three at the same time for short stretches recently. A creative and --on the sporadic experimental basis upon which it had been tried- promising approach to the Hawks' ballhandling troubles.

I was wanting to see more of that --and more of Rio occasionally out there as the principal ballhandler. Now I just want him gone. I am quite certain I am not alone.

Immaturity is one thing. Narissism and unconcern about team on the scale that Rio is unconcerned about team is a cancer in the locker room.

Don't let the door hit you in the ass on your way out, Rio.

And down goes Frazier!

Ben is great but he is going to struggle in the NBA if he doesn't get a better handle on the ball. He struggles to to create a shot for himself do to his lack of ball handling skills. I don't think i've ever seen him finish with his left hand either. He would be much better of polishing those skills and sticking around a year or two longer. I guarantee he would make a much larger impact going into the NBA with a little fine tuning of that skillset.