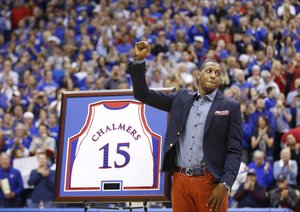 Images from Saturday night's game against Texas at Allen Fieldhouse.

Jamari Traylor, who had two points and four rebounds, played with his right thumb wrapped. He sprained his thumb at practice, KU coach Bill Self said.

“It definitely means something to me,” said Withey, who blocked Jonathan Holmes once in the first half and once in the second. “I put a lot of hard work into getting it. I have a lot more games to play. Hopefully I can put some distance on it and make sure it doesn’t get touched for 20 years or so.”

Ben McLemore flushed a 360-degree breakaway slam dunk in the second half.

“I thought he was going to do a windmill between the legs,” senior Kevin Young said with a smile.

Tyler Self hit a driving layup in the final moments. He was fouled and missed the free throw.

“That was a hard shot, but if he wouldn’t have gotten fouled it probably wouldn’t have had a chance to go in,” Bill Self said. “He was pretty happy afterwards. I will probably hear at home how he needs to probably start getting more playing time now,” Self added, smiling.

UT coach Rick Barnes joked that Bill Self was running up the score in having his son score such a spectacular bucket.

KU coach Bill Self answered questions from Jay Bilas, Rece Davis, Digger Phelps and Jalen Rose over the loudspeaker in the arena.

Self and former Michigan player Rose had a funny exchange.

“I listened to you earlier, Jalen. You said (if you were a coach) you would spend 70 percent of the time on offense and 30 percent on defense.”

“I know that,” Self said. “When I was at Oklahoma State we played you in the Sweet 16 and we tried to pick on you back then.”

“It was fun to play in that Oklahoma State game,” Rose fought back.

“That’s because you won,” Self stated, grinning.

Self added that in a perfect world, “You recruit guys who are hard to guard. If I had to pick one, I’d want offensive players and teach them how to guard.”

A highlight of GameDay was Withey and Travis Releford playing the game “Know Your Teammate,” in which they answered questions about the other player.

“We’re disappointed that he didn’t make it, obviously, North coach Gary Squires told the Wichita Eagle. “He has all the tools, all the skills, all the talent to make it.”

Frankamp, who scored a City League record 52 points in a game, has scored 40 or more points nine times, including five times this season.

“He is a great all-around player, plus he does a lot of things besides scoring, Squires told the Eagle. “He’s a playmaker, excellent passer, he can rebound.”

KU is tied with Oklahoma State and Kansas State for first in the league at 9-3. ... In the first half KU held UT scoreless from the field for 7:50, going on a 13-1 run ... Texas’ five first-half field goals were the fewest KU has allowed in a half this year and the fewest since Howard connected on five first-half field goals on Dec. 12, 2011. The last time a conference opponent had five or fewer field goals in a half was Texas Tech, who went 5-of-24 in the opening half Jan. 16, 2011. ...Texas’ three assists were the fewest by a conference opponent since the 1983-84 season and fewest in a regular-season game since Ohio’s three assists on Nov. 26, 2010.

Frankamp will have his day. Hope Randle was convinced.

Looking at the picture of Randle sitting with his mom I get the feeling his mom is extremely intelligent. Her conversations with Self very well could be the most important. What mother doesn't want the best for her child? She is likely just fine that Randle can't go NBA immediately after high school. Glad she is getting to know Self right now.

Congrats to Francamp! Amazing to break Perry's record only one year later. Too bad Micky D snubbed one of the nation's best.

-Traylor could be special by his Junior Year. It takes time to develop for a lot of these young men.

-Congrats to Royce Woolridge on scoring 36 points for Washington State, unfortunately in a loss yesterday. He seems to be coming along quite well in what would have been his junior year at KU.

-Kentucky losing by 30 yesterday certainly does not help their recruiting.

-I thought it was great seeing all that NBA talent behind our bench.

-When we play with intensity, we are a top 5 team.

-Where will KU be ranked on Monday? I am guessing around 8.

Kentucky has already recruited the Harrison Twins, James Young, Dakari Johnson, and Marcus Lee...and may reel in Wiggins or Randle. I don't feel too sorry for Calipari or the Wildcat fans.

Does anyone else think that UK has over-recruited??? I'm sure that they don't have as many OADs on their roster as they originally thought. I'm thinking Cal is going to have "discussions" with several players to "help" them decide what's best for their futures.

Lots and lots of egos to deal with. I wish him the best. May not be enough basketballs to go around?

Years from now, Conner F's jersey is retired after leading the Jayhawks to multiple NC's, shattering NCAA records along the way. During his speech into the HOF he'll share that it was his snub by Micky D's that fueled him. DUNK ON RONALD!!!

Conner, keep doing what your doing. Stay away from fast foods.

Withey has a long way to go! :) http://en.wikipedia.org/wiki/List_of_NCAA_Division_I_men%27s_basketball_career_blocks_leaders.

I had a good view of Frankamp during the game, and was very disappointed in his demeanor. I never saw him showing any emotion during the pre-game festivities, didn't applaud during the Jayhawk introductions or following Mario's speech. Just sat there like a bump on a log. He was that way every time I looked over at him during the game. I can understand Randle not being very demontrative, but Frankamp is a Kansas kid who supposedly has always dreamed of playing for KU. Maybe he is just shy and stoic by nature, but, at least in my opinion, appeared to be an aloof guy who was "too cool" to be seen enjoying himself with the commoners.

yukup - maybe you should get to know him before passing that kind of judgement...good grief.

and posting it in writing for all the world to realize your brilliance - or something like that.

The guy is a player, not some hack cheerleader. His work ethic has made him the best Wichita has seen in 30 years, he's all business and that's just fine.

Don't know about you....but I am a huge Jayhawk fan and I can't help but sit and do nothing at the games sometimes. Just taking it all in. And lets be honest man, when you're in high school, it's all about how you look. So Connor jumping up and down like a giddy school girl for his Hawks may not be the "coolest" thing to do in front of all those NBA guys and Julius Randle, an undecided recruit.

Can we please hold that other Texas school down there (can't remember the name) to not more than three field goals in the first half and make an old Jayhawk fan very happy?

Frankamp will have a great opportunity to prove McDonalds wrong. It's a very political team anyway. He had to have been close anyway, my guess is that the few games he missed being hurt cost him. So add him to a list of overlooked KU players that have proved them wrong lately: T Robinson, TT, McClemore, the Morris twins, Darnel Jackson, Sasha Kaun - all made it to the NBA and drafted ahead of many McD players.

This will give him a slight chip on his shoulder, and that's not a bad thing.

Ok, I know Kaun has been playing for millions in Europe, but the NBA is his whenever he wants it.

You misspelled Taylor. Man, Tyshawn hurts a finger every time he comes to Lawrence.

I'm very excited to see Frankamp in KU colors. He looks to me like the total gym rat, a blond Kirk Hinrich maybe, with a deadlier shot. I forget, is Frankamps dad a coach??

As far as McD's, I'm NOT lovin' it. As I recall, they didn't think much of Wayne Simien, either. I think it has to do with being a big fish in a little Kansas pond. All Wayne did during his first game was score a double/double in about twenty minutes against #23 Wake Forest.

Quote: "UT coach Rick Barnes joked that Bill Self was running up the score in having his son score such a spectacular bucket."

Wow Rick - joking around after getting blasted by 26pts?? Its stuff like this that make me realize more and more how lucky we are to have Self as a coach. Good luck in the NIT Texas!

I think youneed a winning record to get to the NIT...Texas doesn't have one!!!

I'm thinkin someone needs a little less coffee. Even Coach Self joked about the play. It that much more likely after getting blasted by 26. It helps distract from other painful realities.

With the season Texas is having, Barnes is just looking ahead for his own future. If Texas were to dump him in the near future. Two or 3 seasons like this 1 and Barnes might be out the door. Maybe he's thinking he can get hired like the rest of Self's assistant coaches. With his recruiting abilities, that could be a big plus.

Just joking (mostly, of course.). Don't take this too seriously. ;>?

I believe the Okie State, Iowa State and Baylor games will determine how far KU goes in March. If they can somehow win those games, they will officially be over the funk and will probably be a one or two seed.

Unfortunately, i think being upended by TCU effectively could end our consecutive conference crown streak. That bame would have given us the one game cushion way may need running the OSU,ISU,BU gauntlet!!

A win at OSU is vital. This coming Wednesday may show what this team has inside. Beat OSU, at OSU, and it could give KU a true sense of itsworth. If KU loses, it could work just the opposite, and the season could spiral down (Like the home loss to OSU, which put them in the funk that lost them the TCU game.), with no incentive (No 9th straight conference chamionship) to win at ISU, or even Baylor (which has been mostly inept this season despite their quality recruits.)

Unfortunately, Texas's "Dead head, no show" performance on Saturday didn't give the Jayhawks a good workout and could instill a confidence which the results of that game doesn't truly deserve. Yes, the Hawks played great defense, but it was against a vastly inferior team to what Barnes usually puts out. I predict the OSU game will be a dogfight. It's too bad the game wasn't played today. OSU had a dbl O/T game against OU and would have been tired, while KU had an fairly restful game against Texas.

RCJH, KU needs every Jayhawk to step up a notch this Wednesday!

KState and OSU still have tough games so hopefully one of those will have another loss. We need some help but we can still tie for the Big 12 title with a loss to one of the big 3 we have to play.