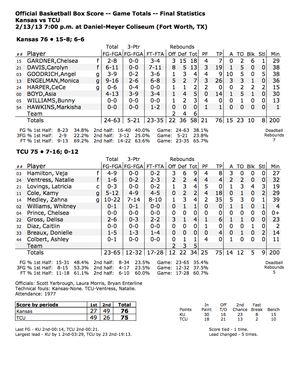 Kansas University women’s basketball coach Bonnie Henrickson was beaming after the Jayhawks’ wild, come-from-behind — historic, even — 76-75 victory over Texas Christian on Wednesday, but the feel-good vibe couldn’t completely overcome the dismay she felt at halftime.

Behind a career-best 26 points from senior Monica Engelman, including 18 in the second half, KU rallied from 22-point deficit at the half and a 23-point hole early in the second half at the Daniel-Meyer Coliseum.

“We were just terrible,” Henrickson said of the Jayhawks’ first half. “I don’t know I’ve seen us that bad in a long, long time. But like I told them in the locker room, I’ve never been so darn mad and so darn happy in an hour-and-45-minute swing. I couldn’t be more proud just to hang in and hang in.”

The 22-point halftime deficit overcome was the largest in school history. The previous high was 16 against Iowa State in 1988. 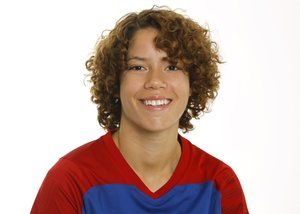 “We were incredibly proud of ourselves,” said Engelman, who hit nine of 16 field goals, two of six threes and six of eight free throws. “We realize we shouldn’t have put ourselves in that position, but when we got out of it, it was such a sense of relief, (that) we can do this. It was kind of a lesson learned.”

In the final three minutes, the lead changed five times, and twice in the final minute KU’s Carolyn Davis gave the Jayhawks a one-point lead on layup baskets. The final Davis bucket gave KU its 76-75 lead with 12.5 seconds on the clock.

Sophomore Chelsea Gardner grabbed a career-high 18 rebounds and added a career-high six blocked shots for the Jayhawks, while Davis posted her second-straight double-double and the 21st of her career with 19 points and 13 boards.

KU will host Oklahoma on Sunday for the annual “Jayhawks for a Cure” game. Tipoff is 1:30 p.m. at Allen Fieldhouse.

Really, this is the first Post comment? Well anyway, congratulations Jayhawks. One could argue, in this case, that it took a woman to do a man's job. Very well done taking care of TCU.

I had just about written this one off. Wow, what a comeback! Monica (18 in the second half), love you! I guess it would be bad form to question how we got down by 23 to a team which was winless in conference play. Nah, no sense in going there.

" I guess it would be bad form to question how we got down by 23 to a team which was winless in conference play. "

Great game by Monica, second half was incredible as i nearly lost hope. Knew this team could play better if and only if they are allowed to run in transition. Can't keep playing from behind, especially to an 0-12 team. This creates a log jam in the big 12 now. Gotta give them props for sticking with it and pulling out the win

She was way over due, and struggling badly all season, especially in crucial game situations as it is hard to keep her on the floor against better teams.

By the way, besides Monica's point production, others contributed mightily as well. Chelsea Gardner had 18 rebounds and 6 blocks!!! Carolyn Davis chipped in with another double-double, and Angel Goodrich had 10 assists, only one point shy of a double-double herself. Nice!

What an absolutely amazing comeback > Great effort Jayhawk women. It demonstrates just how much talent and will to win you all are capable of accomplishing, WELL DONE!!!!

FIRE HCBH! I am sorry people NOT impressed with a "W" by 1 point against the winless conference team! A team of 3 freshmen & 1 Sophomore as key players for the TCU team. True, the girls came back for the "W" but is this really a acceptable WIN besides going down in the Win colomn? This should never have been a contest between the two teams.

This win will look great on HCBH's resume after we finish tied for 6th and 7th in the conference again.

How many final fours, championship games, and championships has HCBH played in or won? In 8 years CH has made it to the sweet 16 once. Never finished higher than 5th in the conference. If you can't distinguish between HCBS and HCBH's resumes, then you better go ahead and get that lobotomy you've been considering. This ranks as the most ludicrous post I have ever read on here and there are many to choose from. She has 1 more year on her contract and unfortunately this will probably keep her here another year as we do not need to be paying of the contract of another fired coach. If Lew were here he would probably give her another bonus. Thanks again Lew. Maybe Lew can find her a new job.

So, should we "fire" Coach Self as well, after all, HE didn't get the "W" in Fort Worth.

Yes, definitely. Screw the National Title, Final Fours and 8 straight Big 12 titles. He lost to TCU, so get rid of him. Bonnie has not won anything at this point, so those who are sensitive to criticism of her need to get real.

I was just being sarcastic, no malice intended.

No we should fire you from ever posting again.

I was being facetious.

Well from reading your posts, it sounds like you pretty much have everything figured out. Maybe we should all stay away and just let you keep us enlightened.

“We were incredibly proud of ourselves,” said Engelman, “We realize we shouldn’t have put ourselves in that position, but when we got out of it, it was such a sense of relief, (that) we can do this. It was kind of a lesson learned.”

LESSON #2, A WIN WILL NOT HAPPEN LIKE THIS AGAINST A BETTER AND MORE EXPERIENCED TEAM.

I agree no_fan. Bonnie needs to go. She has done nothing since she has been here and was a poor hire from the start. Passing up the opportunity to hire Curt Budke instead of Bonnie was another one of Lew's big mistakes!

Yeah, no_fan it's really time for a change. The fans and the ladies really deserve a coach that will allow them to display their talents to their full potential while also not playing what it seems to be slight favoritism. Gotta get those other girls off the bench and allow them to start playing. A win against the last place team is no celebration victory, especially with such a young roster....Not to mention the PG was killing us (35 points).

Was there some curse that was left over from the men's game that wore off during the second half of the women's game? Thought that stuff only happened in Louisiana.

With the remaining schedule, two with Oklahoma, @ Iowa State totaling 3 losses and @Texas and home against TCU and TT[hopefully], 3 wins, the Ladyhawkes finish 9-9 in conference and 18-11 overall.

That probably sets us up for a first round tourney loss to Oklahaoma State who has beaten us twice already thus an 18-12 season. Unless our NCAA performance from last year carrries over to this year' season cache, it appears we will earn another trip to the WNIT.

No this is not good enough! This should not have been a game from the start and we allowed TCU to run away with the game early and we had no answer until late. A freshman scores 30 points in the first half (gotta be a big 12 record of some sort) and we did not make adjustmenst to stop her from getting off 3 pointers. Turnovers galore !!!!! There is no way that we will be able to get into the NCAA Tournament playing like this. This team is not a half court team and if they cannot push the ball, they will continue to struggle. Looks as if they were cut loose in the second half and allowed to run and that was the reason for the comeback.....Stop trying to run a million sets!!! Also with 9 players, it is about time to start playing the bench (Cole and Hawkins). There comes a time when you have to say a win is a win, and this was one of those nights.

I don't see 3 wins left. This team on the road is a complete mystery so I don't even think UT can be considered a gimme. I see finishing up 2-4 down the stretch and being the 7 seed in the Big 12 tournament with a first round match up against TCU and second round match up against either OU or ISU which would put them at 18-13 and likely on the outside looking in and Bonnie will be 1 for 9 (I think this is her 9th year) making the tournament and that is definitely grounds for dismissal. If KU doesn't beat OU in AFH on Sunday, their chances of making the tournament will be very slim.