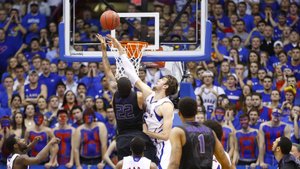 KU coach Bill Self talks after win over Kansas State

Withey set the record at the 16:28 mark of the first half by rejecting a Thomas Gipson shot in the paint.

“It feels good. I’m not satisfied obviously,” Withey said. “I want to break the conference record, too. It’s cool, but I still have some work to do.”

He needs one block to tie Texas’ Chris Mihm (264 blocks) as the league’s all-time human eraser.

Withey scored 17 points. He had a vicious dunk on a play in which he nailed KSU’s Jordan Henriquez in the face with his left elbow.

“It felt great. Jamari (Traylor) gave me a perfect pass. I went up and dunked it,” Withey said. “It was awesome and gave us more momentum (61-43 lead).”

Unforgivable: Self on KU’s three-game losing streak, which is over.

“First of all, folks, losing three in a row ... I understand it’s not forgivable,” Self cracked. “It’s a terrible, terrible deal, but what we’re going through is what 99 percent of all teams in America go through. There’s only one percent that doesn’t have rough stretches during a season. We’ve been so spoiled here because for a long time we haven’t had these kind of stretches. I think it’s been 6 1/2 years since we lost two games in a row. We haven’t gone through that. It will put a focus on what can happen when we are not at that magic level to compete. A lot of that is toughness. A lot is sacrificing for the good of others. Having the right mindset, being a good teammate. This past 10 days, I think we have had the focus on who we saw in the mirror as opposed to everybody else.”

Assistants helped: Miffed after Saturday’s loss at Oklahoma, Self let his staff take care of the film session Sunday.

“I didn’t show 'em film of OU. I let my assistants show 'em film because I knew I’d probably blow a gasket,” Self said. “They coached them in the film session. I came in at the end and made a couple points. The whole mindset was, 'Let's get ready to beat K-State.'”

• Kansas State coach Bruce Weber brought his Wildcats to town on Sunday rather than on game day.

“It’s only an-hour-and-20-minute drive over to Lawrence,” Weber said on Monday’s Big 12 coaches teleconference. “Initially we thought of just coming over in the morning, but with all the hype for the game, we just felt we needed to get the guys away. Some of them expressed an interest in shooting in Allen Fieldhouse.

“We did a quick walk-through yesterday (Sunday in Manhattan) and ate dinner and came over to Lawrence, shot a little bit and got the guys’ focus on the task at hand, playing Kansas.”

KU also traveled to Manhattan the night before its game against the Wildcats on Jan. 22.

Father/son: Bill Self on the teleconference was asked by a reporter from Atlanta (site of the Final Four) on coaching his son, Tyler.

“I had no apprehensions at all. He may have had several but I had none at all,” the elder Self said. “Our situation is a little different than some because he’s coming in as a walk-on and not going to play a big role as far as playing time or anything like that. The biggest thing with him is he thinks he may want to coach, and I get a chance to be around him every day. It really is nice. It certainly made this year very enjoyable for me having him there every day.”

As far as whether Tyler calls him “dad” or “coach” ... “Unless I call on him, he doesn’t refer to me as either one. I think he’d probably still say, ‘dad,’ in most situations,” Self said.

Rally talk: Self was asked on the teleconference why a team with four senior starters hadn’t been able to “rally” the troops during a three-game losing streak.

“I’m not sure that’s a correct statement that we haven’t been able to rally,” Self said. “We didn’t rally one game. We didn’t rally in Fort Worth (in Wednesday’s loss to last-place TCU). We actually played pretty hard at OU (Saturday). We just got beat. We played a team that was good that day. They made shots. They certainly made more plays than we did. The guys are trying. We do have more seniors. Three of them have played a lot for us. We should be better in some ways than what we are without question. It’s not from a lack of anything. We’ve hit a rough stretch.

“We’ve become very bland in many ways from an intangible standpoint that the seniors do have to help us with. But all teams go through it every year. We just picked obviously a very inopportune time to go through it from a league race standpoint. It’ll challenge us. I think it’ll make us tougher.”

Adversity can help the team in March, Self said.

“If we haven’t gone through some crap we wouldn’t be tough enough to compete on the highest stage anyway or the biggest stage,” Self said. “We’ll spin this in a way we’ll get better because of it, but nobody likes going through it.”

Snug fit: Several Adidas schools will wear a short sleeve compression jersey at some point this season, including possibly Indiana, Louisville, UCLA, Kansas, Baylor. Marc Spears of Yahoo reported on Monday. One KU official said he had heard of no plans this season to use a second alternate jersey.

Congratulations Jeff! Keep it going! Set your sights on 300!

The last jersey experiment was a failure. Let's not do another.

I don't want to see KU in skin-tight jerseys, It just sounds tacky. The last game people said that the team looked they they had on practice unis, this would look like they were just wearing workout clothes for a weightlifting session. No thank you.

most of them will make the regular jerseys look like skin-tight compression jerseys.

I wonder why Self didn't put Tyler in for the final seconds last night?

He was up past his bedtime.

Saturday. Cause I'm gonna be there!

Jeff, I talked to some friends and family in Indiana. They said they could hear the leather slap clear over there. Great job man!!!

KU has uniforms that are as good or better than any school in the country. The last "experimental" uniforms were an absolute disgrace. Surely there are some contractual reservations the school can exercise to approve the experimental uniforms. I understand when the corporation puts up the money they expect product exposure. My question is how is it in anyones best interest to market an embarrassment of a uniform to get name recognition?

You're right. The only thing you could see on those uni's was the Adidas logo. The only players I could tell were on the court was the tall white kid and the kid with the fro.

If Adidas insists on displaying the skin-tight KU jersey, perhaps we can compromise by letting Samantha Ryan sit on the bench wearing one.

Actually, many of our cheerleaders would fill that out better than she could !

I'm amused by people's level of rage about uni's.

While in the abyss, I did not realize that Nerlens Noel took over the nation lead in blocks. Withey is currently sitting 3rd with 98 only 5 behind Noel.

Hoosierhawkfan: I am in a good mood, but I am going to respectfully ask...get a new avatar.

He got like 12 blocks in one game, half of which were fouls that were not called.

BigManU you are a tool man. I hope you are just kidding.

Tell Adidas thanks, but no thanks. Those stupid practice looking uni's were bad enough. We already have great looking uni's.

BigManU, did you design the logo? If you did copyright it, and your covered. If you think you used it first but someone else designed it, its like telling someone "hey I had these shoes first, take yours off now!" I have a had designs stolen, inventions stolen, there are actions you can take. So, is it your design? monk

Your avatar wears army boots. I am impressed with your handling of this. My avatar, or the one I borrowed is pretty dorky but you can have it.

I've got a different take on the alternate jerseys... I think we should "go with the flow" and give 'em a shot. The young 'ens seem to like the new looks and it can't hurt recruiting-wise. I still remember the uproar from fans when shorts suddenly got longer in the early 90's!

the toned out jerseys we wore at WVU were pretty sweet up close, but were awful for us TV watchers. But the skin-tight compression jerseys are going to be horrific.

Please not another alt. jersey. What's next capri shorts, puffy shirts, hats???? STOP the madness, for the love of St. Pete leave our team alone. Now if you want to provide something for the fans to wear, lets talk... but I ain't wearing no capri shorts. not that there is anything wrong with that, just saying.

'Unforgivable'?! I hope that is not what HCBS really meant. Losing some basketball games may be a reason to mope, or feel bad about, but that is about all. The term, 'forgiveness', seems to connote a more ethereal significance to KU Basketball. I suspect he was appealing to the more avid supporters, and doubt he would lose the perspective, as in the midst of the losing streak, the team had interaction with some disadvantaged kids, which is putting basketball in the perspective it is. It is a college sport.

I'll forgive the three losses if we win a national championship. If we win consecutive conference title #9 then it's still negotiable.

Not unforgiveable, for sure.

Pretty insightful take. M told Bond, "If I want sarcasm I'll get it from my children. I need to know if I can trust you." Maybe you are right in that context but the posts I read that may be construed as critical seem to be heart felt and entertaining. Self knows he is not at a football school where it's not that big a deal. I am whiny sometimes and if you are right about Self then I am okay with that and think it is actually pretty cool of him to call us out. May be too subtle for the rest of us.

Also, ZagsBlog reported that Wiggins has set tentative dates for Kentucky, North Carolina and... Kansas. Tentative date for KU visit is March 4th for the TexasTech game. His visit will be between Kentucky (Feb 27th vs. Miss St) and North Carolina (March 9th vs. Duke)

Get rid of adidas.

Those are the ugliest short sleeve jerseys ever.... I can only hope to god we dont wear those

Randle visit this Saturday vs. Texas. Hope someone makes a sign that includes the hash tag: #juliusmaximus

For Gameday this Saturday morning versus Texas, are only college kids allowed in at 9am or could an old guy (like me) with a youngster (with 2 tickets for the 8pm tip-off) get in, leave early and come back? From what I've seen with prior Gameday broadcasts, wherever they may be, they only fill half the stadium behind the ESPN guru's. I think that would be a great experience ...Gameday in the am,,.then leave for lunch on Mass.....nap at the famous Econo Lodge.....pizza at the Wheel around 6ish....then back to Allen before tip-off. Does it get any better than that????