TCU fans flood the floor of the Daniel-Meyer Coliseum after the Horned Frogs defeated the Jayhawks, 62-55, Wednesday at TCU in Fort Worth, Texas. 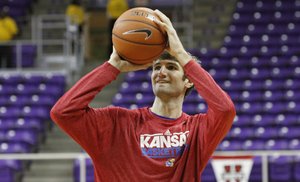 The Jayhawks played against the TCU Horned Frogs Wednesday, Jan. 6, 2013, in Fort Worth, Texas.

KU coach Bill Self talks after loss to TCU

There was a reason for that, he said.

“Trust me when I tell you, they might as well crown them now. Teams go through lulls.”

Johnson only took partial credit for his team’s first conference win as part of the Big 12.

“The only way you beat a great team, a well-coached team, a team with the kind of tradition they have (is for them) to not be at their best,” Johnson said. “Let’s not kid ourselves.”

Johnson finally let out a big exhale with seven seconds left and his team up eight points while at the free-throw line.

The 14th-year coach had seen too many crazy comebacks in his life to take it easy before that.

“Obviously, we’ve had tough years, and we’re having a tough year right now,” TCU senior Garlon Green said. “But this is a big win, and we need to carry this momentum.”

Johnson’s defensive plan was for his players not to let KU center Jeff Withey get position deep while also jamming KU guard Ben McLemore to take away his initial move.

The Jayhawks scored just two points in the game’s first 12:05, making one of 13 field goals with seven turnovers.

It was TCU’s first victory over a top-five opponent in 21 tries.

“We come out here every day, put our heart and soul into it every night, every morning,” Green said. “I’ve grown up, since being 3 years old, having a dream to beat Kansas or beat anybody. I’ve always believed in myself.”

At the end of his news conference, Johnson asked to be excused so he could try to get four hours of sleep instead of his customary three.

He was heading on a recruiting flight at 9 this morning, he said. And after that, TCU had seven conference games to go — including a Feb. 23 rematch against KU.

“We have to go to Lawrence,” Johnson said, “and that’s not going to be fun.”