Kansas guard Elijah Johnson elevates to throw a pass as Oklahoma State guard Phil Forte defends during the second half on Saturday, Feb. 2, 2013 at Allen Fieldhouse. 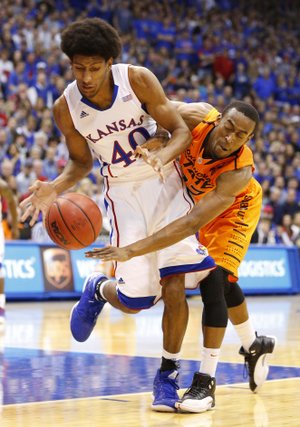 Images from Saturday's game against Oklahoma State at Allen Fieldhouse.

KU coach Bill Self talks after loss to Oklahoma State

Phil Forte, who played football at Kansas University from 1983 to ‘86, knows how difficult it is for an opposing basketball team to win in Allen Fieldhouse.

That’s why the former KU defensive lineman, who was known as one of the most quotable players during the Mike Gottfried-Bob Valesente eras, was momentarily at a loss for words Saturday when approached by a Journal-World reporter after Oklahoma State’s 85-80 victory over KU.

His son, Phil, an OSU freshman guard, had 11 points for the surprise victors.

“My goodness, there’s no words,” Forte said, before coming up with some thoughts. “As a dad, I’m so proud. It’s kind of heart-wrenching. I’ve got my alma mater and my son. You go with your son right now. Of course, I’ll be a Kansas fan for life.”

Phil’s son hit two free throws at :28.9 to give the Pokes an 80-76 lead and two more with 7.9 ticks left to stretch a 81-80 lead to 83-80. He also hit a layup to beat the final buzzer after teammate Marcus Smart stole the ball from Elijah Johnson and pitched ahead with OSU up by three.

“Phil struggled in the first half. He kept his composure and hit some big free throws down the stretch,” Phil Sr. said. Indeed, Phil Jr. missed four shots and didn’t score the first half; he had 11 points off 3-of-9 shooting and 4-of-4 free throwing the final half.

Dad explained the love for KU in the Forte household in Flower Mound, Texas.

“Philip as a kid ... I took him ... we saw Kansas lose in the (NCAA) championship game against Syracuse. I took him to New Orleans. He was in third grade,” Forte said of KU’s loss in the 2003 national title game. “I took him to California when we lost to UCLA out there in the Sweet 16 (Elite Eight, 2007). Of course he was there when (Mario) Chalmers hit it and they won it (vs. Memphis in 2008 title game in San Antonio). I think Philip was in eighth grade.

“Of course this was a dream of his,” he added of playing in Allen. “When KU would lose, he’d cry. For him to come in here today ... KU’s program is incredible. They have a great team.”

The ex-Jayhawk football standout said he’s looking forward to following not only his son but his alma mater the rest of the season.

Rare feat: Oklahoma State’s Travis Ford pulled off a rarity. He now has won in Allen as a player (at Missouri) and as a coach.

Withey block party: KU center Jeff Withey, who had three blocks, passed Cole Aldrich for second on KU’s all-time shot block list. Withey, who has 254, is four behind all-time KU leader Greg Ostertag, who had 258 blocks from 1992 to ‘95. Aldrich had 253.

“This one hurts, definitely,” Withey said. “We don’t really lose at home. The other time was against Texas two years ago. We wanted to pull this one off for coach (Bill Self). I know he wants to win against Oklahoma State every time just because it is his alma mater. We can spin this into a positive just like we have in the pass with losses. We’re going to get a lot better from this loss. We thought we were a lot better than what we were obviously and a loss like this will bring us back to the reality. We’re going to go get to work in the gym and get better,” Withey added.

Senior Kevin Young on whether a loss could actually benefit the team: “Yeah, I think we can learn from it,” he said. “Like coach said we’ve been playing on borrowed time. We’ve been cutting it close a lot. I mean it was bound to happen. Now that it did, we just have to spin it into a positive and come out and get better tomorrow in practice.”

Kind words: Young on what he told senior point guard Elijah Johnson after the game. Johnson had a key turnover on KU’s final possession.

“I just told him to keep his head up. This isn’t a one person loss. It’s on the whole team,” Young said. “Throughout the whole game we all made some mistakes that we could have changed.”

Individual notes: Ben McLemore hit his first five shots of the second half. ... Travis Releford (eight points) did not score in double figures for the first time in 16 games. Releford was scoreless at halftime for the first time since the Chattanooga game (11/15/12). ... Jamari Traylor tied a career-high with five rebounds. ... After not playing the first 39 minutes, freshman Andrew White III hit a clutch three-pointer in the final minute of the game; his first three in 12 games (last vs. Belmont, 12/15/12).

Little Phil played great tonight. He was living the dream of playing in Allen Fieldhouse.

Seemed like the Jayhawks kept getting life whenever PF would chuck a trey and miss. Think he finally sank one to go 1 for 8.

He was clutch in the final 2 minutes of game though.

Amazing he chose OSU over KU to play with Marcus, his H.S. buddy.

It hurts much more when the fatal blow is delivered by a traitor. If that kid was such a Jayhawk fan, close to Smart, and that good...then why in the hell did he not come to Kansas and bring Smart with him?

Oh, I don't know, maybe because Coach Self didn't recruit him? Kind of harsh to call a 19 year old kid a traitor, don't you think?

I read in a couple of other places that Self was hard after Forte and Smart. We'd have a legit National Championship threat with those two kids. It is stunning to learn they were both highly recruited by Kansas and they choose OSU.

OSU has some history, too. Not a bad place to make a name for themselves.

I think Travis Ford played at Kentucky, not Missouri. Right?

Played one year for Norm at Miz-ZOO, then transferred to Kensucky.

happy someone else other than myself incorrectly had these thoughts. :)

Self recruited Forte, and at one point offered a scholarship, but only because Smart and Forte said all along that they were a package deal. I think we were then full on scholarships, and Forte was offered a walk on spot. Maybe we banked on Forte's loyalty to KU would land him without wasting a scholarship and bring along Smart. But in the end, OSU was the only spot that gave them both a scholarship.

KU made a big mistake in not finding a way to provide scholarships to both Marcus and Phil. If you watched the two of them play for Flower Mound Marcus then you knew that they were a dynamite duo who were going to play together in college. Big recruiting flub (plus, we screwed up the Tarczewski recruitment as well).

We didn't mess up the Tarc recruitment. We got burned at the last minute by 'zona. We were the leaders for him for at least a year and then shocked of his decision. There was some shady business going on with that deal.

Suggest you call Coach Self and personally share you analysis of his recruiting results.

i have to agree with jack david. a traitor? why would you call a kid a traitor? because his dad played football at KU? is that your theory? if it is, do you realize how many so called traitors there are across united states playing sports? pretty harsh and very unfair to call the kid a traitor just because he doesn't come here. last i knew everyone has the right to chose where they want to play. and again to brock, have to again agree with jackdavid. maybe thats why your at where your at and coach self is at where he is at. . i mean coach has won 8 big 12 titles and only lost 8 home games in the 10years he has been our coach and he makes bigh recruiting flubs? maybe just maybe he can't do anymore in the recruitment of the kids, again you can recruit till your blue in the face bottom lne is the kid is gonna make a decision on where he feels he fits in the best at that time. if coach self makes such big flubs in recruiting then why do we have the 2nd best class coming in next year and thats BEFORE we know or not if julius randle is goin to commit to us or not which by the way i feel our chances on that are VERY GOOD. sorry i will continue to ride coach selfs recruiting any day any where. GO HAWKS