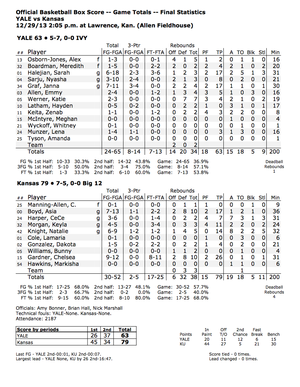 Junior forward Chelsea Gardner led KU (7-5) with 26 points. She also had 10 rebounds for her fourth double-double of the season.

Junior guard Asia Boyd had her third career double-double, with 17 points and 10 rebounds.

KU will open the Big 12 season by hosting West Virginia on Jan. 2.

Check back later at KUSports.com and in Monday’s Journal-World for more.

16 points is a solid win. Is it a "crushing" win? That's stretching things a little.

@ Len - too funny, I just logged in to ask the exact same thing. When I see "crush", I'm expecting a lot more than a 16 point win. Nice victory, either way!