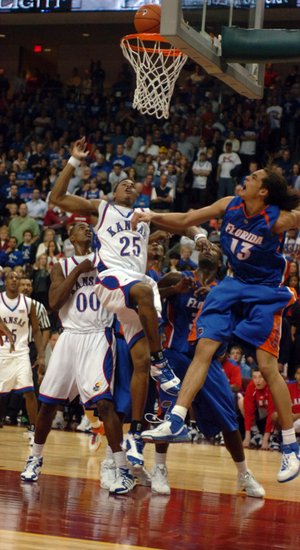 Gainesville, Fla. — It has been seven years since Bill Self’s Kansas Jayhawks and Billy Donovan’s Florida Gators thrilled the college basketball world in the finals of the Las Vegas Invitational.

That Florida team, led by Joakim Noah, went on to win a second straight national championship.

“I think we only played them once. That was a great game,” 11th-year KU coach Self said of his only head-to-head matchup versus 18th-year UF coach Donovan’s Gators.

“He’s got a good team. We’ve got a good team. I don’t think either team is as good as those teams yet. There were some hard-rocking cats playing in that game. I think both teams can get there and contend for high stakes. Certainly, we’ve got a ways to go,” Self added.

No. 13 KU (6-2) has dropped two of its last three games, including Saturday’s 75-72 decision at Colorado. No. 19 Florida (6-2) hasn’t played since a 65-64 loss Dec. 2 at UConn. The Gators also have lost at Wisconsin (59-53) and have beaten North Florida, Arkansas-Little Rock, Southern, Middle Tennessee, Jacksonville and Florida State.

“I know they are beat up,” Self said. “Wilbekin (Scottie, 6-2 senior) and Kasey Hill (6-1 freshman) are a big part of their team if they get healthy. From what I understand, chances are pretty good they’ll play against us.”

Both players will be able to play tonight. Wilbekin (ankle sprain) averages 11.3 points a game. Hill, a McDonald’s All-American, suffered a high-ankle sprain Nov. 18 against Southern. He’s averaging 10.3 points a game while playing in four games.

Gatorzone.com pointed out some other problems: Forward Will Yeguete is coming off offseason knee surgery; guard Eli Carter is still recovering from a broken leg sustained in February; guard Dillon Graham is out for the season because of a hip injury; and guard DVon Walker has been slow to recover from a foot sprain suffered against Jacksonville. Also, guard Michael Frazier had mono in the preseason, and forward Dorian Finney-Smith had a virus that had him bed-ridden for a time.

“It’ll be a tough game,” Self said. “Billy’s teams guard historically. They’ll play us zone. Everybody is going to play zone now until we start making some shots. We’ll have to play better (than at Colorado, where KU hit five of 20 threes).”

Of KU’s mind-set, Self said on Monday’s Big 12 teleconference: “I think they (KU players) are fine. The thing about it is, regardless of what anybody else thinks going into it, we knew and they knew there was going to be some things that we were going to go through.

“We know we’re playing a monster schedule, and we’re not playing games at home,” Self added. “So there is always a chance that things like that can happen. It’s disappointing to us because we know we can play better, which is a good thing, because you know you can play better. The two games we lost were against really quality opponents away from home.”

Lineup talk: Self said Monday that freshman Frank Mason would start at the point for the second straight game and third time this season. Self would not comment on whether freshman Joel Embiid would start. Embiid, a 7-foot center from Cameroon, played for The Rock in Gainesville his senior year.

“Jo has been great,” Self said on Monday’s Big 12 teleconference. “The people in Gainesville know, because he went to school at The Rock for his senior year, but he’s only played two years of ball going into this one. He’s got a long ways to go, but his ceiling is so high. He’s a sponge, and he really understands the game far beyond his years and certainly beyond his experiences.

“We’re real pleased, and he’s a fabulous kid. I know that he’s looking forward to getting back home, getting to some warm weather and having some people come watch him play that he knows well and that’s been very good to him. He’s got a chance to be a very special player.”

Embiid is averaging 9.3 points off 65.9 percent shooting in 19.0 minutes a game. He also averages 6.6 rebounds with a team-leading 17 blocks. Senior Tarik Black, who has started all eight games but gotten into early foul trouble in a majority of them, averages 3.5 points off 61.1 percent shooting and 2.8 boards in 11.1 minutes a game. He has 23 fouls; Embiid has a team-leading 29.

Releford has stress fracture: Former KU wing Travis Releford will undergo surgery on Thursday in the Kansas City area to repair a stress fracture in his right foot. Kansas City native Releford returned to the U.S. on Sunday from Belgium, where he’s been starting for a pro team. He will return to Belgium on Dec. 28 to complete rehab and return to the court.

Releford will sign copies of his new book, “Relentless,” 9:30-11 a.m. on Dec. 21 in Allen Fieldhouse. He also plans to attend KU’s game against New Mexico on Saturday in Sprint Center.

Alexander excels: KU signee Cliff Alexander, a 6-foot-9 senior forward from Chicago Curie High, scored 22 points, grabbed 20 rebounds and blocked five shots in a 66-62 win over Las Vegas Bishop Gorman High on Saturday in Chicago. Seven-footer Stephen Zimmerman, who is ranked No. 2 in the Class of 2015, had 10 points and 13 boards for Gorman. He was 4-for-17 from the field.

Frank needs to play in the beginning the way he plays when the game is on the line,thats why coach has him in the starting line-up.He also owes one to Dorian Finney-Smith for beating his high school team at the buzzer in the state championship.

Florida is a much tougher opponent than Colorado. Given the way these underachieving Jayhawks have been playing the last four games, I wouldn't be surprised if we lost this one by double-digits. :(

There is no possible way to guarantee a win, but with Florida banged up and flailing, and the way we've played lately, you'd like to see a sense of urgency from the Jayhawks and a win VS Florida would certainly sweeten up our resume come March! I like the Jayhawks in this one 78-74

I can't understand why the Hawks are struggling to make threes; it's the easiest shot in college basketball

Just an observation, but the three point shot is the lowest percentage shot in any level of basketball. General rule - the farther you get away from the basket, the less chance it goes in.

The reason we are struggling making threes is pretty obvious.

1] The guys taking the most threes are not our best three point shooters. Who do you want shooting threes, Mason/Tharpe/Wiggins/Selden, or Frankamp/Greene/White? Problem is, the latter three aren't the best overall players vs. the former four. That's Self's dilemma.

2] The best three point shooters have not been permitted to participate regularly in games, get in the flow of game action, and to shoot without looking over the shoulder. If a shooter is tight, nervous, unsure, it's going to lower a guy's ability to execute. So even when they get in, they're not at their peak ability - again, trying to execute a difficult skill. Self had said he needs to pick one -- Greene/White/CF. Our better players are in the rotation, and there's only room for one. Not the cure all, but a start.

Wow! This has been my opinion for the last couple weeks, even before we started to go sideways. The wrong guys are taking the shots, need to pick between White and Greene. In my opinion CF is out, we already have 2 smaller guards in Mason and Tharpe, need more athletic ability/height to use to our advantage. I would rather not see Mason/Tharpe in the game at the same time, EVER again. It might have looked good for a spell against Duke, other than that the ball sticks when both are in, plus it totally negates our talent level to have two sub 6 foot players, that can barely guard on defense, in the game at the same time with all of those other studs watching from a chair..

You're right. Good catch. It must've been a typo in the preview notes sent out by KU. Thanks!

I was at that game in LV! It pissed me off when I read commentary after the game that Florida just had an off day because from what I witnessed Florida played really well, Kansas was just a better team when they were on (which they were that night). Kansas was still inconsistent that year though (they struggled the night before against I believe it was Ball State) and needed another year to improve enough to win 6 games in March.

Evidence might suggest that Florida had an off day, given that they were the defending national champs and went on to win the national championship again that season; at least when I take off my crimson and blue colored glasses anyway!

Time to get back on track

Would like to see Wayne Selden play the 1 so we can get a shooter ala White,Greene,Frankamp at the 2 and wigs at the 3 for stretches of the game. Were going to have to manufacture some three point scoring to keep the defense honest and open up the lanes for the dribble drive

1] Interesting what a fine line Top 25 basketball is. Kansas is two desperation three point shots away from being 6-2 and dropped out of the The Top Ten at 13th to undefeated at 8-0 and ranked #1 in the country!!

2] Just a feeling, but I think the team we have all anticipated since summer shows up tonight and spanks Florida. [ Of course, I bet on the Buffalo Bills in the Super Bowls, Dewey for President and General George Custer to win in a rout!! ]

4] That KU win over the NC Florida team was a battle of heavyweights....Florida played quite well, by the way. We played just a little bit better!!

The zone D didn't work out so well for Custer but I would like to see us hit at least 40% from 3 and whack the hell out of the boards on both ends.

Lineup I'd like to see sometime: Selden (point), White, Wiggins, Ellis, Embiid. I think this lineup would be a good balance in terms of defense, shooting, length, and passing. Tharpe/Mason would be the first to come off the bench for White. And when the game is on the line or we're playing against a team that presses, we have Mason and Tharpe in there together, with Selden, Wiggins and Ellis. Feel free to tear me up on this one.

Tommy: The only thing you're missing there is ball handling. It is the most important skill on the court. Without, you can't function. That lineup would be cool for a few minute stretch, but it has no staying power. If Selden could handle the ball like Mason, or even EJ, you would have something there.

My goodness everyone sure is obsessed with the three pointer. I'd love to see the KU perimeter players figure out how to feed the post for some 65+% bunnies that also draw fouls and get the opposition's players in foul trouble.

Beat me to it, I just saw it on my facebook

I hate to say it but we've all bought into the hype. Hope they can get it together before end of season (and game)!