Kansas players and head coach Bill Self huddle together in the second half on Tuesday, Dec. 10, 2013 at O'Connell Center in Gainesville, Florida. 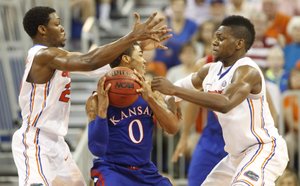 Images from Tuesday night's game between the Jayhawks and Gators in Gainesville, Florida.

GAINESVILLE, FLA. — The number of areas in which Florida’s basketball team outdid visiting Kansas University during a 67-61 UF victory on Tuesday at the O’Connell Center reached double digits.

But few told the story or made the difference as much as the experience of Florida’s guards against the youth of the Jayhawks, who fell to 6-3 and dropped their third game in the four tries.

On a night in which KU started four freshman for the first time in school history, Florida coach Billy Donovan found comfort in a starting lineup that included four tried-and-true seniors who combined to score 43 points and rip down 20 rebounds. Senior guard Scottie Wilbekin (18 points) and senior forward Casey Prather (12 points, eight rebounds) paved the way on the perimeter, and Florida’s big men dominated inside to set the tone for what proved to be a long night for the young Jayhawks, who were led by freshman Andrew Wiggins’ 26-point effort.

“Guys like Wilbekin, Prather, those guys have been hardened,” Donovan said. “They’ve been scarred a little bit. How much adversity has Wiggins ever faced on the court? Those guys are gonna have to learn different things, and there’s a process they have to go through.”

Part of that process includes learning how to play together, overcome adversity and adjusting to the speed, intensity and every-day grind of college basketball. Each of those elements — and likely several more — figure to jump off the screen when the Jayhawks re-watch this one in the film room in Lawrence. But Donovan, whose Gators improved to 7-2 and won their 21st consecutive home game, said he did not believe the Jayhawks would find anything to be alarmed about.

“Listen, Bill is going to have a really, really good team,” Donovan said. “It’s obviously early. When you look at 6-3 and think, ‘Oh my god,’ the reality of it is, I get excited when coaching a team with a huge ceiling, and there may not be another team in the country that has as good of a ceiling as they do.”

Donovan’s praise of KU’s pups did not stop there.

Those traits and what the Gators did to overcome them might have been an indication of just how well Florida played Tuesday. Kansas coughed it up a season-high 24 times, and Florida maintained a double-digit lead for much of the game despite shooting just 37 percent from the field.

Most of the reason for that came from the Gators’ defense, which held KU scoreless for an eight-minute stretch of the first half and sparked a 21-0 UF run that proved to be too much for Kansas to overcome.

“Our zone was good,” said Donovan, noting that he tried to throw as many defenses as he could at KU and relished the results of the 1-3-1 and 2-3 zones. “I think the difference in the game was, we forced a lot of turnovers tonight. With (Frank) Mason and (Naadir) Tharpe, they’re not big guards, and I thought it was difficult for them to throw over and around our guys. Our length, I think, caused some issues for them.”

A positive that Donovan talks about is the poise of our freshmen. They aren't pouting or pointing fingers are each other and that seems to speak volumes about how they view their individual responsibilities.

If Wiggins starts to find his stroke from three he is going to suddenly open up his offensive game and open up shots for others. Getting extra practice time for our guys to figure out how to make quick, accurate passes will help a ton.

I'm glad our weakness for zone defense is getting exposed now instead of in March because it will give us a few months to improve. Teams will not do as well against us man-to-man. We have too many slashers (Selden, Wigs, Mason) and good post shooters (Ellis, Embiid).

If Greene can keep finding a way onto the court we will be able to use his three point shooting. Greene, Frankamp, and White just have to work on defense and not turning the ball over. Once they start getting more consistent there they will be able to get used to consistently shooting 3s in real college games.

I'm still excited for our team. That 2nd half showed that our guys want to win and have the skill to take over games. They just need to be able to turn that switch on more consistently and keep it on.

Wiggins was 4-8 from 3, and some of them should have been worth 4. Hopefully, that means he has found his 3-ball, but we also need another deep shooter to step up.

They'll need to learn how to attack the middle of the zone also, because some nights the deep shot's won't be falling. Besides, Ellis & Embiid in particular are too good to let a zone eliminate them from the O.

Our perimeter defense needs to be improved as well. The treys are killing us. FL does a lot of screens, pick-n-roll while we are busy doing side-to-side even when the screen is there. But what amazed me is those freakin' refs showed favoritism once again. Like DickieV said those refs are absurd!!

Naadir doesn't look like he's too interested in what Tarik is saying in the above picture. It appears as if Tarik is trying to step up and lead...in which case, I dig!

There is an old saying " You must lead by example " Black is not playing well at all so he can't be much of a leader. Plus , even though Black is a 5 year players he is a 1 and done first year player at KU. HCBS well tell you " You can't coach effort" and this team lacks effort at times. We don't hustle back on defense. We are slow to get after loose ball, WE DON'T BLOCK OUT 90% OF THE TIME, We hold the ball way to much and we refuse to penetrate the zone defenses. We pass the ball around and around , try to lob it over the top ( Resulting in a turnover most of the time). Guards MUST penetrate a zone to break down the defense Tharpe knows that but still he doesn't. Our wings don't get set to shot and many times are still sliding when they put up a shot ( usually resulting in a miss ). We don't start a balanced team .. Nothing against Selden but the team would be better balanced if we started one of the "3 point shooters", subbed Selden for Wiggins when he needs to rest. and sub another "3 point shooter" for the starting one. Zones are going to continue to compact until we get an accurate shooter on the floor. Last game was the first time we actually gave one of the 3 "shooters" real minutes. They need to know they are a real part of this team and not just a correction sub. ( for a player who need a talking too ). I know there is a lot of pressure on HCBS to play Selden recruiting wise, but we are not going to win against good teams unless we develop a balanced scoring approach with the right players.

I agree regarding Selden. I would rather see AW3 and Greene at SG and Selden give Wiggins a breather. Raise your head Greg, it isn't that bad in all honesty. We're not as far off as it seems.