Colorado guard Askia Booker eyes the bucket as he is defended by Kansas guard Frank Mason with seconds remaining in regulation on Saturday, Dec. 7, 2013 at the Coors Events Center in Boulder, Colorado. Booker made the three giving the Buffaloes the win. 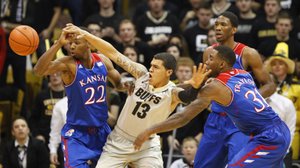 Images from Saturday's matchup between the Jayhawks and Buffaloes at the Coors Events Center in Boulder, Colorado.

Bill Self after 75-72 loss at Colorado

Bill Self after 75-72 loss at Colorado

Colorado junior guard Askia Booker burned visiting Kansas University with long buzzer shots not once but twice Saturday in leading the Buffaloes to a 75-72 victory in front of loud crowd of 11,113 Saturday in the Coors Event Center. Both three-pointers broke ties.

Booker had no trouble calling it the greatest finish in which he ever has participated.

“Without a doubt,” he said. “Unless I’m in the NBA championship. That’s the only thing that could top that.”

Kansas made a nine-point run in the second half to tie the score, but the Buffaloes (9-1) were able to hold it together. Booker said CU assistant coach Rodney Billups stressed remaining poised.

“He said that they might make a run and that they would be aggressive and attack the basket,” Booker said. “That’s exactly what they did. Andrew Wiggins got to the line and then made some hard layups. At the end of the day, if we don’t keep our poise, we don’t win these games.”

Colorado coach Tad Boyle, who has once-apathetic fans so excited about basketball that at least 90 percent of the tickets were in the hands of those backing the Buffaloes, liked everything about Booker’s running 30-footer that won the game.

More than one player’s clutch three-pointers won the game for Colorado. The 2-3 zone coach Tad Boyle had his players in for most of the game frustrated Kansas into taking 20 three-point shots, of which they made just five. KU shot .710 from inside the three-point semi-circle but attempted just 31 two-point field goals.

“We wanted to make them a jump-shooting team, whether we played them in man or zone,” Boyle said. “With the zone, it’s easier to keep the ball out of the post, and they’re such good post feeders and such good post players.”

Boyle usually prefers to play man-to-man, but with Kansas shooting poorly from the outside so far this season, it made his decision to go outside his comfort zone an easy one.

“I swallowed my pride when I went zone,” Boyle said. “If they would have made some shots against it in the first half early, I probably would have gotten out of it, because I’m not committed to it. But they didn’t. They struggled with it, and so we stayed with it.”

Coors Event Center used to be known as Allen Fieldhouse West, but not this time.

“Last year against Arizona, I was mad the students rushed the court,” Boyle said. “I was happy for them today because of what this win means to them and the support that they’ve given us.”

Neither buzzer beater was easy. Booker and Boyle deserve a lot of praise. We have a long way to go, but we can and will recover and come March be a very dangerous team. If we lose to anyone, glad it's to a former KU guy.

Booker definitely walked prior to shot. You don't Get 2 1/2 steps. Not NBA BS.

Boyle utilized his best option to beat us: force us to take outside shots. We failed miserably. I don't understand how we can be so lousy at shooting the 3 ball. Florida would be stupid to not play zone against us tomorrow, hell any team for that matter. We are still incapable of hitting 3's. It's pretty sad. Frankamp is starting to look more like Jeff Hawkins and Teahan, lights out in practice and a dud in the games. His sole reason for being in the game is to make the trifecta.

I haven't seen a lot of Florida this year, but I wouldn't be surprised if we go down there and get beat. New Mexico on Saturday? Yikes.

Keep plugging away at it Hawks. Better to lose in December than March.