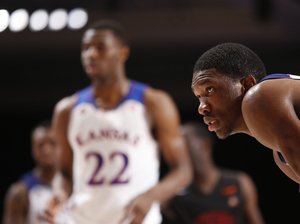 Bill Self will have a blast holding up a mirror to his players by watching video of them, and he’ll use it to teach them how to move the ball better.

Self’s Kansas University basketball team will improve through those sessions, but there is another issue every bit as important.

Freshman center Joel Embiid, who has emerged as KU’s most dominant, most important player, must learn how to stay out of foul trouble so he can become a 30-minutes-per-game player instead of averaging the 17.3 minutes he has seven games into his collegiate career.

Kansas dominates with the basketball prodigy on the floor and is just another team when he watches.

At least that’s how it has looked. Statistics can’t ever be the starting point for evaluation, but they are nice in contradicting or validating your eyes.

Embiid’s plus-minus numbers do more than that. They make the eyes pop.

Statsheet.com tracks plus-minus points, as in how the team does when each individual is on the floor.

Let’s start by using all seven games and work our way back to the three games played in the Bahamas.

Embiid’s plus-minus average of 13.5 points per game is extraordinary for someone who doesn’t even play half the game.

The Jayhawks score at roughly the same rate with (1.8 points per minute) or without (1.9) Embiid on the floor. It’s on defense where his presence is felt most. With Embiid in the game, opponents average 1.5 points per minute, 1.9 when he sits. Over the course of a 40-minute game, that equates to a difference between 60 points and 76 points.

Now let’s take a look at the most recent five games, eliminating the season-opener against Louisiana-Monroe in Allen Fieldhouse and the United Center victory against Duke.

That leaves Iona, Towson, Wake Forest, Villanova and UTEP. The only time KU was not outscored while Embiid sat came against Towson — KU owned a 28-point advantage when Embiid played, a two-point edge when he sat.

In the Bahamas, foul trouble limited Embiid to 48 minutes in three games, time enough for him to amass 29 points, 17 rebounds and 10 blocked shots, seven of them in the second half of the UTEP game. The bad news: He was whistled for 13 personal fouls.

With Embiid on the floor, Kansas outscored foes, 94-63. With him sitting, opponents had the advantage 141-119.

All these numbers are starting to make my head hurt. Besides, they all add up to the same thing. Embiid makes his team way better when he’s on the floor, so when he learns the difference between plays that draw whistles and those that don’t, look out.

The high-wire act for Embiid becomes how to cut way down on fouls without sacrificing an aggressive style that so greatly plays in him changing games.

Embiid is a developing asset, but Ellis is the glue holding this team together. Maybe in a year, if Embiid sticks, he might be the most valuable player.

Agreed. I love Embiid, but I don't think Ellis gets nearly enough credit for his contributions.

Ellis might be the least talked about, best player on a top tier program in in country...

I think you guys missed the point - Ellis is great, Naadir is great...none of them have impact on the game that Embiid has ...all because of his defense. Given Bill's (understandable) emphasis I defense winning games, I think he would agree with the point of the article: without Embiid in the game for 30 minutes, we get beat by teams who are named Villanova or even UTEP. If he can get his minutes up then we have a shot at a National title. That assumes that the other players keep doing their job.

Ellis is steady, can be counted on, just needs to keep improving in every area. Defensively, Wiggins is steady. Having Embiid on the floor to complement those two guys is the biggest key. He's the guy who can improve the most (Wiggins second) and therefore improve the team the most by being on the floor, not the bench. He stays out of foul trouble and Kansas is a different team.

Embiid is a huge need for us, but if we don't improve our outside shooting a title is going to be very difficult.

What are the rules regarding the width of stance in setting a screen? Joel needs to make sure a knee is not sticking out, but what exactly is "too wide?" Are feet allowed beyond shoulder width? If so, how far? Is it just an eye test by the refs? Anyone know?

I'm OK with fouls under the basket to prevent an easy shot. But, with a little focus most of the illegal screens (Jamari) can be avoided.

I don't think there's a rule as to the width of the stance; I think the problem comes when a player leans a little to try to make sure the screen is effective. That's generally when they're getting whistled for fouls.

I think as long as they don't move, the stance can be any width they want.

I've said it before, I'll say it again. Joel Embiid will be the national player of the year if he comes back next season. He is the best true center to come around since Olajuwon and his ceiling is high enough that Embiid could be in the hall of fame one day.

Is it too early to compile stats showing WHERE this year's fouls are occurring, compared with previous years?

The new rules were supposed to significantly reduce the hand-checking that went on around the perimeter. But it seems like our bigs are the ones continuously in foul trouble. Does this hold true with most other teams?

The new rules seems to be having a greater impact on our interior game, resulting in more big men shooting free throws, thus lowering the FT%. Do stats prove or refute this observation?

Fascinating analysis, Tom. Can you do the same thing for Jeff Withey's plus-minus points last year, or the year before? Jeff should be the gold standard, for comparison.

Great article. I have never seen a player like Embiid in my 17 years of following KU basketball. He is a beast. He needs to be on the floor as much as Self can keep him out there without fouling out.

Scut makes a good point about who would you go without..If Embiid can develop and play 25-28 minutes a game like the article mentions, I would rather do without Ellis or Wiggins than Embiid. If he does not develop far enough this season then I agree Ellis is the most valuable.