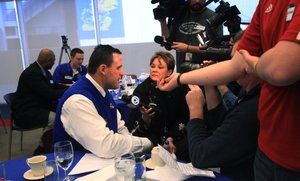 Grunhard, who confirmed last week that he would resign following his second season at Kansas, coached KU’s offensive line for two seasons under head coach Charlie Weis, with whom he was connected through their alma mater, Notre Dame. Grunhard cited a desire to spend more time with his family, which includes four high-school-aged children, as his reason for stepping away from coaching.

Following the loss to K-State, a couple of Jayhawks took time to talk about Grunhard’s impact on the program during the past two seasons.

“I can’t say I’m sad to see Tim go,” Weis said. “Because I know that he’s happy. I know he’s happy to be able to go spend some time with his wife and kids.”

Grunhard’s resignation, which was first reported by the Journal-World, did not appear to be a distraction for the team as it prepared to take on K-State. If anything, it may have helped fuel the Jayhawks’ fire.

“I think if you saw how passionate the players had been here in the last few days,” Weis began, “there is not one of those offensive linemen that didn’t benefit from Tim being their coach.”

Senior center Gavin Howard, who said he benefited tremendously from Grunhard’s 11 years of NFL experience, credited Grunhard for making his transition to center during his final season much smoother.

“Any time he told you something, you knew it was coming from experience,” Howard said. “You knew he had done that on the highest level for a number of years. Coach Grunhard’s been a really good coach and a really good role model for all of us.”

Grunhard’s decision to step down opened up a vacancy on Weis’ staff, but it appears the opening was short-lived. Sources told the Journal-World last week that Rice offensive coordinator John Reagan would be hired to replace Grunhard and would serve Weis in the dual role of O-line coach and offensive coordinator. Weis neither confirmed nor denied the report but said in a joint press release with Grunhard that a replacement had been hired.

Rice’s 17-13 victory over Tulane last weekend earned the Owls (9-3) a berth in the Conference USA championship game scheduled for Saturday against Marshall (9-3). A source told the Journal-World that Reagan was expected to coach that game but likely would not be with the Owls for their bowl game.

Weis’ comments Saturday regarding moving forward without Grunhard seemed to mesh with that timeline.

“Tim leaving (is) a little bit of a bump in the road because there’s some guys that get really close to you in recruiting,” Weis said. “But we’ll go out there and rally, and we’ll get Tim’s replacement in before Christmas break.”

As for the handful of Class of 2014 commitments recruited by Grunhard, Weis is putting them near the top of his priority list as he heads out on the recruiting trail.

“I’ll be in all their homes this week, personally,” he said.

"Well, I'm not the kind to kiss and tell, But I've been seen with Farrah. I'm never seen with anything less than a nine, so fine.

I've been on fire with Sally Field, Gone fast with a girl named Bo, But somehow they just don't end up as mine.

I might fall from a tall building, I might roll a brand new car. 'Cause I'm the unknown stuntman that made Redford such a star"

Reckon someone had to be the fall guy.

By the tone of "Zenger's confidence"...it won't be Weis. SMH

Brett - recruits are seeing the writing on the wall with the Weis era. Many if us fell in love with KU football during the Mangino days...but this program is in BIG trouble.

Another year of no improvement. Don't see any positives going forward without at least ten new starters. No QB, no Oline, awful receiving core, defensive line never got push this season and a total flop in the kicking game. So many holes and no answers.

Those all sound like talent issues rather than coaching issues. Nick Saban couldn't win with the players we are putting out there. It takes time to get quality talent on the field.

I will disagree, the d-line was much improved from the season before. Yes, they weren't leading the conference in stats, but if you look back the stats of the D-linemen were as good as they have been since 08-09. The defense all around has been better. But that can not be said for the OL, WR, and QB... New coaches for the WR/QBs please

Let's see what kind of instant impact juco guys we can bring in before we start panicking; we have some really good RS Jrs that will start next year.

The X factor to me is TJ Millweard; he is faster than Heaps and supposedly more accurate than Cozart. Should be interesting; hopefully he get an opportunity.

Yes we have to have a QB with mobility who can give us a run pass threat, otherwise read option is useless. I will agree that Dline was better at run but still no push on QB against the pass. And finally reiterate that kicking game is pitiful. Padura was good addition, but his punting was pretty inconsistent, and fg kicking is laughable.

JuCo players are rarely impact players. Someone like Cassius Sendish is what coaches want from JuCo players. Sendish didn't do anything flashy, just went out and did his job. You rarely heard his name called which is not a bad thing for a secondary player because that means he rarely got burned or was out of position.

Agreed, Sendish, Mcdonald, Johnson were all nice surprises and Johnson is only a Sophomore. We have RS in Fafili, Bolton, Millweard, Hyman, Spencer, Jenkins-Moore, Thomas, and Harwell. We have some JUCO and freshman red-shirts that I think could really help us out. They have all had a year to get big and work hard, competition is a good thing and I think if Weis can get some more solid JUCO guys and freshman in here who want to compete and get better we could possibly looking at something good.... But i hate being optimistic and being disappointed. But hey I love my jayhawks

Using just KU as an example; your logic is flawed. Mcdonald, Isaiah Johnson,, Tedarian Johnson, Ngalu; those guys made quite the impact and improved our team.

I have a question for you Matt that a lot of people are wondering about. I know Weis would likely wait until after next weekend to officially announce any potential coaching staff changes since everyone will be done with the regular season and conference title games, but any chatter around the football offices that Weis might be getting ready to replace anybody else on staff?

Brett I agree on both of your points, Reggie Mitchell is the only person that has shown he can consistently make players better and coach them.

Meanwhile, I hear Ed Orgeron has become available as a head coach. Let's fire this blowhard Weis and get Orgeron!

If only that was a possibility

Maybe I'm not seeing things correctly, but I don't think you can lay a lot of blame on Jake Heaps. I can't imagine how frustrating it must have been for him to watch drop after drop after drop. I do know how frustrating it was for me. The interception where Mundine juggled a perfectly placed throw is a great example, but by no means the only one. He looked pretty dang accurate to me for the most part, but he can't both throw em and catch em. Hopefully we can get some receivers that don't have bricks where their hands should be.

Heaps' first interception , as you stated was certainly not his fault. However his 2nd and 3rd were both awful throws and were all his.