Members of the Kansas University volleyball team watch the NCAA selection show on Sunday, Dec. 1, 2013. The Jayhawks learned they again would host the first two rounds of the tournament. 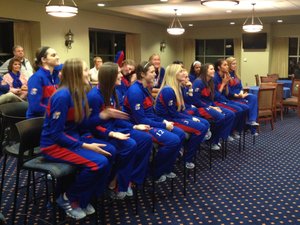 Members of the Kansas University volleyball team watch the NCAA selection show on Sunday, Dec. 1, 2013. The Jayhawks learned they again would host the first two rounds of the tournament.

Intelligence was one of the key traits that contributed to the Kansas University volleyball team’s 23-7 season and second-place finish in the Big 12 for the first time in school history.

And Sunday night, in the friendly confines of the Naismith Room on the second level of Allen Fieldhouse’s east side, the team’s smarts were on full display as the Jayhawks learned their NCAA Tournament fate.

So when the field of 64 was revealed, region by region, the Jayhawks tried to get a jump on the committee by process of elimination. First came the Missouri site, and Kansas was not included. Then came the Nebraska site and, again, no Kansas. At that point, the Jayhawks unleashed a mini-celebration, believing the third option — hosting for the second year in a row — was more likely than ever.

That joy paled in comparison to the explosion that came about eight minutes later, when the name Kansas finally appeared on the TV screen, and the Jayhawks found out they officially were hosting once again.

Even though the Jayhawks knew they were in, waiting until the waning moments of the selection show to find out for sure made for some anxious moments.

Fellow senior Catherine Carmichael said she and her teammates entered the night with no idea what to expect and felt their hearts race as each piece of the puzzle came into view.

“I feel like that always happens to us,” Carmichael said of having to wait until the final region to see her school’s name. “I’ve been here for five years, so I’ve been here when we haven’t made it to the tournament, and I’ve experienced the joy of seeing our name come up on the screen.”

Although the wait was long, the Jayhawks believed it was worth it.

“I like this,” senior Caroline Jarmoc said. “They’re playing with your nerves, but it’s fun.”

The Jayhawks earned the No. 14 overall seed and will play host to Wichita State (28-6) at 6:30 p.m. Friday at Allen Fieldhouse. The Shockers ended the Jayhawks season in the second round of last year’s NCAA tourney, at the same site, no less, and that fact was not lost on the Jayhawks, who already were calling their portion of the tournament field the “redemption bracket.”

The winner of KU-WSU will play at 6:30 p.m. Saturday against the winner of Friday’s 4 p.m. Arkansas-Creighton matchup, with a berth in the Sweet 16 and a trip to Los Angeles on the line.

KU split two five-set thrillers with Arkansas earlier this season and also lost at Creighton before responding with a 10-match winning streak.

The rematch with Wichita State is particularly exciting for the Jayhawks, who finished the season ranked 12th in the RPI rankings and 21st in the AVCA poll.

“I just remember thinking in the locker room last year, when we were all crying, about what I’d do to do it all over again,” Riley said.

This year’s NCAA Tournament appearance will be the fifth all-time for KU, and all five appearances have come under Bechard, who is in his 16th season leading the program.

Despite getting back to the postseason for the second year in row, Bechard said moments like the one his team enjoyed Sunday never get old.

“Not at all, not at all,” he said. “You look forward to this day coming around.”

As for whether his team is equipped to advance out of Lawrence and into the Sweet 16 Dec. 13-14 on the campus of the University of Southern California, Bechard said a senior-heavy squad and the fresh memory of last year’s run were huge advantages.

“Having gone through it last year will help us more than anything,” he said.

Added Jarmoc: “The best part is we’re hosting. I remember being extremely happy last year, and this year is even better.”

Lets finish the season strong! Need to send the seniors out in style w/ a great tournament.

We are 28 and 6 and the NCAA gave us a team that knocked us out last year and 2 teams that beat us this year?

Is that odd to just me?