Opinion: Bonnie puts on quite a show 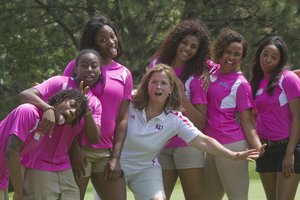 The popularity of Bonnie Henrickson’s annual golf tournament at Alvamar shows how appreciative the community is for everything the Kansas University women’s basketball coach does to heighten breast-cancer awareness and how well-run the event is every year.

As for what Bonnie’s basketball team accomplished in back-to-back seasons, the rest of the coaches in the Big 12 ought to build a statue in her honor.

Seemingly leaning toward the wrong side of the bubble in both seasons, the Angel Goodrich-led Jayhawks not only earned an NCAA Tournament berth but made it all the way to the Sweet 16 both times. Think about it: Every time the selection committee discusses a Big 12 bubble team, the lead sentence in the argument in favor of inclusion should be, “Look at what Kansas did the last two times it was a bubble team.”

Entering her 10th season as KU’s head coach, Henrickson never has posted a winning record in Big 12 play, but is coming off consecutive Sweet 16 appearances. Nobody ever again has to say the Big 12 is a loaded conference. Kansas proved it.

“I think it speaks volumes to how good the league is,” said Henrickson, whose team defeated Nebraska, Delaware, Colorado (in Boulder) and South Carolina in the NCAA Tournament the past two seasons.

It’s worth wondering how Danielle McCray’s bubble team could have performed had it received an NCAA Tournament bid instead of having to settle for making it to the WNIT title game.

Anyway, coaching her team onto the bubble will be the tough part this season for Henrickson, who must find a way to overcome the graduations of 1,000-point career scorers Goodrich, Carolyn Davis and Monica Engelman.

Natalie Knight, blessed with a soft shooting touch and a smart player who seldom turns it over, is back from knee surgery. Center Chelsea Gardner has sure hands and knows how to score. Asia Boyd is tough to stop driving to the hoop and rebounds well for a perimeter player, but will need to perform with more consistency.

Henrickson welcomes a talented, five-deep freshman class that includes twins Dakota and Dylan Gonzalez, the most photographed freshmen in program history. We won’t know for a couple of months how the five freshmen will make the transition to the college game, but they certainly made a nice impression mingling with the crowd while the golfers ate and made their silent-auction bids.

As usual, pace of play was brisk, which keeps players returning to this well-organized tourney played on both Alvamar golf courses. Henrickson, in the midst of negotiations for a multi-year contract extension, threw the credit for that to director of operations Katie Capps and to volunteers from the Hardwood Club, the women’s basketball booster group.

Looking forward to the Lady jayhawks play this season

I am too, but don't think they will finish above .500 again this season in Big 12 play. Hope this will not be the case though.

Relax ~ Fortunately your opinion is just that ~ those charged with making that decision are (much) more competent to do so. In the meantime ~ how about being a true Jayhawk and wishing this years team all the best.

"In the midst of negotiations for a multi year contract extension" but never posted a winning record in the Big 12 you have to be kidding right? I would not be the one to have my signature on that contract.

Your right ~ but probably for not the same reason you intended.

Tom, I surprised you don't have an article about Gary Woodland being tied for the lead after the 3rd round of the Barclays. Also if it takes Bonnie being on the hotseat to perform, give her 1 year contracts until she misses the tournament and then get a coach that can take KU to the top of the Big 12 and be favored to make deep runs in the NCAA tournament.

Can't we just get Coach Self to run this program on the backstroke? :)

Guess Keegan has the two seniors sitting the bench(unreal) Much as he has ragged on Bonnie in the past, guess he is on her bandwagon now. Stellar freshman class on paper maybe, on the court it has to be proven. I am rooting for the team, but I am not sure how much faith the coach has in them. Good luck ladies as the big 12 will be tougher this year with Texas and also TCU improving from last year

Coach has done an incredible job the past two seasons. With the injuries her team faced, they could have easily folded, and they didn't. Love it, and Rock Chalk Jayhawk!

If she did an incredible job the last 2 years, it must have been at her other job. Nine or ten years and she has never finished higher than 5th in the conference. Lew Perkins, the gift that keeps on giving.

The time to replace her is after this season with a solid Freshman class ready to take over next year - I'd say if she doesn't have a .500 B12 record she needs to go.

Keegan's hyperbolic comment that the rest of the Big 12 coaches should build a statue in Bonnie's honor is a bit much.

But nice to see a column on the women's program. They may not finish above .500 again this year, but the twins should put a few more butts in the seats and get plenty of media attention.

After having read some of the hype on the twins and seeing how the Lady Hawks done in the past two post-seasons, I thought I'd look at the schedule to see when I could catch a game on TV.... What!?!? NO games on TV? What's an outsider on the left coast to do?

Does anyone know if any KU women's games are available via internet feed?

Meanwhile, Rock the Chalk as usual!!