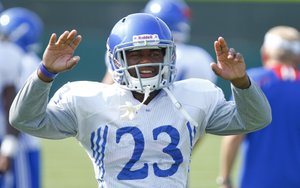 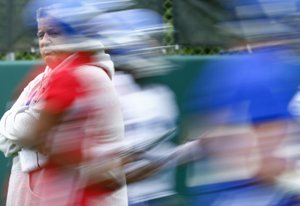 Dexter Linton had to stop himself from crying.

Linton, a Kansas University safety, sat at his locker following the Jayhawks’ 25-24 home loss to Rice on Sept. 8 of last year, knowing if he’d made the tackle on fourth-and-four against Rice tight end Vance McDonald in the final two minutes, his team would be celebrating a victory.

“I just felt like I lost the team the game personally,” Linton said. “I knew there were more factors to it, but I felt like I could change the game, and I didn’t do it.

“So I just felt like everything was over for me.”

Instead, it turned out to be a new beginning.

Looking back, the 5-foot-10 1/2, 195-pound safety says the tough time helped turn him into the player he is today.

Though a few teammates came over to him and patted him on the shoulder after the game, it was a message from Darius Willis that stuck with him after the linebacker pulled him to the side.

“Everything’s changed since then. I have no fear about messing up any more,” Linton said. “I know I’m going to mess up, but I’m just going to push through it and try to make plays next time, next go-round.”

Linton immediately showed his ability to bounce back. A couple of days later, he was told by coaches he would start the team’s next game against TCU.

The senior ended up playing in all 12 games while starting two for the Jayhawks a season ago, racking up 26 tackles and two pass break-ups.

He’s hoping for more this season.

“If I could get interceptions, that would be beautiful,” Linton said. “PBUs are nice. Tackles are nice, too. But I need interceptions. I need turnovers.”

He should have plenty of opportunity.

On the latest depth chart, Linton is listed as the starting strong safety ahead of freshman Tevin Shaw and sophomore Tyree Williams.

KU assistant head coach Dave Campo, who oversees the defensive backs, says Linton didn’t immediately show all his talent a year ago but instead was “one of those guys that has continued to chop wood.”

Campo went on to say that every secondary needs one person who controls the group, and he could see Linton being that player.

“The No. 1 attribute he has is, he’s smart. There’s a lot of those guys playing in the National Football League where some guys more talented are going home. That’s what he brings to the table,” Campo said. “But he’s got speed. He’s got coverage ability at safety, which … that’s a real luxury, because if we’re going to be a pressure-type football team — which we have to be — he’s a guy that can do some coverage stuff.”

Willis said he has seen a new dedication in Linton in the last year, as he’s improved his covering skills and play recognition. Willis also has seen Linton work harder this summer in the film room.

“He’s not second-guessing himself,” Willis said. “That’s big at his position.”

One reason for the confidence, Linton says, is the learning experience that came after a missed tackle a year ago.

Now, Linton believes he can overcome anything that might come his way.

“It just helped me know that my teammates had my back. Regardless of what I do, they’re behind me,” Linton said. “Now, I just have no worries. Now I can just be myself, and that’s the greatest feeling in the world.”

Are you kidding?!?! I balled like a baby after we won the orange bowel! Reesing to Myer was more of a rock band hotel room trashing with excitement followed by remorse tears after I realized what I did to my house and had to explain to my better half.

I jumped up with my arms up and broke a light bulb in the ceiling fan. Not quite rock star thrashing a hotel room, but I know where you're coming from. I hope to break some more bulbs this year!

I did that when Danny hit the last two free throws in 1988. Messed up my hand from punching the ceiling popcorn.

I totally understand. Keep the faith - one day you will make your first tackle.

Nice article. Haven't checked the author, but was going to suggest that Matt talk to Jesse to figure out how to imbed a few video clips. Are you really going to make us go search for plays? You've obviously spoiled us.

I've been crying ever since KUsports.com announced Perkin's witch hunt on Mangino. Oh it's been a long 4 years since.

Now...we just need 40 more of these types of guys. I criticize others for doing so, but now I am wanting to drink down the Blue Kool Aid, I'm giving into the hype machine and starting to believe. I'm thinking about a drive up from Oklahoma to see a game to support this mess. Four wins! Just four!

5 wins or bust. 4-8 doesn't prove a thing. If we win 5 then I'll believe that we're on our way to football respectability. If we win more than 5 then I might start having dreams of KU football greatness.

Thanks for the article. Mental toughness comes for those who fight, even in the face of losing. Therefore I think we have an advantage over some teams. This year if we are close in as many games as we were last year, we will win most of them.

Through adversity, comes the character of a person. You can stay down and be defeated, or rise and be victorious.

A nice article Jesse,it reminded me about how close we were to a nice win over Rice. The biggest lose that sticks in my head the most from last season,is still Texas. I mean we had the lead late in the game. The Texas QB drops back to pass,he throws it right into the chest of a KU player ,who drops it. If he makes the interception it would have been, probably game over and a win for KU. That one still bugs me a little,but that was then and this is a new season. Time to forget the bad and hope for the best,this season. I won't make any wins or loss predictions for this year ,because if I'm the coach. I wan't my team to think about championships and Bowls games. I want the team to believe that they can win every game they play. So as a fan I will take the same attitude,this season. The reality just take it one game at a time. Good luck this year to the players and the fans,who will always support the team.

I did not remember the name of the culprit ,who missed the interception. Yes Tyler Patmon did transfer to OSU Ralster.

It was Greg Brown who dropped that INT in the Texas game.