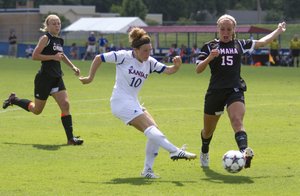 Kansas University’s Caroline Kastor (10) tries to get a shot past Nebraska-Omaha defender Jordyn Braun (15) during an exhibition soccer match, Sunday, Aug. 18, 2013, at the Jayhawk Soccer Complex.

Kansas University's soccer team won its first and only exhibition game, 1-0 against Nebraska-Omaha on Sunday at the Jayhawk Soccer Complex.

KU sophomore Liana Salazar converted on a penalty kick in the 20th minute for the game's only score. Salazar's kick was set up by a hard foul on KU freshman Ashley Pankey.

The Jayhawks outshot the Mavericks 26-5, including 9-0 on goal.

Kansas will open the regular season against Arkansas on Friday in Fayetteville, Ark.

9 SOG and only 1 found the net, that's gotta improve if KU wants to make the NCAA tournament.