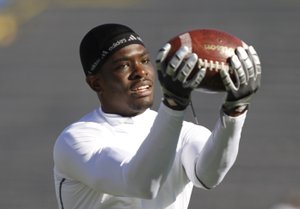 Another former Kansas University football player is facing charges in a robbery case that already ensnared Chris Martin, a once-touted defensive end, and two others, in May.

Chris Omigie, a former wide receiver from Arlington, Texas, was arrested today in Johnson County on suspicion of aggravated robbery in connection with a May home invasion in southwest Lawrence.

He was the fourth person to be arrested as Lawrence police investigated a May 13 robbery of cash and marijuana at gunpoint from a man at a home in the 1900 block of Camelback Drive. Also charged in the case were Jeremiah Letrell Edwards, 21, of Garland, Texas; Joshua Edwards, 28, of Lawrence; and Martin, 21, of Oakland, Calif.

Omigie played as a junior for the Kansas football team last year. He previously ran into legal trouble with a DUI arrest here in 2011. He is not listed on the team's roster this year.