Kansas running back Darrian Miller (6) weaves through some pads as he works out with the running backs and fullbacks during the first day of football practice on Thursday, Aug. 8, 2013. Nick Krug/Journal-World Photo

Unable to contribute but living and dying with every play in 2012 all the same, Kansas University quarterback Jake Heaps could not believe what was happening on the KU sideline late during the Jayhawks’ home loss to Texas. 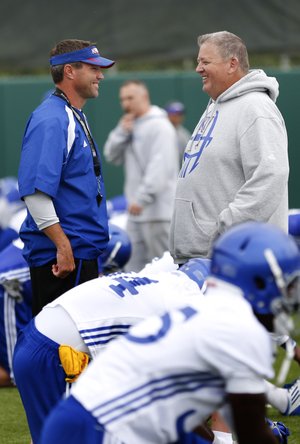 With KU clinging to a three-point lead and time slowly ticking away, Heaps, who red-shirted after transferring from BYU, remembered feeling as if the Jayhawks were on the brink of their second win during a rough season. Not everybody was with him.

“We were on the sidelines and guys were looking around like, ‘Man, we might win this game,’ instead of like, ‘We got this,’” Heaps recalled earlier this week. “I couldn’t believe we were like that. How could we think like that? We’ve been beating these guys all game long.”

As it turned out, the “might” that Heaps spoke about was somewhat prophetic, as the Longhorns tacked on a touchdown with 12 seconds left and dropped KU to 1-7, the seventh consecutive loss in a season that ended 1-11.

Despite that heartbreaking loss, the torturous season and three consecutive years of forgettable football that have been played in Memorial Stadium, the Jayhawks entered fall camp on Thursday with an unexpected amount of confidence. The players say there are plenty of reasons they believe this year will be different, and Heaps says making sure that mindset was strong was a major focus of the past few months.

“We’ve really worked on our confidence, which we have to work for,” he said. “You have to work in the offseason, you have to work extremely hard in the weight room and off the field and in your route-running and seven-on-seven and we met extra watching film and all that stuff. So these guys are feeling extremely confident because they’ve put in the work. They’re prepared for this moment and we’re going to continue to try and prepare the best we can for the season.”

For the most part, the onus of keeping the Jayhawks’ heads held high has fallen on the upperclassmen, the guys who have been there and enjoyed varying degrees of success.

“You have to go in thinking that you’re gonna win every game,” said senior wideout Christian Matthews. “If we all have that confidence, you never know what will happen.”

Added junior running back Tony Pierson: “I look at the confidence coming from the spring game, carrying on to the offseason, the weight room and conditioning. I don’t see it being weird because you can’t get worse than 1-11. We only can go up. We’re just working hard and staying focused.”

Another element that has helped this team’s confidence is the infusion of more than 30 newcomers, many of them from successful high school and junior-college programs that knew nothing but winning. Both Matthews and Pierson said the arrival of a new and confident crew has provided the entire team with a lift.

“For sure,” Matthews said. “They’ve never seen losing like that, and we can feed off of them as much as they’re feeding off of us and learning from us.”

The bottom line for the Jayhawks as they enter a new season is that the slate has been wiped clean and their 6-30 combined record during the past three years no longer matters. Head coach Charlie Weis and his staff have stressed that and the players have bought it.

“He instills confidence in us and we believe in it,” Matthews said.

But it’s more than just saying they’re confident or talking about team morale that has the Jayhawks puffing their chests out and walking with a little bounce.

“When you talk about how close we were to winning games last year, it was more of a mentality than it was actually physically,” Heaps said. “These guys have improved so much as football players and it’s just been so much fun to watch. We’ve improved so much as a football team and we’re just going to continue to get better and better.”

Fall camp continues throughout the weekend and the Jayhawks will practice in full pads for the first time on Monday.

Sounds like plenty of confidence going into the start of practice. I'm ready for some football, "KANSAS FOOTBALL"!!! Rock Chalk Jayhawk!!!

On one hand, I'm pretty dang cautious. I was on the 4-6 wins bandwagon last year. On the other hand, I remember watching when the "Legend of Reesing" was born! I think that guy who lost his job to Reesing ended up having a nice career too! Anything can happen. This is an awesome time of year.

It probably hurts team confidence a little when fans make a mass exodus at half time. Has to make them think we have no confidence in them. Maybe this season fans will stay to the end. We won't win every game but we should be there rooting them on until the end of every game.

There is no fan base anywhere who feels more entitled with less justification than the one centered on Snob Hill. Too many grew up with a lot of things they never earned but felt they deserved anyway. It is no wonder that Johnson County is the hardest place in Metro KC to collect overdue debts from people maintaining inflated self-images. It's not necessarily right or wrong – but it certainly is so.

You complain about the audacity of people.. yet you are apparently a debt collector... Someone hand me an irony towel..I'm drenched in it.

It's honest job & someone's got to do it. I'd rather be a debt collector than a deadbeat.

Heaps comments pretty much confirmed what I've been thinking (and typing on here for several months now) and that is that KU football doesn't know how to win games. They don't have the mindset of "we're going to win" but instead "I hope we hold them" and that is the biggest "legacy" of Turner Gill. Gill destroyed KU football's confidence to win games when they went out and lost to NDSU in Gill's first game. It's also not a problem that doesn't get corrected overnight either. My hope is that the OSU, Texas, and Texas Tech games were enough for these players to sit back and say "we're good enough to beat these teams" and when they're in a situation to potentially beat some of these teams, past close calls will remind them that they are good enough. Jake Heaps is absolutely right that KU's mindset has to be "Let's finish this" instead of "here we go again" and if KU has the first mindset, then we'll start to see some real progress and if it's the latter, then it will be another long season of winning 1 or 2 games this year.

It is easy to sound confident early in practice. I am guessing that a similar article was written about this time about last year's team.

By they go ahead and blame Gill all you want but take out 2007 and look,at how many 4th quarter leads/ opportunities Mangino's teams blew. It was a lot.

Yes, Mangino's teams lost quite a few close games, but they also won a handful of them and it wasn't assumed KU would blow every lead they had under him. There was always a feeling that KU could pull the upset and they did pull quite a few of them during Mangino's run. Colorado and Southern Miss in 2009, Missouri and Iowa St. in 2008, KSU, TAMU, Colorado, and VT in 2007, ULM, South Florida, and Colorado in 2006, Iowa St. to get bowl eligible in 2005, KSU in 2004. Maybe not as many close wins as close losses, and maybe not against the top competition, but that's still enough to say that a KU team in a close game under Mangino wasn't a near guaranteed loss like it was under Gill. Gill's horrendous conditioning program and complete lack of emotion made KU football soft and mentally weak and appear to not really care if they won or lost. Last year under Weis, it was at least obvious his players cared and it was at least a baby step in the right direction that they cared. This year needs to be the next step forward and get a close win or two even if it's against non-conference or other bottom of the Big 12 teams.

In all fairness, that huge come from behind win had more to do with Coach Hawkins throwing the ball all 4th quarter so his son could break the Colorado QB record. Had he chosen to run the ball a few times, there was no way we come back and win that game.

But remember, it's not just Gill's legacy. We had lost 7 straight games under Mangino before Gill took over. Mangino had only 3 winning seasons over 8 years, and his last one was really a stinker.

KU did only have 3 winning seasons under Mangino, they were also bowl eligible 5 out of 8 years and weren't considered a cakewalk opponent like they have been the past 3 years. That's the difference between Mangino's teams and Gill's teams. You never felt like Mangino's teams didn't have a realistic chance to win or pull an upset whereas Gill's teams never gave off that feeling. Gill's teams were like being back in the mid to late 80's teams that were an absolute joke.

I think we forget how many close games we had in Gill last year. We could have had 5 wins if not for a play here or there. Now the good schools stomped us but we weren't a cakewalk. Even last year we could and should have had 4 more wins. But I'm digging the attitude Weis has installed.

It all starts with attitude, and this team appears to be headed in the right direction.

Attitude Is Everything – even more important than speed, size, strength, because it brings those, and more, in its wake.

Well, hope springs eternal, and I hope our enthusiasm is well founded. Seems like we're more cautious than optimistic this time around. And that's a good thing I think, because I don't ever want to see anything like "History Awaits" on a billboard again. That turned out to be really embarrassing -- and it's still used against us. Ugh.

Alabama has been making history not waiting for it. Much different mind set to be sure.

Yep, I am beginning to think this team is going to just explode onto the scene with sound play on both sides of the ball, know their assignments (that's where Snyder beats ya, with guys being out of place. My bet is that happens a few times before the conference play begins the guy will be ridin the pine for some time.) , put together good drives, improved kicking game, improved defense, dramatically improved passing game. And we are going to be very physical. I think we will dominate the non-conference schedule and then win 4, 5, or maybe more in conference play. Last year was no real litmus test of HCCW's ability. He and the rest of the staff needed to eval which positions were the weakest and go get a fix which they did. This year will demonstrate that our AD really did know what he was doing. He knows football and i think he will be proven out this year.

I think we can beat anyone in the conference. IMO K-State will be the hardest one to get over because of this mental thing and the pitiful performance for the last few years, although last year was close at halftime. Those 100 to 1 odds are looking like a better and better wager.

What was memorsble about the 2009 season?