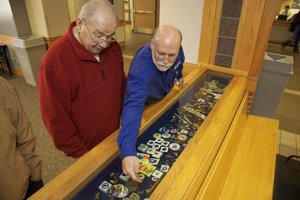 Hundreds of Jayhawk items are going up for auction after being displayed for the past three years at the Kansas Union.

A collection of more than 1,000 pieces of Kansas University memorabilia is going up for auction after spending years on display on the KU campus.

The collection's owner, Bud Jennings, put the Jayhawk memorabilia on display at the Kansas Union three years ago in hopes a collector would buy it. The price for the whole collection was $130,000, and the university's efforts to raise that money failed, said Mike Reid, director of marketing services for the KU Memorial Unions.

Jennings, a longtime Lawrence carpet store owner, was 80 and retired when he brought his flock of Jayhawks to display on the Kansas Union's second and fourth floors. He had started the collection in 1939.

The many statues and sculptures are made from bronze, copper and the more unusual acrylic. Many have historical significance, including an early model that KU art professor Elden Tefft used to create the iconic statue in front of Strong Hall.

Other items are more whimsical. There’s the rare full bottle of “Jayhawk” soda, bottled in Ottawa decades ago. In the fourth floor display, among fundraising pins and other small items, sat what Jennings called “the smallest Jayhawk in the world.”

Resting on the head of a penny, its features are just barely visible inside the glass case. If you look hard enough, you can make out the letters “KU” painted on its chest, Jennings said.

Earlier this year, Jennings told KU officials that he had decided to sell the collection to provide for his retirement, Reid said. The majority of the memorabilia has already been boxed up and removed from the student union, and some of it will be up for sale on eBay as soon as next week. The rest will likely be sold at an auction in Lawrence in about three months. A date for the auction has not yet been set.

Pretty sure investing in jayhawk tchotchkes is not a solid retirement plan. Now, buying up all the addidas urban camo uniforms to resale later. That's where the money is!

What's the coolest or dumbest item you own with a jayhawk on it?

Man..the second oldest memory I have is resting on my midnight blue plush velvet square pillow (with the official Jayhawk embroidered on it)... when I WAS 18 MONTHS OLD...still have it. 31 years later

I have a pretty cool stuffed frog with a KU shirt on it and it " ribbit's " the Jayhawk fight song when you press it's foot.

I have a hunk of marble that I got when I graduated. It's sitting on my desk right in front of me... but I guess it doesn't have a Jayhawk, just the university seal. It's the most expensive paperweight I own.

Dumbest would be a toilet seat cover with a Jayhawk on it. Lift the lid and it says go team. The coolest is tough as I have a rather sizable amount of stuff (not sure if that's dumb or cool in and of itself).

Coolest, a gold Big 8 Championship ring with a Jayhawk on the side among other things.

To see pictures click on the link to the left. If you go to the Journal World site, the pictures from the viceo don't display.

If you haven't already sold this collection - please don't.

If you want / need to raise money, have a bake sale or maybe the Jayhawks cheerleaders would help out with a carwash - anything but this !!!

You don't want to live the rest of your life without this stuff. Life is too short to not be surrounded by Jayhawk memorabilia !!!!

Nuleaf, unfortunately Bud (Mr. Jennings) is not in good health these days, which is the reason behind the sale. My family worked with Bud a lot as we built residential housing in Lawrence through the 80's and early 90's. Bud has made several unbelievably cool bronze Jayhawks for my older brother over the years (some are 12" tall) and he is so very talented. It's sad that his health is deteriorating. I will do my best to purchase a piece of his memorabilia knowing Bud collected or even made it.

I'm sorry to hear that he's not in good health, and it's cool that you are familiar with him. As with a lot of things that I say / think / type - I was just messing around. I was sincere in saying that life is too short ( no matter who you are ) to not be surrounded by Jayhawk stuff !! RCJH

Dude, he is now a 'Hawk-togenarian' . . . so "rest of your life" is kind of a relative measure at this point, don't you think? I'm just glad he is both showcasing his collection (in the Student Unions for all to see) and now willing to sell it to whomever might also treasure these iconic Jayhawk keepsakes -- as opposed to keeping it hidden within a bunch of old boxes in a dusty attic somewhere, or bequeathing to family members who may do likewise.

Maybe a prospective buyer will also feel properly led to display this collection for the good of the Jayhawk Nation as well -- there are many generous KU benefactors out there as we have been blessed to see over the years. Most notably the Booth family who bought Naismith's Original Rules of Basketball -- can't wait to see the new facility that will showcase that historic document.

Unlike many college mascots, the Jayhawk is unique on many levels -- from a historic perspective as a term used during the Civil War to symbolize Kansas as a 'Free State' to its unique 'look' and color scheme . . . 'mythical bird' you say? No, the Jayhawk is indeed very REAL and its history and connection to the University of Kansas should be not only protected, but indeed 'celebrated' for the whole world to see.

I have a nice little bronze Jayhawk that is smiling on one side, and frowning on the other. I'd love to have some of his other bronze Jayhawks to sit with mine.

My favorite is my program from the 1950-51 Russell High School Athletic Banquet with the autograph of the Guest Speaker, Forrest C. Allen

CALL DAVID BOOTH, BUY THE ENTIRE COLLECTION AS ONE BLOC AND USE IT TO AS DECOR TO SPREAD THRUOUT THE BUILDING HOUSING "THE RULES" !!!!!

KU needs to buy the collection. It will be a shame if he has to sell all his KU stuff on ebay or craigslist.

It appears that Mr. Jennings and I have something in common, In one of the photos, randomly included in a case full of unique items, is a Wheaties box with a Jayhawk on it. It looks sort of out of place there. But, somehow, he must have valued this enough to display it, just as I have done in my "Man/Jayhawk Cave". Of course, my collection would be valued far less than his. My wife would probably put a value of about 30.00 on my "treasures". But, to me they're priceless.