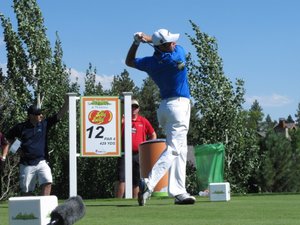 Reno, Nev. — The momentum slipping away in the Reno-Tahoe Open, Gary Woodland escaped trouble in a hurry on the par-4 14th hole.

After nearly losing his ball in the pine needles and sagebrush, Woodland chipped in from the rough from 58 feet for one of his four birdies Sunday en route to his second PGA Tour victory.

“I got lucky to find my ball on 14 there in the hazard, and I kind of chopped it out,” Woodland said. “The chip that went in, I was just trying to get it on the green, let alone go in. It was one of the best shots I’ve ever hit.”

Woodland finished with 44 points in the modified Stableford format that awards eight points for double eagle, five for eagle, two for birdie, zero for par, minus-one for bogey and minus-three for double bogey or worse.

Jonathan Byrd and Andres Romero tied for second with 35 points, and Brendon Steele had 33 at Montreux Golf Club on the edge of the Sierra.

Woodland, also the 2011 Transitions Championship winner as a tour rookie, earned $540,000 for the victory and got a spot next week in the PGA Championship.

“It felt like it was meant to be this week,” said Woodland, whose best finishes this year had been three ties for 16th at the Phoenix Open, Memorial and AT&T National.

“I tried to stay calm and really focus on what I was doing.”

Byrd had an eagle, seven birdies and a bogey to set a single-day scoring record with 18 Stableford points that would have equaled a round of 64 under the usual format.

Dicky Pride and David Mathis tied for fifth with 32 points, followed by Seung-Yui Noh and Rory Sabbatini with 31, and Chris DiMarco with 30. David Toms and Stuart Appleby tied for 16th with 26 points.

Woodland, the 2011 PGA Tour rookie of the year who played basketball at Washburn before transferring to Kansas University and becoming a golfer for the Jayhawks, didn’t have a bogey Sunday until the 17th hole thanks to some nifty work around the greens getting up and down to save par five times on the day.

“Even though I wasn’t hitting greens I was hitting it in the right spots and gave myself opportunities to get up and down,” he said.

On the front nine, Woodland had sand saves out of three greenside bunkers and made his only birdie from seven feet on the par-3 second hole.

After he drove into the waste area on the 367-yard, par-4 14th, he hit 20 yards over the green into the rough before watching his 58-foot chip roll against the pin and into the cup.

He added a 21-foot birdie putt on the next hole to open up an eight-point lead over the late-charging Byrd and Woodland’s playing partner Steele, who made his birdie putt ahead of Woodland on the 15th.

“To follow up after Brendon Steele made the putt on 15, to answer him was huge,” Woodland said. “He had a lot of momentum and I sort of stole it all back and sort of rode it the rest of the way.”

He closed with a birdie on the 616-yard 18th when he drove 338 yards into the middle of the fairway, hit his approach 231 yards just in front of the green, chipped to two feet and tapped in for the win that also earned him his tour card for the next two years and boosted him from 116th to 54th in the FedExCup standings.

Woodland would have had to finish in the top 125 in Tour earnings this season to keep his PGA Tour card, and entering the weekend he ranked right at 125th.

Now Woodland is exempt through the 2015 season.

Byrd birdied five of his first seven holes then eagled the par-5 13th when he hit his second shot 219 yards to inside 7 feet.

“My whole mind-set was just to be a little more aggressive and give ourselves chances and just free it up,” he said. “And I was able to do that today getting off to a hot start. ... Just felt like I was off to the races.”

Romero, who finished third at Reno last year and was this year’s second-round leader, had five birdies and a bogey to jump from 137th to 110th in FedExCup points.

The top 125 advance to the playoffs.

Nice going, Gary. Talk about a convincing way to take the PGA Tour card issue off the table! Now, keep the momentum going into the PGA Championship!

Great job Woody! On a side note...he wasn't the 2011 PGA tour rookie of the year, that went to Keegan Bradley.

Congrats Gary! Put some good rounds together at the PGA Championship...we'll be rooting for you.

Wise choice to not play at Bridgestone this weekend and end up as Tiger meat. Nice win!

He didn't have the option to go to Bridgestone. Only the top 64-75 people in the world rankings get invited to WGC events. Gary is now ranked 152 - up from 268 a week ago. Last year he ended at 152 so he is at a good place to end this year better than he started. Progress.

Hope he comes back to a football or basketball game so we can give him some much deserved applause. The announcer on TV was Matt Gogel-- a Jayhawk as well. He explained "Rock Chalk Jayhawk" when Woodland made his putt on 18. I almost expected to hear a Rockchalk chant coming from the announcer's booth after that.

Oh, and on 18, iirc, his drive and second shot were with irons.

"Woodland finished with 44 points in the modified Stableford format ..."

So what exactly was wrong with the ORIGINAL Stableford format? Just wondering.

Seriously, major congrats to Gary. (And hopefully, after next week I can say that literally.)

Congrats to Woodland. Having said that, I have never understood the phrase "get up and down" as it relates to golf. Even if there is some round about explanation for what it means, I find the whole term badly manufactured in a weak attempt to generate sports lingo.