Kansas' Maggie Hull is unable to come up with the ball after diving for it in foul territory during Kansas' game against Baylor Sunday afternoon at Arrocha Ballpark. 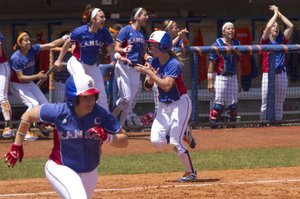 In a clutch situation, Kansas University softball first baseman Mariah Montgomery did exactly what was needed. She just ended up hitting the ball too hard.

With the tying run on second and two outs in the bottom of the seventh of Baylor’s 5-4 victory over KU on Sunday at Arrocha Ballpark, Montgomery knocked a solid single into right — one hit so sharply that KU coach Megan Smith was forced to throw a late stop sign at third base for pinch runner Elsa Moyer.

KU nine-hole hitter Ashley Newman couldn’t come through after that, striking out with runners at the corners to end the game.

The Jayhawks’ biggest downfall was defense. They tied a season-high with three errors.

Each of them was costly.

With the game tied at 1 in the top of the fifth, BU was handed a run when Robin Landrith scored from third with two outs after KU catcher Alex Hugo sailed a routine throw back to KU pitcher Kelsey Kessler into center field.

“That’s a hard one to explain. Not quite sure how that happens at our level,” Smith said. “Just a lack of focus. If anybody’s not focused — I don’t care how talented you are — you’re going to make mistakes, and that’s what happened today.”

Leading 3-1 in the top of the seventh, BU tacked on a pair of runs, the second with help from two more KU errors. On a Holly Holl two-out RBI single, KU center fielder Alex Jones had the ball bounce off her arm, which allowed Holl to get to second.

The next hitter, Kaitlyn Thumann, grounded it to first base, but Montgomery had that ball deflect off her and into the outfield as Holl scored to make it 5-1.

“This weekend, we lost our minds defensively,” Smith said. “We just didn’t play the game that we normally do. That’s the frustrating part.”

That final run ended up being significant after KU put together a frantic rally in the bottom of the seventh.

The Jayhawks (30-15, 5-7 Big 12) put their first three runners on to load the bases before getting a bit of good fortune. Maddie Stein popped a ball up just in front of the plate, with BU catcher Clare Hosack going into a full dive to catch it.

The ball bounced off her glove and ricocheted all the way into the BU dugout. The result was a two-RBI single, a 5-3 game, and KU runners on second and third with no outs.

Cassen Salamone followed with a flyout to center, but it wasn’t deep enough to advance the runners. Chanin Naudin smashed a lineout to second base for the second out before Montgomery came through with her single.

“I was right on what she pitched,” Montgomery said, “so I just drove it the opposite way.”

A little too hard, though, for KU to tie it.

Montgomery went 3-for-3 with a walk and two RBIs.

“It’s great that we were competitive and we won one game, but we’re at the point now where we’re good enough that we should be winning two games against a team like Baylor,” Smith said. “I think we showed that today.”