Kansas University’s unranked men’s cross country team might have caught the attention of the pollsters on Saturday morning at Rim Rock Farm. 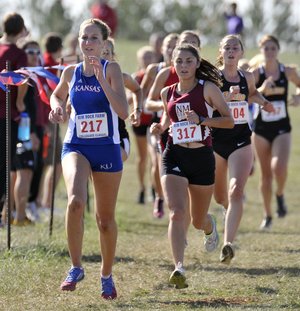 “We had a very specific race plan of what we were going to do. If the top two Indiana guys were going to go, then we needed to let them go, and the guys ran a perfect race. They hit the race plan to a ‘T.’”

However, KU runners ruled the Nos. 5 through 9 slots in winning the meet.

Donny Wasinger was able to run down his teammate, James Wilson, in the final 100 meters to earn the team’s top placement — a fifth-place finish with a time of 24:03.00. Wilson, a sophomore, finished just .3 behind the senior in sixth place and was followed by sophomores Evan Landes (24:09.10), Reid Buchanan (24:09.30) and freshman Gabe Gonzalez (24:11.30), all in succession. The top-five KU finishers clocked in just eight seconds apart to help the team earn its second team title of the 2012 season.

“We talk all the time about our small pack of five and they were fantastic — absolutely excellent execution,” Whittlesey said. “Our sixth and seventh were also right there. They are going to close the gap. Josh Munsch is coming off of injury so he has been working out for two weeks and he’s only about 25 seconds off. So I am very pleased with their execution. They did a fantastic job.”

“We took down some really good teams who are consistently really strong year-after-year. To be able to do that is a huge confidence boost and hopefully we carry it through to Wisconsin and hopefully have a big showing there (Oct. 12 in Madison, Wis.) and surprise people,” Wasinger said.

Wasinger, a 5-10 native of Winona, Minn., has high hopes for the rest of the season.

“I haven’t been feeling very good this year and to come out and be able to run with my teammates was a big surprise and a good surprise,” Wasinger said. “Yesterday, if you would have talked to me I would have said I’m a little bit hesitant to say that I was going to have a good season, but after today I have full confidence that this is going to be the best season that I am going to have at KU, not only as an individual but as a cross country team.”

Noted Whittlesey: “He didn’t come into the year in top shape and there were six guys who thought they could be the No. 1 guy. But this shows what a competitor he is. He knew what he needed to do training-wise. He’s been real focused. He got excited about what the other six guys have been doing and that helped motivate him to come back. The guy is just tough. He’s a tough competitor and you could see it in the race today, leading the team exactly like we needed him to.”

The Jayhawk women finished sixth in the team standings with 160 points.

For the second-consecutive meet, senior Kyra Kilwein was the top finisher for the KU women. The senior out of Free State High earned 21st overall, completing the 6K in 21:30.70. Fellow senior and team captain Kathleen Thompson placed 30th in a time of 21:52.20.

“Kyra did a real nice job,” Whittlesey said. “She had a real nice race. She stayed calm and started to get real aggressive the second half of the race. The effort overall was good but we have more work to do.”

Of her race, Kilwein said: “I think I executed great. My teammates helped me a lot with staying calm, confident, and working together through the first part.

“My confidence level is very high. I still need to keep building every day, make progress, and help not only me but my team get better each day.”

No. 11 Michigan won the women’s team title, collecting 33 points and also boasted the individual winner, Rebecca Addison who completed the race in 20:29.20.

“I am excited about the start of the tradition of this meet,” Whittlesey said. “A lot of coaches talked about how nice the setting was and what a good course it was. It was a great atmosphere today and a perfect day to run.”

I they are going to be national class, Donny, and maybe one other will need to close the gap time-wise. In a bigger, more elite meet, there will be too many places in minute plus between the top runners and our #1. The pack is nice, but to be elite we need at least one elite runner.

8 D-1 schools, including 5 BCS. While still not a strong field, this list appears to be light years better than we've been seeing for the last few years, especially for the Bob Timmons Classic.

This Rim Rock Classic is apparently a new meet. KU has had trouble attracting good teams to the Rim Rock course, while the high school Rim Rock meet is one of the top meets in the country, attracting teams from many states around. Does anyone have the background on this meet, and how KU was able to attract a good field for this one? I sure hope this continues.