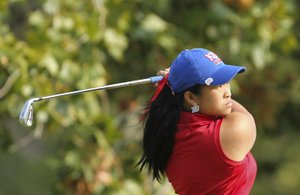 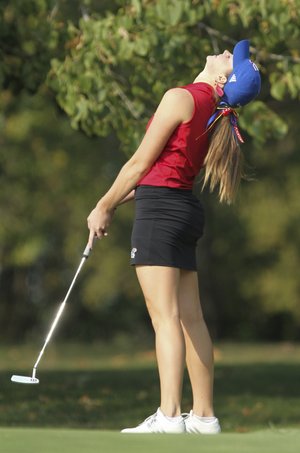 Kansas University’s women’s golfers spent a productive 11 hours at the office — in their case Alvamar Golf Club — on Monday.

“A 36-hole day is like a marathon, so you just have to pace yourself. They did a good job of it,” KU coach Erin O’Neil said Monday night after her Jayhawks carded a 36-hole score of 601, good for a 16-stroke lead over runner-up Arkansas State entering today’s final 18-hole round of the 13-team Marilynn Smith Sunflower Invitational.

“It helps that this is our home course, (but) I think this has been coming,” O’Neil said. “They did a good job of making sure they did the things they needed to keep their energy up and focus. That’s a big part of a 36-hole day. I’m encouraged by what I see. We played better in the second round (by five strokes). Overall, we’ve improved quite a bit from last season to this season.”

KU freshman Yupaporn Kawinpakorn shot a 1-over 73 in both rounds and trailed Arkansas State’s Abigail Laker by three shots. Tourney leader Laker had rounds of 74 and 69.

KU’s Kawinpakorn is a freshman from Samutprakan, Thailand.

“It’s her second college tournament. She has a very soli d golf swing, a great short game. She was a lot of fun to watch today,” O’Neil said. “She had eight or nine birdies, which is always a good thing. I think if we can help her get a couple bogies out of there, she could walk away with a little trophy or hardware.”

Boonraksasat is a junior from Nonthaburi, Thailand.

“If she could have had a few putts drop, she would have been under par. She’s close to breaking through, too,” O’Neil said.

I appreciate these stories. Keep 'em coming. Rock Chalk for every KU sport.