Kansas University’s soccer team opened Big 12 Conference play with a 2-1 victory over No. 7 Oklahoma State on Friday at the Jayhawk Soccer Complex. 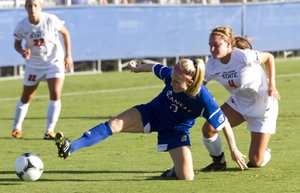 The Jayhawks (7-2-1 overall, 1-0 Big 12) attacked the Cowgirls (9-2-0, 0-1) from the start. Freshman Courtney Dickerson kicked in KU’s first goal just three minutes into the game, and Kansas held its 1-0 lead well into the second half. OSU’s Megan Marchesano evened the score in the 69th minute, but less than 30 seconds later, KU senior Whitney Berry drew a penalty kick, which she converted past OSU All-American goalkeeper Adrianna Franch.

Franch’s counterpart in the KU goal, sophomore Kaitlyn Stroud, helped hold off a last-seconds OSU attack off a corner kick to earn the Jayhawks their first win over the Cowgirls since 2005.

The victory was also KU’s first over an opponent in the top 10 since 2008.

Kansas will continue its Big 12 schedule next week with its first road trip of the season. KU will play Baylor at 7 p.m. Friday in Waco, Texas, before facing TCU at 1 p.m. on Saturday in Fort Worth.

Congrats to our lady footie players! Huge step in what has been a building program. Would love to see some more upsets this year and another NCAA trip! Keep up the good work!

Congrats to the lady jayhawks for the big win. We've seen steady progress from the soccer team the last couple of years. Lets keep up this upward trajectory.

Wonder if any of them can kick a football.