Kansas wide receiver JaCorey Shepherd (89) hauls in a pass against Kansas State on Saturday, Oct. 22, 2011, at Memorial Stadium. Shepherd was a receiver last year, but he since has switched sides and is climbing the depth chart at cornerback. 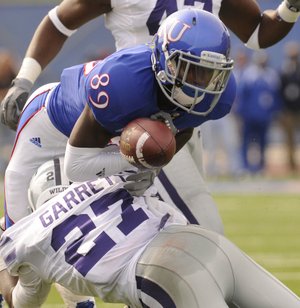 Kansas wide receiver JaCorey Shepherd (89) hauls in a pass against Kansas State on Saturday, Oct. 22, 2011, at Memorial Stadium. Shepherd was a receiver last year, but he since has switched sides and is climbing the depth chart at cornerback.

One of the most subtle tweaks to this week’s Kansas University football depth chart came at boundary cornerback, where sophomore JaCorey Shepherd moved into the two-deep as a back-up to starter Tyler Patmon.

Shepherd, 5-foot-11, 185 pounds, first made a name for himself at Kansas by leading the Jayhawks in receiving as a true freshman but moved to defense at the start of the season. KU coach Charlie Weis said the Mesquite, Texas, native’s fast rise in the opposite huddle was not a sign that he struggled on offense.

“I think Jacorey Shepherd would be a fine slot receiver,” Weis said. “I think he sees himself with a better opportunity on defense.”

Shepherd has not played in KU’s first three games, a fact that starkly constrasts the way he kicked off his career with a two-touchdown, 107-yard performance in last year’s season opener. But that’s not because he hasn’t impressed the coaches, especially defensive coordinator Dave Campo. A few weeks ago, Campo said Shepherd was one of the offensive players he had his eye on from the start of camp.

“Campo has been tooting his horn now,” Weis said. “First of all, we had to have a trade between the offense and the defense. There were draft choices and considerations for down the road on this one.”

Shepherd’s teammates have been impressed by how quickly he has adapted.

“The corner position comes naturally to him,” Patmon said. “He’s very smooth, and right now his athleticism is pretty much taking care of everything.”

With Patmon and Greg Brown playing every defensive snap at cornerback for the Jayhawks so far, Shepherd remains a mystery.

“He’s worked his way into the two-deep with a limited amount of coaching and a limited amount of time,” said Campo, who said the staff was looking for “athletes who can run.” “I like him. What he does when he gets out on the field I have no idea because he has no experience.”

The last time the Jayhawks won a road football game was Sept. 12, 2009, in El Paso, Texas, when the Jayhawks topped UTEP, 34-7, during the second game of the season. Even though a handful of players on this year’s roster were on that team, it might be tough to remember which ones.

“Daymond (Patterson) was on defense, Toben (Opurum) was a running back still, I was a receiver,” recalled senior safety Bradley McDougald. “I definitely remember the feeling of winning, just that feeling of going to someone else’s house and getting the victory.”

Even though it’s been 13 straight road losses since then, or perhaps because of that fact, senior defensive end Toben Opurum remembers it, too.

“There’ve definitely been a whole lot of changes from players on the field to coaches coaching,” Opurum said. “I remember looking ahead to the future and thinking that the backfield would be me, Rell Lewis and Kale Pick and that’s not what it looks like at all.”

A 2:30 p.m. Saturday in DeKalb, Ill., the Jayhawks (1-2) will look to break that losing streak while snapping Northern Illinois’ 16-game home winning streak at the same time.

Saturday’s contest will give former Eudora High standout Boomer Mays his first crack at playing against the Jayhawks. Mays, a red-shirt freshman who is listed as a second-string middle linebacker for the Huskies, red-shirted during his first season with NIU and did not play during the Huskies’ 45-42 loss in 2011.

Things are different for Mays this year. The former first-team all-state selection and two-time EHS team captain has played in all three games and recorded seven tackles, including two for loss. One of those came against Army last week, when Mays wrestled Army quarterback Trent Steelman to the ground on a fourth-and-three play with 1:47 left and NIU leading Army, 41-40.

After the game, NIU coach Dave Doeren had high praise for his young linebacker.

“Boomer’s a very aggressive player,” Doeren said. “This game kind of fit what Boomer is. He’s a downhill thumper. So this was a good game for his skill set.”

Shepard's an athlete and if Campo thinks he's better suited a DB, I'm all for it. Let's get the road victory, 'Hawks!

I'll trust the eyes of Campo but I thought Shepard showed some promise as a receiver.

Put the bruisers on offense and the speed on defense, Bourbon at linebacker?

Shepherd has the speed, but he could be a guy that could be used on offense in situations.

I also like Parmalee getting his chance at returning kicks, and if he can line up in the slot or even the Jayhawk formation as one of the options, he could be a real asset to this team.

I think we'll see the Jayhawk 4 or 5 times on Saturday since Sims is back as well.

Parmalee was actually lined up in the slot some last week. I bet he gets his first catch this week.

I don't want to see the Jayhawk formation again until we do something different with it. Until I see a pass, it's just a different running formation. We should run it, but as a sweep to give Sims, or my personal choice Matthews, an option to pass it downfield or turn it up through his choice of lanes. I say Matthews because he ran the read-option so well against Misery last year, and he's a former QB. However I'm sure Cummings could run this play effectively too.

As long as we keep running it up the gut, it's just a predictable play, and it keeps getting stuffed.

What is the Jayhawk Formation? Does it look like one from the stands?

When did K-State become a rival---last time I checked they are just the little step-child.

They could win the next 35 times in football and we would still have a better record against them...don't get me started about basketball...and don't bring up other sports I just don't care.

c'mon gardenjay. I don't even get Weis's radio show in Texas, but you do in Garden City. This was either you aren't paying attention or a pathetic attempt at sarcasm.

Shepherd has not played in KU’s first three games, a fact that starkly constrasts the way he kicked off his career with a two-touchdown, 107-yard performance in last year’s season opener. But that’s not because he hasn’t impressed the coaches, "

I guess as long as he's impressing the coaches he should feel great about riding the pine and not helping us win with his play on the field.

All of a sudden, I feel much better about not being promoted to CEO of my company. I'm sure that I've impressed the coaches (owners/management).

I'm not sure about the coaches but you've impressed me. Well at least your wife has. I mean anyone who can spot Rodney Dangerfield on the football field is impressive . . . funniest post I've read all year long - especially your muted & smart husbandly reply.

Whatever happened to Christian Matthews? The guy who would have led us to a win vs. Ga. Tech but he was too successful on the field, so the coaches pulled him.

Yeah, okay. Not paying attention much are you?

Did you mean a win vs. Misery?

I'm with you on Matthews. Like I said above, I think he should run the Jayhawk a little. Or even put him in for a series of read option. He's really good at reading the defense, and obviously he's a good instinctive runner. He was gashing Misery last year.

After 46 years as a Jayhawk, I have come to the conclusion that, as Karmic Payback for having the great good fortune of our being Jayhawk Basketball fans, we have been obligated to be Jayhawk football fans.

I think that under Charlie, the investment is going to finally pay off!!

I got a little return during that Orange Bowl season.

Sorry for the waste of bandwidth but that is a really good lucking uniform.