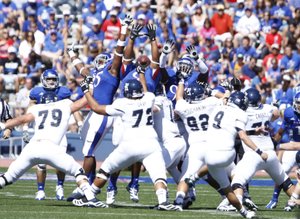 Two games into the 2012 season, Kansas University’s football team already has identified what could become a major problem: kicking.

Not only have the Jayhawks struggled to kick the ball deep on kickoffs, but they also have connected on just two of five field-goal tries.

Although none of junior place-kicker Ron Doherty’s misses directly cost the Jayhawks a game, a make on any of them would have gone a long way toward making things easier for KU coach Charlie Weis and company. On Saturday, a make on either miss (53 and 40 yards) might have won the Jayhawks the game.

Instead, Rice pulled off the come-from-behind stunner, and the Jayhawks were left to ponder what comes next.

Neither Weis nor any of his players put the blame for Saturday’s setback on Doherty’s foot.

“Missed field goals for any team always hurts,” senior Daymond Patterson said. “But he shouldn’t have been in some of the positions he was in. If anything, the field goals should’ve been a lot closer.”

Part of Weis’ worries about his kicking game coming into the season came from putting too much responsibility on Doherty, who also serves as KU’s punter. After allowing Doherty to handle kickoffs in the opener, Weis turned to newcomer Nick Prolago for that role Saturday. Right away, the sophomore from Olathe delivered, bombing the opening kickoff eight yards deep into the end zone for a touchback. The rest of Prolago’s day was merely average, but Weis said he liked the way Prolago responded to the opportunity.

“Well, it was nice to start off the game with a touchback,” Weis said. “I think for his first game out there, we actually had an improvement at the kicker position in our kickoff coverage.”

For the second straight week, Weis threw a little excitement into the gameplan early. But after connecting on a 43-yard trick play to Kale Pick on the first play of the season, things did not go as well in Week 2.

After starting in the “Jayhawk” formation and opening KU’s first offensive series with a direct snap to tailback Tony Pierson, the second snap again went to Pierson, who quickly handed it off to Patterson. Instead of running with it, Patterson flipped it to quarterback Dayne Crist, who braced to deliver a bomb to Pick flying down the field. Crist was hit as he threw, the ball fluttered in the air, and Rice cornerback Bryce Callahan picked it off near midfield.

“I was really disappointed,” Weis said. “When you call a special play early in the game and you give up pressure on a play that there’s no way there’s pressure that comes, it’s really disappointing. The worst thing that should happen is a long foul ball. But I thought the team responded nicely.”

Said Crist of the opening pass: “It was a trick play. There was some pressure. I thought I could get it off, and I didn’t really see that guy coming. It looked like (Pick) was even with the guy so I thought we’d have a chance to connect, and obviously that wasn’t the case.”

Mundine on the mark

Sophomore tight end Jimmay Mundine’s first-quarter touchdown grab was his first of the season and the second of his career. Mundine finished with three catches for 39 yards and, each time, seemed to find a way to use his 6-foot-2, 243-pound frame to move defenders a couple of extra yards.

“Jimmay’s always striving to improve and get better,” Crist said. “And, within the reads today, he made himself very available.”

After hauling in a 12-yard pass for a first down early in the third quarter, Pick had to be helped off the field and did not return.

The senior from Dodge City finished with two catches for 22 yards and could be seen trying to work out the injury to his left leg on the sideline throughout the rest of the game.

“I have no idea,” Weis said when asked how badly Pick was hurt. “When he was trying to get off the field in a hurry at the end of the game after the alma mater, I told him to slow down, I know that. But I’ll have a better idea tomorrow.”

“It’s unfortunate, and we wish Kale the best,” Crist said. “No one’s rooting harder for him than I am.”

The Jayhawks won Saturday’s opening coin toss and elected to defer their choice to the second half. Rice chose to receive the opening kickoff. ... Tony Pierson (19 carries for 120 yards) topped the 100-yard mark for the second straight week. ... Kande made the first start of his career at outside linebacker. ... Red-shirt freshman Jake Love served as the team’s fourth captain after being voted by KU’s coaches as the top special-teams performer in Week 1. ... Temperature at kickoff was 72 degrees, under sunny skies with winds of 12 mph out of the northwest.

Since nobody else has had a chance to slam you to the dirt so far: What a hateful thing to say. You are clearly unwanted and the scourge of this site. Why do you continue to state such rotten, horrible, unjust comments. Go crawl back into your hole!

Now that we have that out of the way, I rather enjoy your commentary, keep up the good work :-)

We are going to get better.

This program has a much better trajectory under this AD and this coaching staff than any time I can remember.

Two questions / concerns: 1. I don't understand why we don't use more blitz packages? Our cover guys are ok, but generally our pressure on qb has been poor and we clearly don't have the talent on the line to provide pressure with 4.

He is literally never a threat for a positive scramble, and hasn't been very good at avoiding the sack. That is acceptable if Joe Montana, but starting to wonder if a more versatile option exists if his accuracy doesn't improve.

That miss to Pick in the end zone was a missed td and an awful throw.

I don't know about kicking but I do know that the right side of the offensive line cannot block. THAT is a big concern.

Can't WAIT to go back to work tomorrow and have some pleasant football conversation with the K-State football season ticket holders that make up .....oh...99% of the company that I work at.

I might as well man up and do it - I don't have enough vacation left to take off every Monday from now until football is over with.

I feel your pain, nuleaf.

The curious thing about the KSU crowd is that many (if not most) of them take as much or more satisfaction from a KU loss than a KSU win.

All of those who blindly thought that KU would win more games (some on this site had them going to a bowl game) this year simple because Weiss was in the helm are now understanding how this season will pan out. I had previously indicated that KU would be fortunate to win 3 games this season. Although the games should be much more competitive than last year, there is still not enough talent to win. Unfortunately, I left the game saying the same thing as many past seasons, "when does the basketball season start?"

WHY did Weis decide to go for a 53 yard goal?

Has anyone even asked him this question? What was going through his head?

We treat football coaches so nicely. A basketball coach would have been pummeled with questions for a similar head scratcher.

Kirk, I agree with you. IMO, that was the turning point of the game in terms of momentum. Why put the ball in the (foot) of a kicker who is struggling and ask him to hit a 53 yarder? Punt it down deep and take your chances on defense. I thought that was a horrible coaching decision.

I'm still flabbergasted how many posters talk up Mangino. He had a great 1-year run capped off by winning the Orange Bowl and that's it. I didn't like him once. And am glad he's gone. Weis will be better his first year than Mangino was his last year.

I support Coach Weis and the program he's trying to build. IF all any of the Kansas fans can post is negativity, Keep it to yourselves unless your pathetic lives enjoy projecting negatitivity