Kansas' Josh Ford blocks a punt by South Dakota State's Ethan Sawyer in the first half of Saturday's game at Memorial Stadium.

• Check out Ford's diving punt block at Arizona Western at the 3:40 mark of this video. 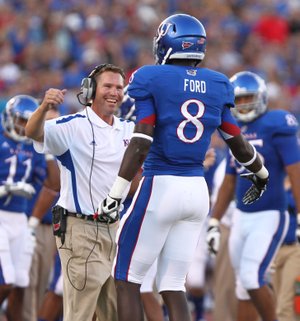 Though Kansas University receiver Josh Ford was happy with his blocked punt in Saturday’s 31-17 victory over South Dakota State, he says it’s not his best one.

“You know, in front of the punter, there’s always three big dudes?” Ford said. “I was coming straight up the middle.”

When one of the personal protectors started to block Ford high, the receiver decided to dive over him.

Ford was somersaulted in mid-air, but he also stuck a hand out to block the punt ... which was scooped up by a teammate for a touchdown.

“I was scared as hell to do it, but my coach in practice kept telling me, ‘Man, you might have to go over these dudes. They’re really big guys,’” Ford said. “I was like, ‘I’m not about to kill myself.’

“But I just didn’t even think about it, and it just happened.”

Though Ford was recruited to KU as a receiver, he certainly came with the reputation of a punt blocker as well.

Ford said he first discovered the talent in high school when, after being added to the unit, he blocked six punts in one practice.

“I don’t even think I had a backup,” Ford said with a laugh. “It was like, ‘You’re here regardless. You’re going to block the punt.’”

After watching film of Ford, who blocked seven punts his senior year at Coolidge High in Washington, D.C., coaches at Arizona Western started him on the punt-block team during his first practice as a freshman.

Though Ford was a backup receiver during his first game at Arizona Western, he still was able to block a punt.

Now, his KU career has started the same way.

“To me, I take it as just as good of a reward as it would be as making a game-winning catch, a game-winning touchdown if I were to be playing receiver,” Ford said. “It’s still a game-changing play, regardless of what position you’re in.”

Ford says one of the key for him is paying attention to the long snapper. Just before a punt, the snapper typically raises his hands high before releasing the ball, and Ford tries to time his rush accordingly.

The receiver started working with the first unit on special teams during the third day of practices at KU.

“On his recruiting trip, I think he told me he has eight blocked punts in junior college, so he made sure I knew that,” KU special teams coordinator Clint Bowen said with a smile. “He actually is pretty good at it. We’ve got him in a role that allows him some freedom.”

Ford’s block in the second quarter Saturday came from off the left edge.

“I think I got a good fit on the wing who was blocking me,” Ford said. “He only got one hand on me, (and I) ripped through it.”

Because the snap was wide, SDSU punter Ethan Sawyer was forced to move a step closer to Ford.

That also changed Ford’s angle to the football.

“In practice, we work on the aiming points: where (the punter) would kick the ball from,” Ford said. “I was going there, and I got off low, so my eyes didn’t come up until a little bit late.

“When I realized he was a little bit left of where he usually is, I kind of went past him a little bit.”

Ford was still able to reach back with his left arm to block the punt. He also has developed a bruise this week near his left ribcage, most likely left from Sawyer’s kicking foot.

After scooping up the ball, Ford was denied a touchdown by two SDSU players, who tackled him at the SDSU seven-yard line.

Bowen was pumped after the deflection.

“When I ran to the sideline, he was just cheering me on,” Ford said. “I can’t say exactly what he said on tape, but it was great.”

KU’s two blocked punts Saturday were more than the Jayhawks have had in the last three seasons combined. KU blocked one punt last year and failed to block a kick or punt in both 2009 and 2010.

During a team meeting on Sunday, KU coach Charlie Weis told his players that when teams block two punts in a game, they win 80 percent of the time.

“He’s been coaching for 33 years, and he’s been at the highest level,” Ford said. “Anything he says about football and statistics, I have no choice but to believe.”

I love it! Josh has a great attitude and really makes a great point about how important big plays on special teams are. I don't think many other players look at it the same way as he does.

I'm excited to see what Josh accomplishes during his time here at KU! Keep it going Josh!

Ahperse, time to gas up the VW bus, Berglund is on the move!

haha wow, maybe he will declare for the draft maurice claurett style

Someone needs to get that kid a red and white striped shirt, glasses, and a cap!

More impressive than his blocked punt was the de-cleater he laid on that SDSU gunner on DP's punt return. Man did he blow that kid up!!!!

How long before you post the Big12 media deal article. $20 million a school is nothing to sneeze at.

I like the special team emphasis with stats to back it up. 80% winning percentage for 2 blocked punts in a game.

Coolidge High is in Washington DC, not Landover MD. Right Josh? By the way, Coolidge has a female head coach.

Yep. You're correct. It's been fixed above.

I love that picture under the headline. If I didn't know that was a blocked punt, I would guess that Josh Ford was getting ready to deck the SDSU punter and the SDSU punter is kicking Ford in the ribs to defend himself while #38 for SDSU is racing to tackle Ford before Ford decks the punter.

Another big piece of the puzzle. Anyone who can do this is explosive off the line. Learn your stuff, Josh so we can see you at receiver.