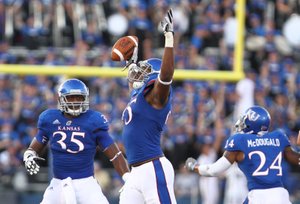 For a defense that recorded just 18 turnovers during the entire 2011 season, picking up five takeaways in one game, as Kansas University did in its season-opening victory Saturday, may seem a little bit like magic.

“I think that’s a direct result of what we’ve talked about all along,” defensive coordinator Dave Campo said, “getting to the football and making sure we’re around it because you never know.”

During the 31-17 victory against South Dakota State, the Jayhawks hauled in four interceptions — two by senior safety Bradley McDougald — and a fumble. While the turnover total may have surprised some, the execution did not.

“We talk about it every day,” said senior defensive end Josh Williams, who forced a fumble and recovered it on the same play.

The Jayhawks’ stated goal for takeaways-per-game is two. They talk about in every meeting room, during every practice and in the moments leading up to every game. But what they like better than talking about it is seeing it.

“That tells us that they’re listening to what we’re saying,” defensive line coach Buddy Wyatt said.

Although no one in a KU uniform said he expected five turnovers to become the norm, the fast start lifted the team’s confidence.

“If you get five turnovers in a game, you can’t ask for anything more than that,” junior linebacker Huldon Tharp said. “Honestly, if you can get two or three in a game, you’re happy.”

Added McDougald, who enters this week’s game against Rice tied for the NCAA lead in interceptions: “It was like a sense of accomplishment, some things were finally starting to pay off. It was definitely a great feeling, but that was Saturday, and now we’re back to square one and another opponent.”

“There’s more of them that we want to get into the game this week,” KU coach Charlie Weis said. “But I think any time they can get 10 or 20 plays in there, first rattle out of the box, we’re on our way to getting the butterflies out, now the next time out it won’t be as big a deal.”

Even though BYU transfer Jake Heaps probably does a pretty mean impersonation of Taylor McHargue, Rice’s dual-threat quarterback, don’t expect him to be rewarded with any hardware.

Heaps, who is sitting out the season because of NCAA transfer rules, was KU’s scout team offensive player of the week last week but does not figure to win the award again.

“I said, ‘If you don’t go down there and be the best player on scout team, then you and I are gonna have a problem,’” Weis said. “So I told him he only gets it once, and he got it the first week.”

While it has been well detailed how many former Jayhawks are on the coaching staff at Rice, there exists another KU-Rice connection that extends to the playing field.

Senior linebacker Kyle Prater is the son of a Jayhawk. Prater’s father, John, was an offensive lineman at KU from 1980-81.

Football is a sport.

we gotta crawl before we run. the defense did a pretty good job

There are going to be very few games that we lose if we get 5 turnovers. Now keeping that pace up will be nearly impossible.

The turnover battle is considered one of the keys to football. Extra possessions even if they don't lead to an immediate score they can lead to wearing out the other team's defense.

Don't know the percentages, but when you have a +1, +2, and so forth of turnover margin your chances of winning increase significantly.

But averaging less than 1 last season per game is deeply disappointing. What is even worse, is my guess is we averaged giving up the ball well over 2 a game.

If we have a +4 turnover margin, we will have a lot of wins.

"But averaging less than 1 last season per game is deeply disappointing. What is even worse, is my guess is we averaged giving up the ball well over 2 a game."

I didn't know we played more than 18 games. We must have gone really far in the playoffs last season. Did you do any research before allowing your fingers to start plucking keys? No?

While you did start strong on your post, it's how you finish that matters. Try to come back with an intelligent response next time. HCCW would not be giving you a passing grade for your performance on the fan post team.

I did look at our turnovers last year and we had 23, so just under 2 a game.

I hope you aren't putting money on the line based on what people post.

If all of us regular posters were in a lifeboat and one of us had to be pushed out for the rest of us to survive, who would it be?

My answer...and my point...no one. We'd all take turns hanging on to the edge of the lifeboat so we all would survive. This site is loaded with true Jayhawk alumni and fans. It wouldn't hurt to remember that, once in a awhile.

But how else will someone prove that they are the #1, best ever, most amazing Jayhawk fan on the planet? I mean, now that I read above that we didn't play 18 games, now I can increase my fandom with that new, groundbreaking, information... ( he can still hang on the side of the lifeboat though...I guess...)

I doubt everyone who posts regularly is a true KU fan. There's a couple of regular posters who it would fun to kick out of this hypothetical boat and hold their heads under water until the bubbles stop.

Really!?!? I didn't name any specific names of posters who deserve that.

I guess threatening people's lifes gets your post banned.

If we're going by that logic, then why hasn't Oakville's post been removed yet? Or the people that are naming posters?

My point was that we should all work to survive i.e. show patience with each other.....didn't work...did it??

jaybate-he could survive floating on his big thesaurus he never leaves home without!

all in jest... no malice intended as the bater is fond of quoting.

Maybe we should start putting some little symbol for takeaways, TDs or great plays on the helmets, kind of like Ohio State. Suggestions?

How about a gold version of this? 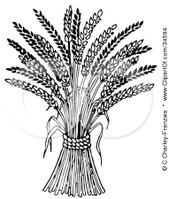 They don't play football anymore so who cares.

On these plays a player "Reaps" a bundle of wheat. The player with the most wheat on his bucket gets the title "The Grimm Reaper".

Why not a Grim Reaper on the helmets than?

That's good. You guys may be in jest but I like it. Gold wheat on Blue helmets will look great. (Please don't use yellow)

It's clear the people who didn't really pay attention to how the defense was playing last year or they wouldn't be totally shocked by the 5 turnovers forced on Saturday. KU's defense last year created 16 of their 18 turnovers during the final 7 games which comes out to an average of 2.3 turnovers forced per game during the second half of last season. I've been saying since the spring that turnovers are the key for the this team's success this year. It's why Oklahoma St. and Baylor had the success they did last year because all of the their defensive numbers were terrible aside from their turnover numbers. KU doesn't have the offense those two teams did last year, but it's still good enough to get to a bowl game if the defense can create turnovers like those two defenses did last year.

All this turnover talk is making me hungry. 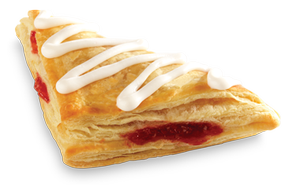 The JackRabbits made these turnovers not the defense, heck, they threw right to KU's defense. This is unlikely to happen again, Hopefully a season from now they'll have talent to make plays and turnovers. 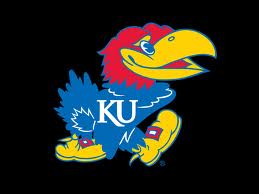 I guess you shouldn't listen to Bradley McDougald then.

Rice is a good team. A quarterback that impresses one Rice (a former KU) staffer as Reesing like and a running back that drove UCLA crazy and kept Rice in the game until UCLA managed a defense for the toss sweep.

A wonderful fall weekend, a good opponent which expects to win and one that we have good chances against. Will be a test of where we really are. RCJH

I guess the two blocked punts don't count? Taking those into account is a huge advantage.

They just can't catch anyone if they make it to the secondary.

If KU makes it to the secondary, they score.