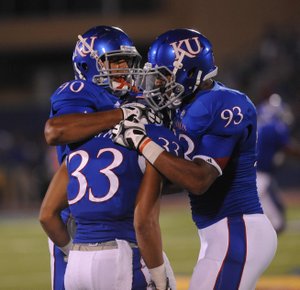 The KU football players — as promised — made their way over in front of the student section following their 31-17 victory over South Dakota State on Saturday, where they sang the alma mater with the KU students still there.

“I was generally very pleased that there were enough students there, and the band came out there,” Weis said. “Being over there for that, that’s what I’m hoping for. It’ll just get better.”

KU’s players seemed to enjoy celebrating with their fellow classmates.

Senior safety Bradley McDougald, who had two interceptions and six tackles, was the first one over, waving his hands in the air to pump up the crowd.

KU students — about half remained from the start of the game — also streamed down the aisles to be closer to the team.

“If you looked at our players, they genuinely had joy in their face,” Weis said. “Then you looked at the student body … they enjoyed connecting with the football players.”

The KU band members even rushed to the field to make sure the alma mater could be heard clearly.

“Some of the tuba players might be mad, because they’re still coming out of the stands when they started playing right there,” Weis said with a smile. “I thought it was a good start. It was a pretty good experience.”

“It was a lot of fun, because we haven’t done anything like that before,” Opurum said. “We’re glad a lot of the student section remained to the end, and we were able to interact with the crowd. It was a lot of fun, and it really helped us enjoy the victory that we had.”

Weis reiterated that it would be an every-game tradition.

“The problem is, you lose, you go over there, and there might not be anyone you’re singing with,” Weis said. “But I don’t think you can be hypocritical. I think if you’re going to do it, you should be doing it no matter what. That’s why I keep on encouraging students to be around there for it, because it makes it that much better.”

Overall, Weis said he was pleased with the atmosphere during his first game at Memorial Stadium.

“I think that the only time that it got quiet was deservedly so, because I thought there were periods of the game where we were flat,” Weis said. “Like I said to the players on the sideline, ‘Hey fellas, you’ve got to create the juice now,’ because there were times it was really loud and the fans were going nuts, and there were times it was really quiet. Usually those quiet times were directly related to how we were playing.”

I'm in Egypt at the moment so I didn't exactly get to see the crowd. How was it?

Did our students stay or did they pull the leaving-at-halftime-with-an-undecided-outcome garbage? Biggest pet peeve when I was a student was to sit in an empty student section as the Hawks had a game in the 4th.

CW was happy. In the presser, he says that he got on the players for not giving the fans more to cheer about when it got quiet.

Fans were pretty good with about 3/4ths of students staying until the start of the 4th quarter and then it dwindled off toward the end when the game was in hand. Would have been nice for people to stick around longer but that will come with winning.

Did they say what the total of people showed up tonight?

To answer Bangkok's question. Yes, half the student section left at half time when the score was 10 to 7. It was the ONLY section that cleared out.

I was sitting next to the student section and I have to say I don't really agree at all. Granted, my view of the entire section was not the greatest since I was just one section over, but I was pretty impressed with the students. I didn't see many leave at half and in all honesty, it is the alums that seem to leave at half to tailgate a little in the close lots and then decide to come back late in the second half or not come back at all.

I think it is kind of funny that Students leave early for football, but for basketball it is the opposite, the older fans leave before the students

Looked more like 2/3 of the students stayed through the end from where I was sitting.

Was sitting in the N bowl with wife and 2 kids, quickly moved with many other fellas standing at the top as it was just too tight (and warm) in the seats until sunset.

Folks should keep in mind that 3/4 full with kids, bathroom breaks, concessions, saved seats, etc. is a bit more than 3/4.

More expensive seats stay fuller, not as many little ones using the pricier ones.

Hopefully the team takes care of Rice and the students stay in the game, especially with TCU coming up at home in their first Big12 game. KU fans need to represent for the Rice game and get this team going for that big conference opener. Can't give TCU an easy intro to Big12 play. I'm sure TCU has an excellent football team, but it's only going to be their second game on the field, after what might be an easy walkover of Grambling St. Plenty of reasons to want to give them all they can handle and hopefully more in that one.

Love the new tradition but just one complaint, the team didn't stick around for the Rock Chalk chant.

So why do the students leave early/ Where's the support for the team? It's been many, many years since I was a student but we would never think of leaving early, even when getting blown out. Anyone know if there is a good reason why they leave?

An 18 year-old in a college town on a Saturday night? C'mon. Surely, you can figure this out.

OK for Saturday night but what about those games starting at 11am or even 2pm? Shoot, sometimes I had a date for the game. Having the game end at 9pm or so was just about right for later-in-the-date activities. I'll probably never understand.

Most of the students stuck around a lot longer than they have in the past. It was 2/3 full well into the 3rd quarter but probably a little less than half full by the end of the game. Not great but it will get better if the team keeps winning.

I have no idea why, but that was one of the funniest vids I have ever seen.

I sit directly across from the students. Without a doubt, 85-90% were there at second half kickoff and 80% were there midway into fourth quarter. Some posters need to get off by making it look worse than it is, to those I say sorry to say but it is getting better, go find something else to try and use to bring down the program.