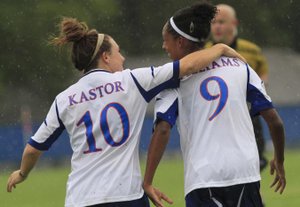 Kansas' Caroline Kastor (10) gives teammate Ashley Williams a pat on the back after Williams scored the first goal for KU against Creighton on Friday, Aug. 31, 2012, at Jayhawk Soccer Complex.

Kansas University freshman Ashley Williams scored a pair of goals and added an assist, and KU’s defense held visiting Creighton to just four shots to earn its third-straight shutout, 3-0, on a rainy Friday at the Jayhawk Soccer Complex.

KU (4-1) took an early lead on a fourth-minute goal by Williams and then made it stand up for a majority of the day. KU senior goalkeeper Kat Liebetrau needed to make just one save to notch her 11th career shutout.

The Jayhawks’ three-straight shutouts is the longest scoreless streak since the 2009 season, when KU blanked Colorado College, San Diego and South Dakota State in succession.

Senior Amy Grow was credited with the assist on Williams’ first goal.

Williams helped the Jayhawks add to their lead early in the second half when she found Caroline Kastor with a cross from the far side of the box that Kastor tapped in for her third goal of the season.

Williams sent her fourth goal of the year into the back of the net off a cross from the near side of the box by Nicole Chrisopulous in the 86th minute. Williams became the first Jayhawk with five points in a match since Ingrid Vidal had two goals and an assist against Oral Roberts on Sept. 25 of last season.