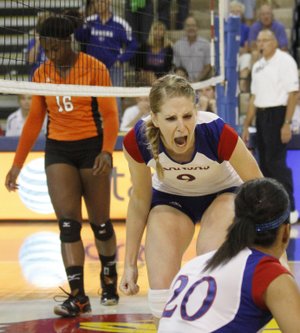 Caroline Jarmoc (9) right, celebrates with Catherine Carmichael after the Jayhawks scored the winning point against Sam Houston on Friday, Aug. 31, 2012, at Horejsi Center.

Caroline Jarmoc knew her mother, Zofia, had made the long trip from Canada to watch Caroline play volleyball for Kansas University for the first time in two years.

Jarmoc, KU’s 6-foot-2 junior middle blocker from Calgary, Alberta, had no idea, however, that another beloved family member — older sister Patricia — also would be in Lawrence on Friday for the Jayhawks’ home-opening matches of the 2012-13 season.

“I came from class, and I was sitting in the locker room. ‘Bird’ (Laura Kuhn) our (assistant) coach was telling me we had a meeting for the middles. Then the door opened and in walked my sister,” Jarmoc said of professional volleyball player Patricia Jarmoc, who plays overseas and makes her offseason home in Florida.

“I kind of lost it right away ... tears, all the happiness. I was really happy to see her,” Caroline Jarmoc added.

“My mom didn’t know my sister was coming for the surprise so both of us were shocked. My sister had never seen me play in college,” Caroline Jarmoc said of Patricia, who gets to see one more match — today’s 2 p.m. Kansas Invitational finale against Arkansas State.

On Friday, Jarmoc tied a career high with 16 kills against Sam Houston and followed that with 13 kills against Tulsa (3-3). She was instrumental as the Jayhawks (4-1) overcame a 23-19 deficit late in the fourth set against the Golden Hurricane, an NCAA Tournament team last season.

“It feels so good. We’ve been focusing on finishing games. This was proving we can finish games,” Jarmoc said.

The Jayhawks, who won the first set, fell three sets to one to Arkansas last weekend in Fayetteville.

Sara McClinton and Catherine Carmichael had 22 and 16 kills respectively (both career highs) versus Tulsa, while Brianne Riley, Jaime Mathieu and Amy Wehrs had 23, 14 and 13 digs. Erin McNorton had a career-high 57 assists.

“I thought maybe we could have gotten it over in three (sets vs. Tulsa), but to win it like that might be more meaningful because we put some kids in pressure situations that will be tough to duplicate in practice,” KU coach Ray Bechard said. “Down 23-19 it didn’t look good. We knew we were in a substitution issue (running out at the end of the fourth set), but the kids made some plays. I love the comeback. That’s kind of what happened to us last weekend in Arkansas. We pushed back tonight and got a good result.”