Coming into a rare Monday home match for Kansas University’s volleyball team, senior middle blocker Tayler Tolefree’s chief goal was to help the team get back in rhythm and provide a spark for the Jayhawks, playing for the first time since a four-set loss at Iowa State five days earlier. 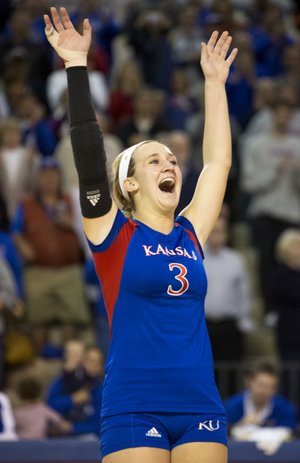 “I think after the Iowa State game, we really wanted to make a statement as a team about one (loss) doesn’t get you down,” Tolefree said. “You come back and you play strong in the next one.”

Neither, KU coach Ray Bechard pointed out, had an error.

In his 15th season leading the program, Bechard said Tolefree seemed to benefit more than anyone from the team’s recent five-day break between games, and he liked the way his middle blockers assured No. 20 KU (20-4, 8-2) of a dominating sweep against the struggling Mountaineers.

“They’ve taken a lot of sets against a lot of Big 12 teams, including us,” Bechard said, referring to KU’s four-set victory at WVU on Oct. 3.

After Tolefree became just the third player in Big 12 history go hit 1.000 in a match, junior KU setter Erin McNorton said the Jayhawks were in a rhythm and their hitters were swinging as hard as they could.

“It’s fun setting ‘T’ (Tolefree),” McNorton said after passing out a match-best 34 assists. “She’s always up. It makes my job so easy. Her and ‘Jar’ (Jarmoc) are always up there, so I just have to kind of fling it up and she just goes and gets it.”

Tolefree said every time the ball came her way against WVU, she wanted to work on the things she had been focusing on in practice, such as hitting high, and challenging the opponent’s blockers and the defense behind them.

“I feel like I’ve struggled being consistent this season,” Tolefree said. “... For me it was just a sigh of relief that I can be an offensive force. Now work on being consistent.”

The home victory — coming in KU’s first Monday match since 2003 — was the Jayhawks’ 13th of the season, tying the program record for most in a year (1978, 1991). The Jayhawks’ current 13-match winning streak is the program’s all-time best.

Awesome job, 'hawks!! Keep it up!!! That's a 13-match HOME winning streak, right? Earlier, the article said they just came off a loss to Iowa State... ?