Unable to work out an extension with James Harden, the Oklahoma City Thunder traded the Sixth Man of the Year to the Houston Rockets on Saturday night, breaking up the young core of the Western Conference champions. 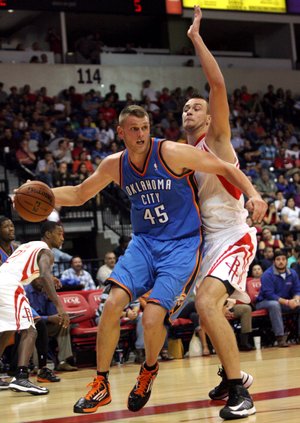 The Oct. 31 deadline to extend Harden or allow him to become a restricted free agent next July had been hanging over the Thunder from the moment they reported to training camp.

The small-market Thunder had already signed Kevin Durant, Russell Westbrook and Serge Ibaka to long-term deals, and apparently realized Harden was going to want a bigger salary than they would offer.

The Thunder got back a good scorer in Martin, who has averaged 18.4 points in his eight NBA seasons, and a promising young player in Lamb, the No. 12 pick in the draft who helped Connecticut win the 2011 NCAA championship. He led Houston's summer league team in scoring with 20 points per game.

The Rockets rebuilt their roster in the offseason and hoped to land Dwight Howard. Houston traded or released just about every veteran except Martin, who was in the final year of his contract and due about $13 million this season.

New Rockets point guard Jeremy Lin chimed in about the trade on Twitter.